The region of Piedmont (Italian: Piemonte) with its capital Turin is located in the extreme northwest of Italy. With over 25,000 km² of land area, it is the second largest after Sicily. The beginnings of viticulture go back to the Celtic people of the Taurines (who gave the capital its name) and to the Ligurians. The Romans already knew of Piedmontese wines (from Gattinara, among others), but Pliny the Elder (23-79), a polymath and also a wine writer, does not mention a single one in his list of the best ancient wines. It was not until the Middle Ages that the wines from here, produced primarily by the monasteries, became known, when minstrels praised their excellent quality. The western part became the Marche of Turin in the 11th century and this came under the rule of Savoy by marriage. Piedmont, and with it viticulture, was under French influence for many centuries. In the mid-13th century, the name "Piedmont" was used for the first time, which derives from the French pié de monte (at the foot of the mountains). Piedmont's vineyards are largely located at the foot of the Alps and Apennines on both sides of the broad upper Po Valley. It was not until 1815 that Piedmont was annexed to the Kingdom of Sardinia and, together with it, finally became part of the United Kingdom of Italy in 1861. 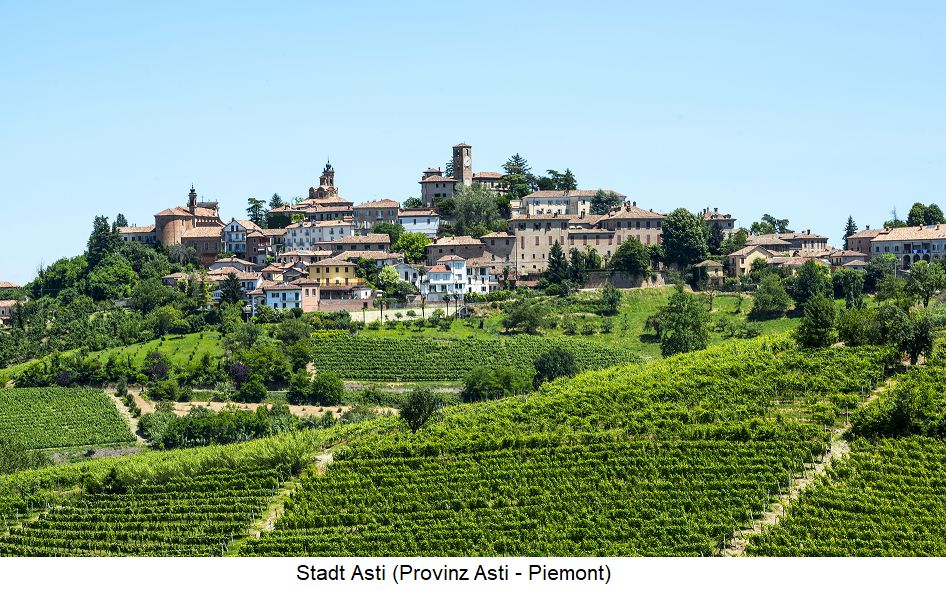 The vineyards cover 44,000 hectares. A large part is located in hilly areas on sunny slopes. The most important wine-growing areas or communal areas are Asti, Carema, Canavese, Caluso, the Vercelli and Novara mountains and the hills of Monferrato and Langhe near Alba, which are considered to be the best sites in terms of quality. There are well over a hundred authorised grape varieties (in the 19th century there were even almost 400), many of which are autochthonous. The most important white wine varieties are Arneis, Chardonnay, Erbaluce, Cortese, Favorita (Vermentino), Moscato or Moscato Bianco (Muscat Bl anc), Pinot Bianco (Pinot Blanc), Pinot Grigio (Pinot Gris) and Sauvignon (Sauvignon Blanc).

Next to Tuscany, Piedmont produces the most top wines in Italy and competes with Tuscany for first place as a top wine region. More than three-quarters of the production is accounted for by red wines. The DOCG red wines Barbaresco and Barolo, made from the Nebbiolo grape and vinified by certain producers, were the main reason for this fame. Even with these, there was still French influence, because the "birth father" of these two wines was the French oenologist Louis Oudart. In modern times, the three famous winemakers Angelo Gaja, Bruno Giacosa and Giacomo Bologna did significant development work on his Braida estate. Piedmont plays a leading role in several respects. The largest production of sparkling wine in terms of volume takes place here. The region is also the vermouth country of Italy and the world; this wine was "invented" here. There is no IGT area (country wines); the DOC and DOCG areas (quality wines) are: