The federal state of Burgenland with its capital Eisenstadt is located in the very east of Austria. It borders Slovakia to the north, Hungary to the east, Slovenia for a few kilometres to the south and the two Austrian provinces of Lower Austria and Styria to the west. Viticulture has been of great importance here for two and a half millennia, which is underlined by the saying "Extra Pannoniam non es vita; si est vita, non est ita" (Outside Pannonia , one cannot live; if one can live, then not like here), originating from the historian Johannes Aventinus (1477-1534). Along with Stillfried in the Weinviertel, the village of Zagersdorf is one of the oldest wine-growing communities in Austria, because grape seeds of the cultivated vine Vitis vinifera were discovered in a Celtic burial mound from the Hallstatt period around 700 BC.

In the first century BC, the Romans penetrated as far as the Danube and founded the province of Pannonia (historical landscape in western Hungary, which also included today's Bgld., which only became part of Austria in 1920). A new wine culture was formed when Emperor Marcus Aurelius Probus (232-282) lifted the ban on planting vines. At that time, Roman legionaries were entitled to three measures of wine per head and day. In 433 AD, the Hun king Attila conquered the province of Pannonia. The turmoil of the migration of peoples had a very negative effect on viticulture and it was not until Emperor Charlemagne (742-814) that a reconstruction was initiated, among other things by introducing nobler Franconian varieties. The right to serve wine from one's own vineyards in the Buschenschenken (Heurigen) was a great stimulus.

The greatest merit can be attributed to the Cistercians, who drained and cleared the swampy and wooded area. In 1216 they were already cultivating 99 vineyards in Heiligenkreuz (Lower Austria). From here they began to plant more vineyards around Lake Neusiedl, around Marienberg Monastery (near Oberpullendorf) and around St. Gotthard. In the 16th century, the vineyard area had reached its greatest expansion and viticulture had become the most important source of income. The Hungarian Queen Maria (1505-1558) granted great privileges to the Burgenland winegrowers. She granted the wine villages of Rust, Jois and Neusiedl am See the right to mark their wine barrels with the initial letters "R", "G" (for Geusz) and "N". The famous Ruster Ausbruch was created at this time and equated with Tokaj.

Burgenland was particularly affected by the many Turkish invasions in the 16th and 17th centuries. Despite all the turmoil of war, epidemics, bad weather and other strokes of fate, the period from the 16th to the 18th century was the absolute golden age of Burgenland viticulture, with predominantly white wines being produced at this time. Large quantities were delivered to the imperial court cellar in Wien and the particularly popular Rust wine was given the honorary title "Vinum imperatorum - imperator vinorum". At that time there were four quality classes in Burgenland: Vinum Nobile (noble wine, dried berries of the Furmint grape variety), Vinum Bonum (quality wine made from the Furmint, Weißer Augster, Blauer Augster and Muskateller varieties), Vinum Mediocre (medium quality) and Vinum Cibale (table wine).

In 1622, Count Nikolaus Esterházy (1583-1645) received from Emperor Ferdinand II. (1578-1637) the dominions of Forchtenstein and Eisenstadt as a fiefdom. This noble family promoted viticulture and wine trade and became the largest landowner in Austria. At the beginning of the 19th century, the Golden Age was over. Due to the Napoleonic Wars and crop failures, large areas of vineyards had to be abandoned and converted into arable land. In the second half of the 19th century phylloxera also struck Burgenland. Paul Vetter from Gols rendered great services in the fight against phylloxera. The area is characterised by a Pannonian-continental climate, the climate-regulating influence of the 230 km² Lake Neusiedl and relatively long growing seasons of up to 250 days. Due to the excellent climatic conditions, Burgenland is ideally suited for viticulture and is considered the red wine region of Austria. 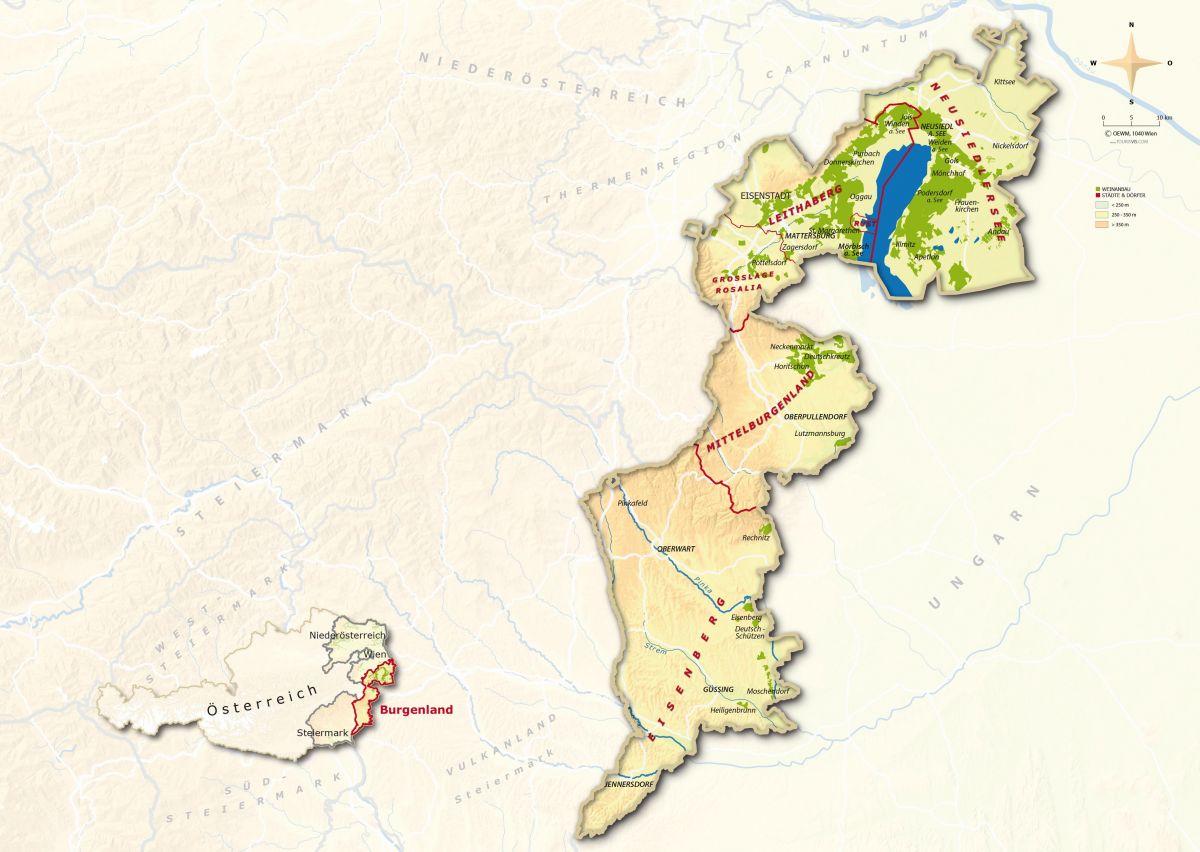 Sources of Purchase for Burgenland 56