One of the five specific wine-growing regions in the Austrian province or generic wine-growing region of Burgenland. In 2016, a restructuring took place with changes in the designations as well as the area boundaries. Leithaberg includes parts of the wine-growing regions Neusiedlersee-Hügelland (the designation no longer exists) and Neusiedlersee. These are the free city of Eisenstadt, the political district of Eisenstadt-Umgebung with the municipalities of Breitenbrunn, Donnerskirchen, Großhöflein, Hornstein, Loretto, Mörbisch, Oggau, Oslip, Purbach, Rust (special regulation since vintage 2021; see below under DAC system), St. Margarethen, Schützen am Gebirge, Siegendorf, St. Georgen, St. Margarethen, Wulkaprodersdorf and Zagersdorf, as well as the municipalities of Jois and Winden (both previously Neusiedlersee). In addition, Leithaberg was also assigned some vineyards of the municipality of Neusiedl am See, the rest of the Neusiedler Rieden belong to the wine-growing area of Neusiedlersee. 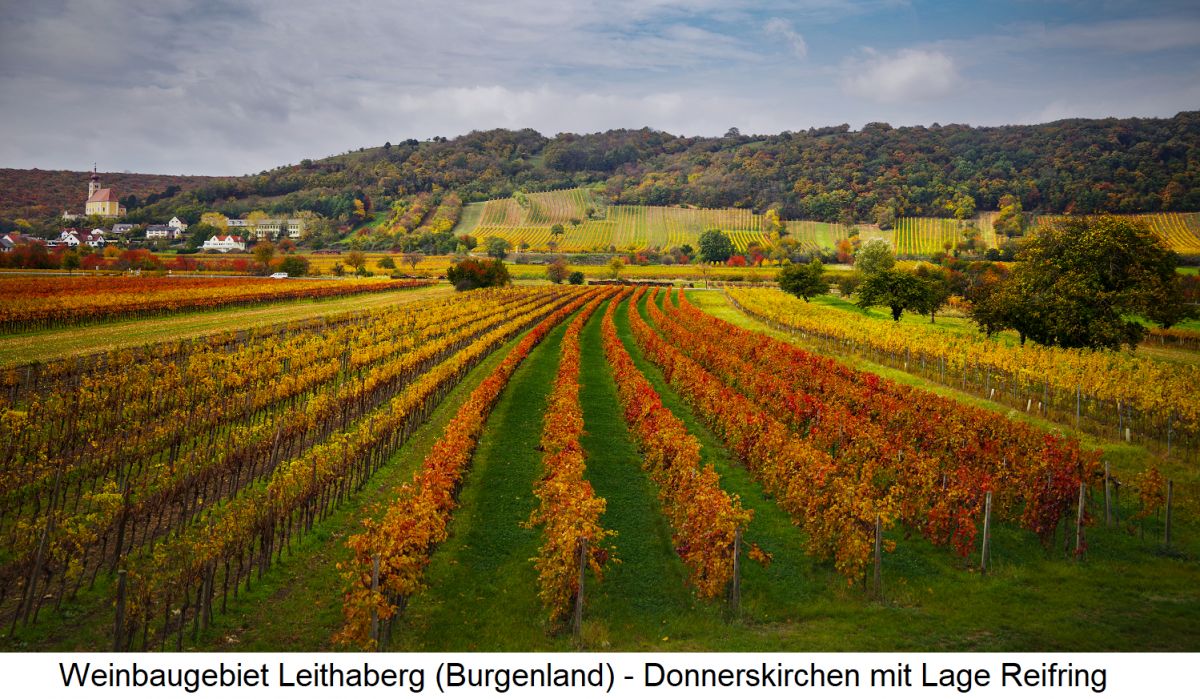 Near the municipality of Zagersdorf, Celtic burial mounds from the 7th century BC with grape seed remains were discovered. This is why the village, along with Stillfried in the Weinviertel, is one of the oldest Austrian wine-growing communities. A few centuries later, Roman settlers planted vines and thus initiated viticulture on a larger scale. Burgenland was heavily affected by Turkish invasions in the 16th and 17th centuries. The well-known legend of the "Purbach Turk", who slept through the departure of his troops due to excessive wine consumption, also dates from the time of the first Turkish siege of Vienna in 1529. When he awoke, he climbed up a chimney and got stuck at the end. He was allowed to live, later married a woman from Purbach and even became a winegrower. 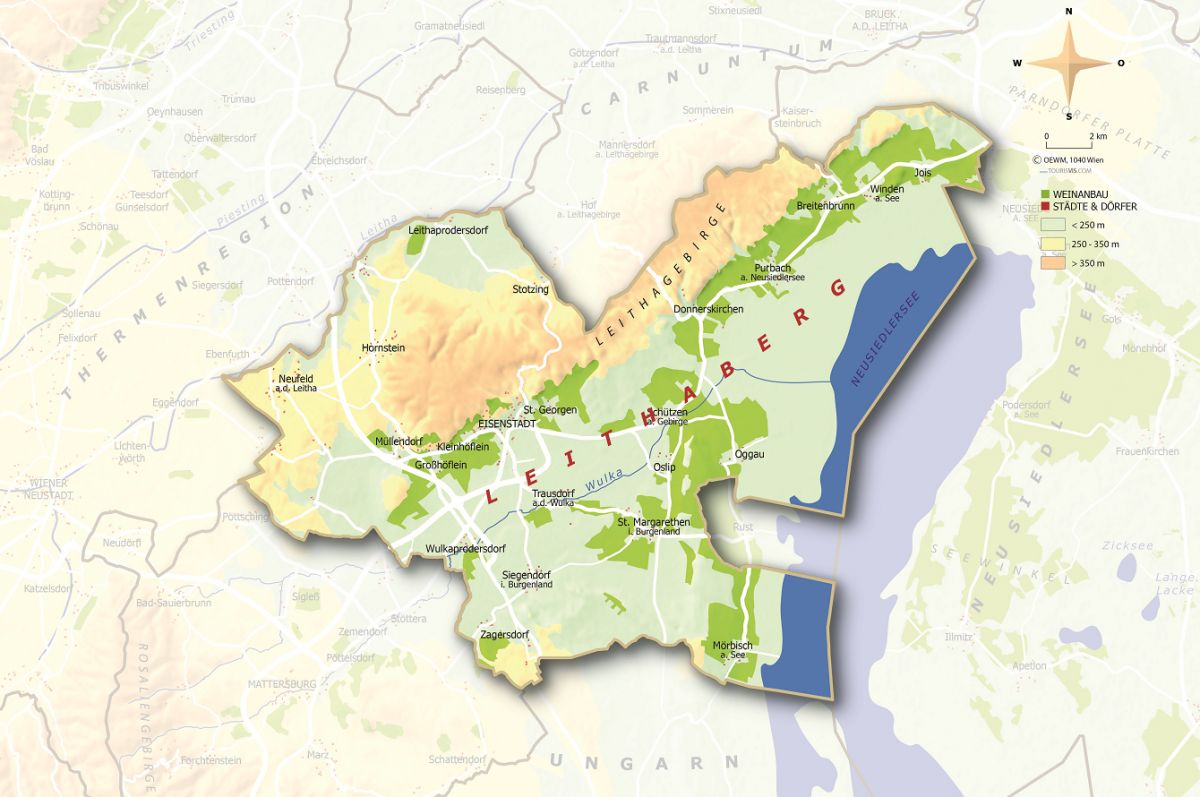 One of the oldest documented mentions of a Trockenbeerenauslese, the so-called Luther wine, comes from the municipality of Donnerskirchen in 1526. And in Mörbisch the "Opera Ball Wine" was created for the famous annual ball at the Vienna State Opera. Well-known vineyards are Altenberg, Bandkräftn, Gmärk, Goldberg, Greiner, Mariental, Steinmühle and Tatschler. The Pannonian climate is characterised by mild spring, dry summer and mostly beautiful autumn. The area stretches along the border with Hungary along Lake Neusiedl, which regulates the climate and acts as a heat reservoir. The landscape is therefore also characterised by reeds and water. The Leithagebirge, the last foothill of the Alps in the north, forms a protective wall against cold winds. The soils at about 400 metres above sea level consist of shell limestone and slate with a higher proportion of clay at the foot of the slopes.

In 2017, the vineyards covered a total of 3,097 hectares of vines. The former wine-growing region Neusiedlersee Hügelland was substantially larger in 2009 with 3,576 hectares, but this is not comparable due to changed boundaries. The share of white wine varieties is 54.7%, the share of red wine varieties 55.3%.

Starting with the 2008 vintage (red wines) and the 2009 vintage (white wines), the Leithaberg DAC quality level was introduced. In addition to the generally valid DAC conditions, special rules apply. All other quality wines must be marketed with the origin Burgenland, the country wines under the winegrowing region designation Weinland. The administration, as well as the production of the level wines for quality assurance, is carried out by the Leithaberg Association. There are red and white wines. The red wine must be pressed from Blaufränkisch, whereby a blend of up to a maximum of 15% with the varieties Pinot Noir, St. Laurent and Zweigelt is permitted. It is matured in wooden barrels with a discreet hint of wood (toast aroma). They may be marketed no earlier than 1 September of the year following the harvest.

For the white wines, the varieties Chardonnay, Grüner Veltliner, Neuburger and Weißburgunder (Pinot Blanc) can be used single-varietal or in any blend for cuvées. They are mainly matured dry in wooden barrels (regardless of size) and should show longevity and development potential. The alcohol content must be at least 12.5 to a maximum of 13.5% vol. The taste should show local typicity with the attributes spicy, elegant and mineral. A superficial primary fruit and a noticeable woody note (toast aroma) are not desired. The wines may be marketed no earlier than 1 September of the year following the harvest.

As of the restructuring that took place in 2016, the municipality of Rust did not participate in the DAC system for the time being and marketed the wines under the Burgenland origin. Since the 2020 vintage, however, the winegrowers of Rust have been allowed to market dry red wines made from Blaufränkisch, as well as white wines made from Pinot Blanc, Chardonnay, Neuburger and Grüner Veltliner, or cuvées made from these four grape varieties that comply with the DAC regulations, as Leithaberg DAC.