Unfortunately there is no information about Asti DOCG available.

The province of Asti, with the capital of the same name in the Italian region of Piedmont, covers the entire southern Monferrato hill area with 1,500 km². There are numerous DOC/DOCG areas here. These include Albugnano, Barbera d'Asti, Calosso, Dolcetto d'Asti, Freisa d'Asti, Grignolino d'Asti, Langhe, Loazzolo, Malvasia di Casorzo d'Asti, Monferrato and Terre Alfieri. For the most part, however, simple wines that can be enjoyed quickly are produced. The most famous are the made from the Moscato Bianco(Muscat Blanc), mentioned in 1203, also known as Moscato d'Asti or Moscato di Canelli. It thrives particularly well in the Langhe mountains around the town of Canelli, the centre of the sparkling wine industry. Sparkling or sparkling wines were already produced here in the Middle Ages. 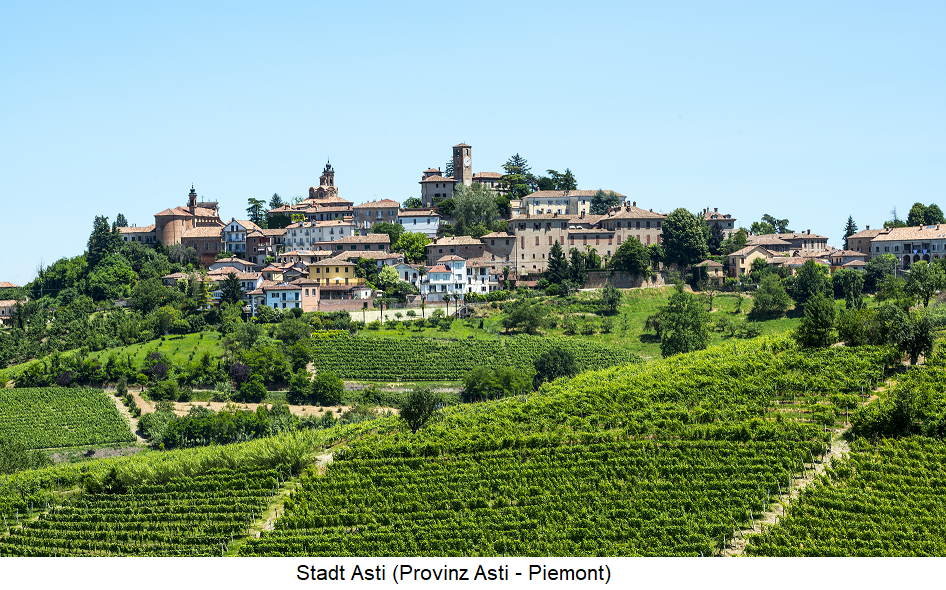 In the 17th century, when Piedmont was still part of the Duchy of Savoy, the court jeweller to the Dukes of Savoy, Giovanni Battista Croce, improved the winegrowing and cellar techniques of his dominion. In 1870, Carlo Gancia, known as the "father of Italian sparkling wine", introduced the Méthode champenoise and founded the famous white sparkling wine. The two wine types Moscato d'Asti and Asti Spumante (also known as Asti) were the first Italian sparkling wines to receive the DOCG classification in 1994. Both were first produced according to the Metodo italiano (tank fermentation = Méthode charmat), later the Asti Spumante was also produced according to the Metodo tradizionale(bottle fermentation).

The Asti DOCG zone comprises a total of 52 municipalities, mainly in the province of Asti (28 municipalities), but also extends to the two provinces of Alessandria (9) and Cueno (15). The vineyards cover a total of more than 9,000 hectares. There are three subzones: Canelli with municipalities in the two provinces of Asti and Cuneo, Santa Vittoria d'Alba with the municipality of the same name (Cuneo) and Strevi with municipalities in the province of Alessandria. These may also use their name on the label of Moscato d'Asti. The term Vigna (exposed, hilly areas) may also be used for Moscato d'Asti wines.

Asti Spumante: Until 2016 there was only one sweet version. Due to an enormous decrease in exports of over 30%, a dry Asti was also introduced in the secco, demi-sec and extra-secco versions from the 2017 vintage onwards. There are the wine types produced with tank fermentation as well as with bottle fermentation (with the addition on the label: Metodo Classico or Metodo Tradizionale). Among the best producers are Cascina Fonda, Ceretto, Cinzano, Contratto, Gancia, Fontanafredda, Martini & Rossi and Riccadonna. With around 80 million bottles a year, it is the world's leading sparkling wine producer after champagne and cava.

Moscato d'Asti: According to its characteristics a sweet, slightly sparkling wine; actually not even a frizzante (no quality judgement). There is also a variant Vendemmia Tardiva(late harvest). This wine, which is particularly popular in Italy, is milder, more fruity and far less sparkling than Asti Spumante. The bottles are usually closed with normal corks because of the low pressure and also carry a vintage indication. About four million bottles are produced annually. Well known producers are Bera Walter, Cascina Fonda, Carbonere, Ceretto, Dogliotti-Caudrina, Gatti, La Spinetta, Marcarini, Saracco, Traversa and Vignaioli di Santo Stefano.