In Austria, viticulture has been practiced since the time of settlement by the Celts almost 3,000 years ago. The Burgenland municipality of Zagersdorf and the Lower Austrian municipality of Stillfried in the Weinviertel are considered to be the oldest wine-growing communities in Austria. Grape seeds dating back to 700 and 900 BC respectively have been found in both places and can be clearly assigned to the species Vitis vinifera. The lifting of the ban on planting vines outside Italy by Emperor Domitian (51-96) by Emperor Probus (232-282) had a positive effect on viticulture. This was the beginning of an orderly viticulture in the Roman provinces of Noricum (Upper and Lower Austria) and Pannonia (Burgenland). In the almost 200-year-long turmoil of the migration of peoples from the end of the 4th century, viticulture almost came to a standstill due to many devastations. 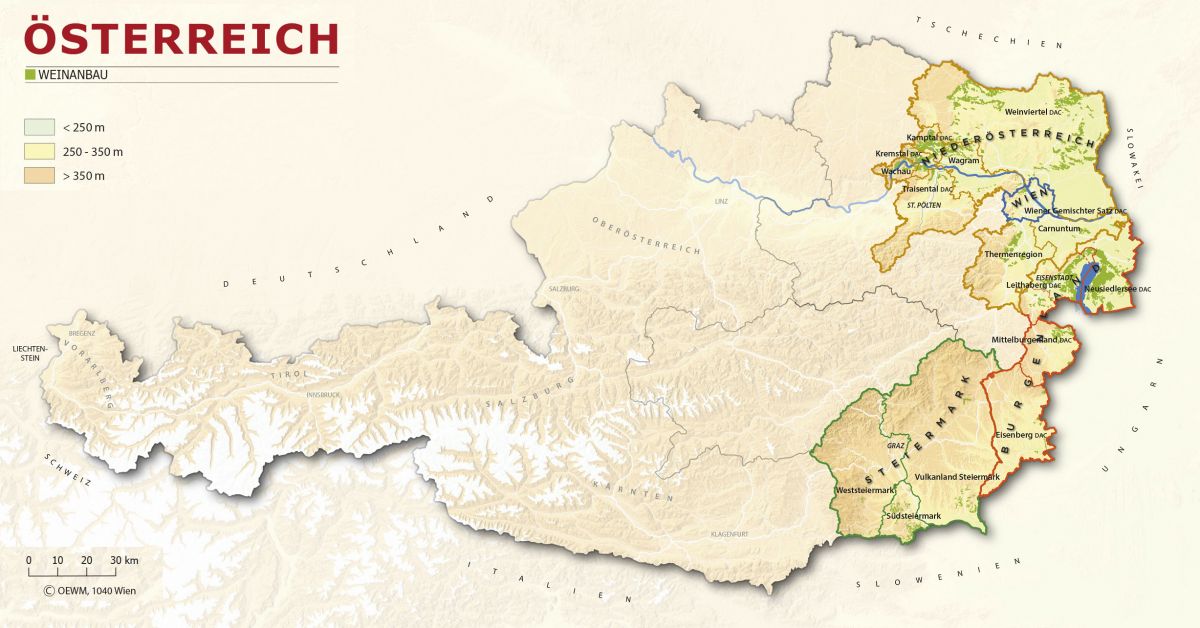 A revival only took place again from the 9th century under the influence of Emperor Charlemagne (742-814). Special merits for viticulture can be attributed to the Benedictine and Cistercian orders. In the Middle Ages, the monasteries of Göttweig Abbey (Kremstal), KlosterneuburgAbbey (Wagram), Melk Abbey (Wachau) and Heiligenkreuz Abbey (Thermenregion) were the main supporters of viticulture. The Dinstlgut (Wachau) also made a significant contribution. The oldest Austrian winegrowing regulations with rules on working hours and fixed penalties for grape theft were issued by the Habsburg Duke Albrecht II. Already in the Middle Ages there was also a division into wine quality classes.

In the 16th century, viticulture in Austria reached its peak, the area under vines was at least three times as large as today (50,000 ha) with about 150,000 to maybe even 200,000 hectares. Salzburg's Mönchsberg was planted with vines, as were the slopes of the Semmering. There were vineyards near Linz (Upper Austria), near Salzburg, and on a large scale in Carinthia and Tyrol. And the capital Wien is literally built on vineyards. The wine book of the clergyman Johann Rasch (1540-1612) describes in detail the viticulture, cellar techniques and drinking culture of the time. However, the emergence of beer, high tax burdens and the Thirty Years' War (1618-1648) brought about a decline in the 17th century. Problems were caused mainly by the tax, also called Ungeld, because it was increased from 10% to 30% within only twelve years. This led to many vineyards being grubbed up and wheat or other produce being grown instead. Now, inferior grape varieties were preferred and cheap mass wine was produced from them.

Under Maria Theresa (1717-1780) orders were issued for the utilization of cheap wine. Many vinegar boiling plants, schnapps distilleries and mustard production from grape must were established. Under emperor Josef II. (1741-1790) was permitted on 17 August 1784 in a written decree to sell the own Fechsung also in the own house. He thus laid the foundation stone for the Heuriger. In the 19th century there were some catastrophes. An extreme cold spell, fungal diseases introduced from America and, as a negative highlight, phylloxera devastated entire wine-growing regions. The pest probably reached Austria in 1867, when August-Wilhelm Freiherr von Babo (1827-1894), director of the Klosterneuburger Weinbauinstitut founded in 1860, received American vines as a gift from Germany.

A milestone in Austrian wine history was set by Robert Schlumberger (1814-1879). In 1846, he introduced his "Vöslauer white sparkling wine" produced according to the méthode champenoise, which became a great success. After the Second World War, the old structures were changed through rationalisation and mechanisation. The conversion to the new training so-called high culture by Lenz Moser III. (1905-1978) in Rohrendorf near Krems in Lower Austria made it possible to use the most modern equipment. The use of diethylene glycol caused a wine scandal in 1985. As a result, stricter laws and above all controls were introduced in Austria, which contributed decisively to the improvement of quality. In 1993, the project certification of vines was started with the aim of increasing the quality in the long term through analysis and selection of the healthiest possible vine material.

Austria is characterized by a continental Pannonian climate. There are cold winters and hot, dry summers with a long vegetation cycle. Warm, sunny summer days with often cool nights and mild autumn days are typical for most wine-growing areas. Annual precipitation averages 400 millimeters in the east, and in Styria it can even be 800 millimeters or more. The Danube and its two tributaries Krems and Kamp as well as Lake Neusiedl in Burgenland have a very positive influence on the climate. On the shores of Europe's second largest steppe lake, grapes of the Ausbruch, Beerenauslese and Trockenbeerenauslese (or Ausbruch) predicate levels often ripen in late autumn. Due to the often very low temperatures from December to January, a considerable production of ice wine is also possible in the east.

The altitude is mostly about 200 meters, in Lower Austria up to 400 meters, the highest vineyards are in Styria up to 560 meters above sea level. The wine regions are mostly located in temperate climates without extremes, approximately on the 47th and 48th latitude; comparable to the French Burgundy. The soil types are quite varied. In Lower Austria, loess predominates in the Weinviertel and Danube Valley, primary rock in the Kremstal and Wachau, and limestone in the Thermenregion. In Burgenland the soils consist mainly of slate, loam, marl, loess and sand, and in Styria of brown earth and volcanic soils.

In Austria, 26 white wine and 14 red wine varieties are defined as quality wine grape varieties, which may be used for all quality types. The designations Weißer Burgunder, Grauer Burgunder, Blauer Burgunder, Rheinriesling and Blaufränkisch are not permitted for "wine with and without grape variety/vintage" in order to exclude confusion by supposedly indicating areas of origin (Burgundy, Rhine, Franconia). Instead, however, the designations Pinot Blanc, Pinot Gris, Pinot Noir and Riesling are allowed for these wines. Moreover, there are additional grape varieties allowed for these wines.

The largest vineyard area was in 1980 with 59,432 hectares. From then on, the white wine areas were continuously reduced and the red wine areas were expanded. This trend has recently been stopped. Austria is a typical white wine country, special red wine areas are Central and Southern Burgenland, Western Styria and the thermal region. In 2017, vineyards covered a total of 46,515 hectares of planted vineyards (in 2009 it was 45,908). Of this, red wine varieties account for 15,370 hectares = 33% (15,770 ha) and white wine varieties for 31,145 hectares = 67% (30,138 ha). There were no major changes compared to 2009. The Grüner Veltliner, with 6.3% also the largest increase of all varieties, is the undisputed leader with almost one third of the total area and almost half of the white wine varieties. Among the red wine varieties, Zweigelt dominates followed by Blaufränkisch and Blauer Portugieser. The top 5:

The EU wine market regulation in force as of 2009 brought fundamental changes to the quality levels. The new EU-compliant designations PGI (Protected Geographical Indication) and PDO (Protected Origin) were banned in Austria in order not to confuse consumers and the old designations Landwein and Qualitätswein/Prädikatswein were retained. The three levels are (the first two are considered one):

Wine without indication of variety and/or vintage - Wine from Austria:

Wine with indication of variety and/or vintage - Wine from Austria

According to EU law, it is also a quality wine, as there are officially only the three mentioned quality levels. However, traditional designations may continue to be used, which is also used by other countries such as Germany, Italy (DOC and DOCG) and Spain (DO and DOCa). Under Austrian wine law, a Prädikatswein is thus a higher level of quality wine. There are six Prädikat wine types: Spätlese, Auslese, Beerenauslese, Trockenbeerenauslese or Ausbruch, Strohwein and Eiswein. General regulations are:

Outbreak: At least 27 °KMW, exclusively noble rotten, overripe and dried berries. The designation may only be used for the Ruster Ausbruch.

Straw wineSince 2002, the term " reed wine " has also been permitted as an alternative. At least 25 °KMW must weight. Must be produced from fully ripe and sugar-rich berries, which were stored on straw, reed or hung on strings for at least three months before pressing. According to an amendment to the law in 2002, however, the grapes can be pressed after only two months if a must weight of at least 30 °KMW has been reached. If the must degrees are not reached, the wine can (must) be marketed as quality wine.

Ice wine: At least 25 °KMW. The grapes are pressed and crushed when frozen. If the must degree is not reached, the wine can (must) be marketed as quality wine.

Mountain wine: permitted for local wine and quality wine if the grapes come from terraced vineyards or steep vineyards with a slope of more than 26%

Heuriger: Designation for wine, irrespective of the quality level, made exclusively from grapes harvested in Austria and produced in Austria. However, the wine may only be sold to resellers by 31 December of the year following the harvest at the latest and to consumers by 31 March of the following year. However, Heuriger is also the common name for Buschenschank in Austria.

Tempest: Protected designation for a partially fermented grape must. The actual alcoholic strength must be at least 1.0% and may be up to 10% vol.

Organic wineThe production is at least subject to the guidelines of the EU organic regulation, as well as the often even stricter rules of organic associations. The Austrian umbrella organization is Bio Austria (see also under organic viticulture).

The Austrian standard work regarding wine law is "Weingesetz" (Manz-Verlag), which comprises 818 pages in the 5th edition published in 2012. It offers a presentation of the entire wine law including all regulations and EU provisions. Furthermore, there is the electronic database RIS (Legal Information System) with, among others, contributions on wine law (see also Wine Law and EU Regulations).

Must weight: For each quality level there is a minimum must weight (see above).

Yield: For wine without varietal/vintage designation, a maximum of three times the average yield per hectare of a holding; for all other quality levels, a maximum yield per hectare of kilograms of grapes or litres of wine applies. If the maximum quantity is exceeded, the entire harvest of a vintage must be marketed as wine without a grape variety or vintage designation. The yields have to be reported to the BKI (Bundeskellereiinspektion - Federal Winery Inspectorate) by means of a harvest report, which is also checked for compliance.

The maximum quantity per hectare is 9,000 kg of grapes or 6,750 l per hectare of vineyard area registered and planted in the vineyard register for the production of wine, Land-, Qualitäts- or Prädikatswein (1.33 kg of grapes yields 1 l of wine). After conversion of the vineyard register to the content requirements of the integrated administration and control system, this maximum hectare quantity is 10,000 kg of grapes or 7,500 l of wine. Until the changeover (probably in 2018), the Federal Minister of Agriculture, Forestry, Environment and Water Management can reduce or increase the maximum quantity per hectare for the harvest of a year by up to 20% by means of an ordinance at the request of the National Wine Committee, if this is required by the climatic or viticultural conditions for that year. This authorisation was used for the 2016 vintage and the maximum yield was raised from 9,000 to 10,800 kg/ha.

Vintage: An indication is not allowed only for wine without grape variety/vintage. For the other quality levels, the percentage must be at least 85% of the indicated vintage. Sweeteners, dosage do not count towards the 15%. For ice wine harvested in the following year (January or later), the previous year must be indicated.

The blending of grapes, mash, must or wine from red wine and white wine grapes is only permitted for wine without vintage/variety indication. However, these wines may then not be described as red wine or white wine, but only as "wine from Austria".