The wine-growing areas of this large region (French: Sud-Ouest) are among the oldest in France. Geographically and also historically, it includes the entire area between the Massif Central, which forms the eastern border, and the Atlantic coast in the west, as far south as the Pyrenees on the border with Spain. Administratively, it is the former regions of Midi-Pyrénées and Aquitaine, geographically it is the catchment area of the Dordogne, Garonne and Adour rivers. Julius Caesar (100-44 BC) first called the Roman province he conquered between the Garonne River and the Pyrenees the Aquitaine (French Guyenne). Emperor Charlemagne (742-814) annexed it to the Frankish Empire. After an eventful history as an independent county, the addition of Gascony and then under English rule from the middle of the 12th century, the region only finally became part of France in 1453.

In the Middle Ages, the Catholic orders cultivated viticulture here, with the Catholic order of the Cistercians doing particularly well. The Dutch demand for brandy and sweet wines from the 17th century onwards shaped the style of wine. At this time, the name Haut-Pays (Upper Country - upstream from Bordeaux) became common. However, the wines were overshadowed by the Bordelais for a long time. Wine was sold from the port in Bordeaux and all other areas had to wait until all the wine had been shipped from there. Southwest France is also called a "vine museum", because there are many autochthonous grape varieties, some of them ancient, that are increasingly being cultivated again. These are the varieties Arrufiac, Baroque, Duras, Fer, Lauzet, Len de l'El, Mauzac Blanc, Manseng Noir, Négrette and Tannat. These give the wines an independent, typical note. But the classic Bordeaux varieties Cabernet Franc, Cabernet Sauvignon, Merlot, Sauvignon Bl anc and Sémillon are also represented. The biggest common feature of the vast area is the Atlantic climate. There is plenty of humidity in winter and spring, warm summers and long, sunny autumns.

The region groups together the growing areas of south-west France, with the exception of Bordeaux. The vineyards cover a total of 160,000 hectares. That is as much as the two countries Germany and Austria together. The region is divided into five larger sub-areas that produce different styles of wine with their own character. In the centre is the famous brandy region of Armagnac, much older than the better-known Cognac. The north is dominated by the large Bergerac area, south of which is Cahors. To the east lies Gaillac, steeped in history. And in the southwest corner on the edge of the Pyrenees are the two famous areas of Jurançon and Madiran: 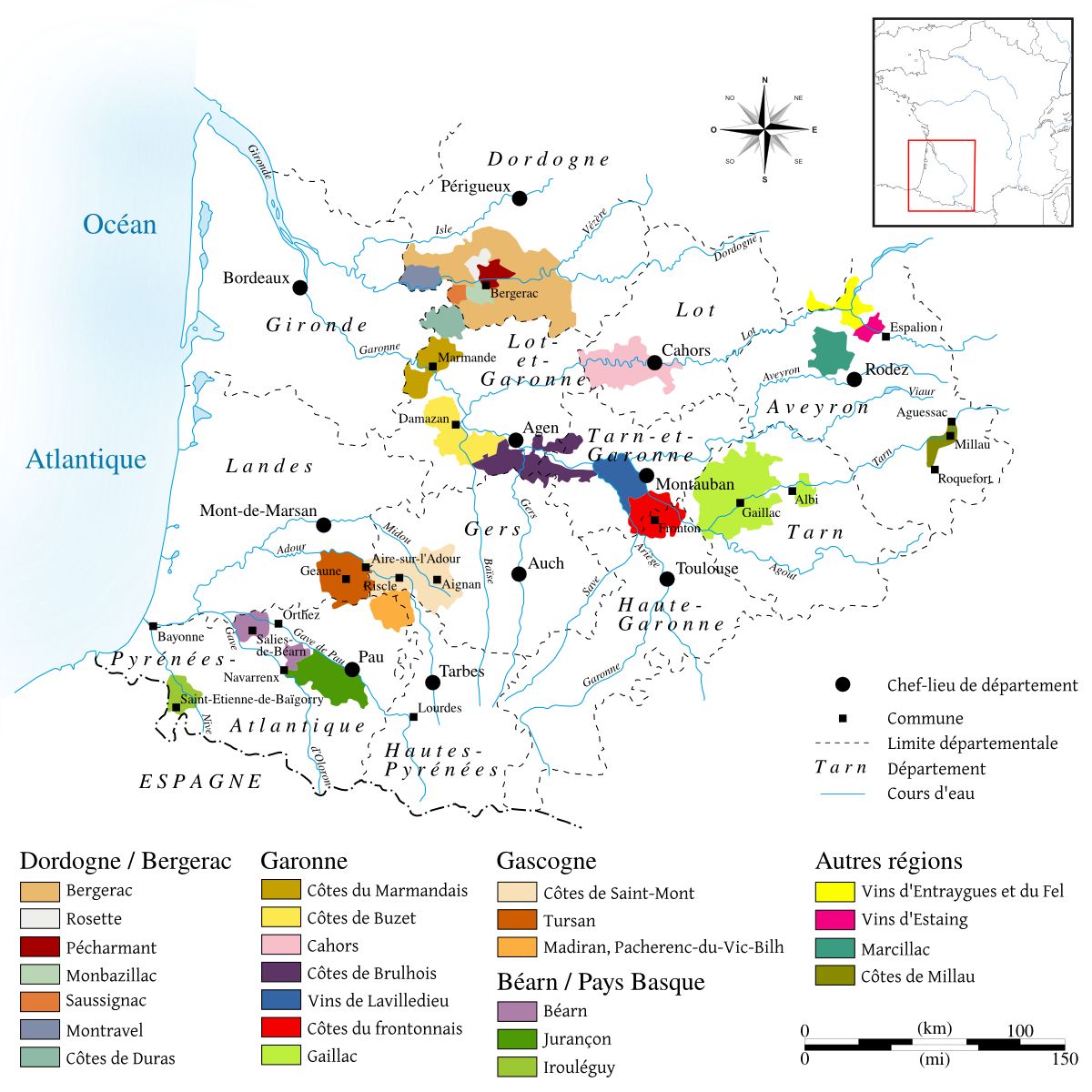 Sources of Purchase for South-west France 36