Unfortunately there is no information about Jurancon AOC available.

The appellation is located in the foothills of the Pyrenees in the southwest of the Southwest France region. It is partly congruent with the Béarn appellation. There was probably already winegrowing here 2,000 years ago at the turn of the millennium, as Roman mosaics from that time suggest. As early as the 14th century, the vineyards in this area were defined as special vineyard sites (crus) by resolution of the Parliament of Navarre. Among other things, it was forbidden at that time to import foreign wines. This can be seen as one of the first attempts at a classification or protected designation of origin. Incidentally, Jurançon was one of the first French areas to be classified as an AOC at the end of the 1930s. It is said that the King of Navarre Anton of Bourbon (1518-1562), at the baptism of his son and later King and great wine lover Henry IV (1553-1610), wetted his lips with it. 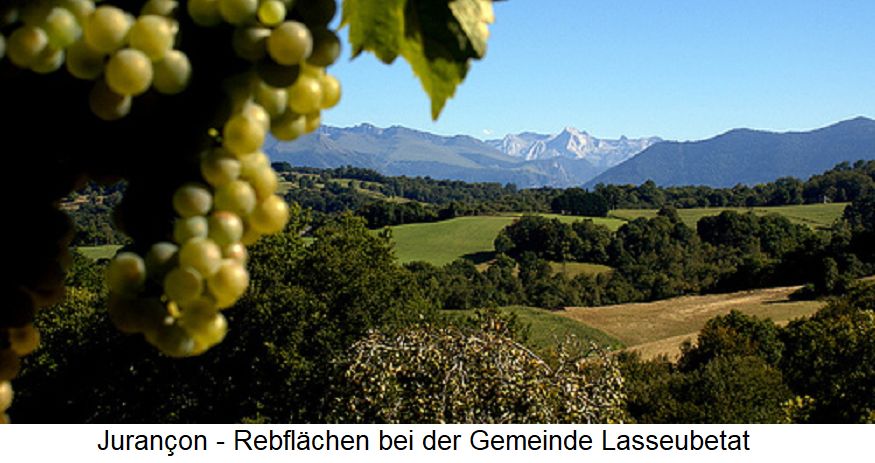 The fact is that the wine from Jurancon established itself as the standard wine for festive ceremonies of the French ruling dynasty. At that time, it was produced in red and white. Phylloxera destroyed most of the vineyards at the end of the 19th century, but afterwards the old varieties were replanted. Jurançon was widely exported to Holland and as far away as America. The famous French writer Sidonie-Gabriele Colette (1873-1954), author of "Chéri" and "Gigi", wrote about it: "As a young girl I made the acquaintance of a prince - warm, imperious and insidious like all great seducers: Jurançon". This, of course, contributed to the fame of the wine.

The vineyards cover about 1,000 hectares on south-facing slopes at 300 to 600 metres above sea level with a relatively cool climate. The vines are raised to a height of two metres in the vine training Espalier, which protects them from the ground frosts. The long, sunny autumns allow a very late harvest into December. The traditional Jurançon version, similar to the sweet Sauternes wines, is a concentrated, sweet white wine made from overripe or dried grapes (see also under Passerillé). The small-berried and thick-skinned grape variety Petit Manseng, which produces extremely low yields (often only 15 hl/ha, 40 hl/ha are permitted), is particularly well suited for this. Only under these conditions can a high-quality sweet Jurançon be produced. Courbu Blanc, Camaralet de Lasseube, Gros Manseng, Lauzet and Petit Courbu are also present in small proportions.

The heavy wine also has a nice, balanced acidity and is very long-lived. Jurançon sec was classified as a separate appellation in 1975. This is a dry variant made from the Gros Manseng and Courbu Blanc varieties. This wine can also be produced in years with poorer weather conditions and accounts for about three quarters of the production. Both wines have a characteristic greenish hue that deepens with age. Well-known producers are Domaine du Bellegarde, Clos Bellevue, Domaine Bordenave, Domaine de Cabarrouy, Domaine de Capdevielle, Domaine Castéra, Domaine Cauhapé, Domaine Gaillot, Clos Guirouilh, Château Jolys, Cru Lamouroux, Clos Lapeyre, Domaine Larredya, Domaine Nigri and Clos Uroulat.