Hungary has a very old viticultural culture, as wines from Sopron and Eger were already a household name in the 13th century. Viticulture in the Carpathian Basin was influenced on the one hand by ancient Central Asian traditions and on the other by Roman wine culture. Despite various wars and unrest, wine has been cultivated here for over 1,000 years. Even the Ottomans, who occupied most of the country for about 160 years, did not suppress viticulture despite the ban on alcohol, and were happy to collect taxes for it, but development was inhibited during this time. According to legend, Emperor Charlemagne (742-814) was so enthusiastic about "Avar wine" that he had some vines brought to Germany.

The Hungarian King Matthias Corvinus (1440-1490), who resided in Wien (Austria) during the last five years of his life, is said to have said that "all the people should have wine and the winegrowers should be highly respected". In the Middle Ages, as in many countries, the Catholic Church played a leading role in the spread of viticulture and wine culture in Hungary. The famous Tokaj is decisively connected with Hungary's wine history. After the phylloxera catastrophe and the two world wars, the focus shifted to the production of mass-produced wines. Since the political upheavals of 1989 and the re-establishment of the winegrowers' association, however, winegrowing has been on a steep upward trend again

Hungary has a variety of soil types, from sand and loess to clay, lime, marl and various volcanic rocks such as basalt, tuff and andesite. The climate is Central European and continental, with hot summers and cold winters. The 223 registered grape varieties (over 60 of them autochthonous) are predominantly white. However, around 2,000 hours of sunshine per year and various microclimates also favour the production of red wines. The Danube, which flows from north to south, divides the country into roughly two large halves 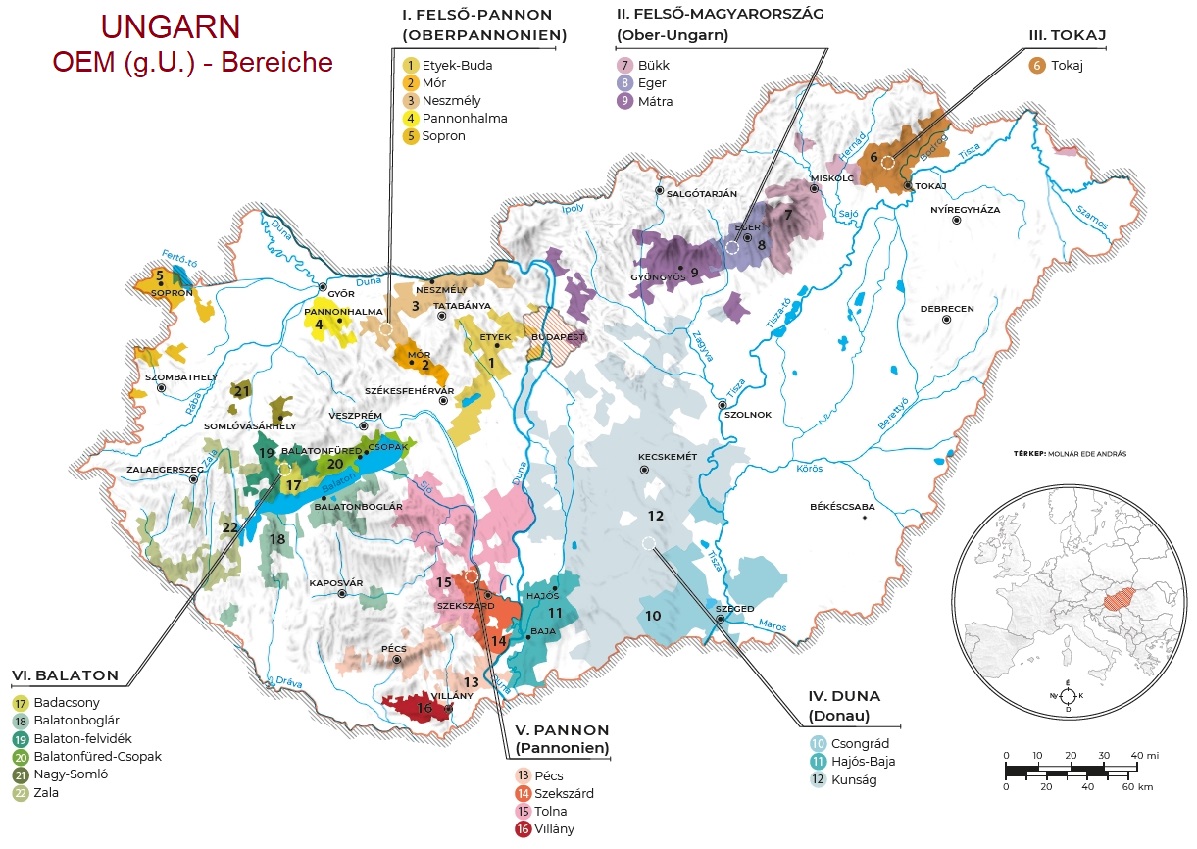 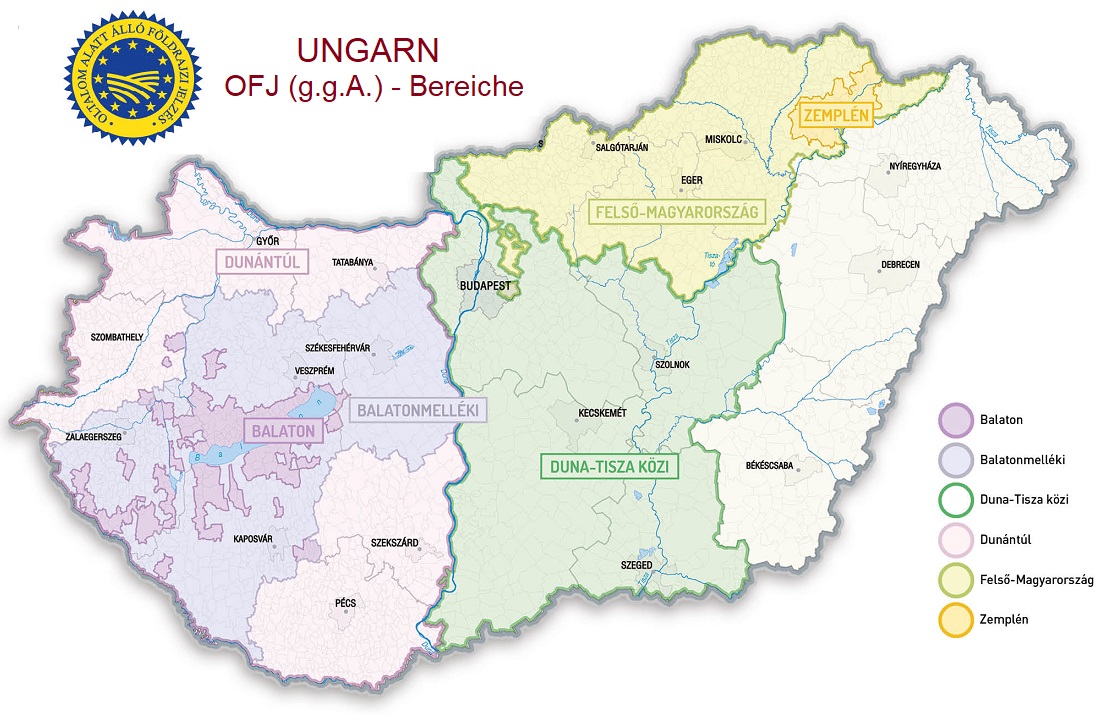 There are 6 country wine areas. Two of them, namely Balaton and Felső-Magyarország, are identical in designation to the 6 wine-growing regions listed above

Hungary is predominantly a white wine country, with just under 70% of production, although the red wine variety Kékfrankos (Blaufränkisch) dominates. In 2020, vineyards covered 58,959 hectares of vines. Compared to 2000 with 87,000 hectares, this was a reduction of one third in 20 years. Between 2.5 and 3 million hectolitres of wine are produced annually (see also under wine production volumes). The grape variety list 2020 (Statistics Ministry of Agriculture Hungary):

In August 2009, the EU wine market regulation became valid for all member countries with fundamental changes to the wine designations and quality levels. The designations are (see also under Quality System):

OFJ = PGI (oltalom alatt álló földrajzi jelzés) - Tájbor or country wine
There are 6 country wine areas, which are marked by a blue-yellow seal on the label; see above.

Wine with protected origin. There are 22 wine regions (which are automatically also OEM or PDO) with a total of 33 quality wine areas identified by an orange-red seal on the label (see above).

OEM DHC (Districtus Hungaricus Controllatus)
This quality level, introduced in 2003, corresponds analogously to the DAC system in Austria. There are three levels: Classicus, Premium and Super Premium. These wines are characterised by a certain style of taste typical of the area. The individual OEM areas are free to decide on the use and also define the specifications. The DHC areas are Izsáki Arany Sárfehér and Villány.

The place name ending in "i" (which corresponds to the German "er" such as "Gumpoldskirchner") is usually followed by the grape variety, for example "Soproni Kékfrankos" (Blaufränkisch from Sopron)

Sources of Purchase for Hungary 10