Autonomous region or historical landscape of Spain with about 30,000 km² in the northwest of the Iberian Peninsula, which extends along the Atlantic coast. In the south, the region borders on Portugal and to the east on the Basque Country, with which Galicia belongs to "green Spain". Separated by high mountains from Castilla y León, an isolated development influenced by Portugal has taken place. Native inhabitants were the Celts (Galician = from Gaul) in the west and the Basques in the east. In the 5th century the Germanic Swebs invaded and in 585 the Visigoths conquered it. After the liberation from the Moorish rule in the 8th century, it first belonged to the kingdom of Asturias, later to León and Castile. At the time of the independent kingdom of Asturias, Santiago de Compostela (end point of the famous pilgrimage route) was the capital.

The mountainous country is cut through by countless rivers with many valleys. For this reason it is also called the "land of 1,000 rivers". These are among others Río Anllóns, Río Arnoia, Río Eo, Río Eume, Río Limoa, Río Miño, Río Sil and Río Tambre. The Atlantic climate is characterized by mild winters and moderately warm summers with high rainfall. The area is one of the wettest in Spain. This, together with the many sunny days, makes it ideal for wine growing.

The winegrowing tradition dates back to the Romans. The white wine variety Albariño(Alvarinho), which predominates here, is said to have been introduced as early as the 12th century by the Cistercian monks of the monastery of Armenteira. In the 14th century wine was exported to many European countries. In the 19th century Galicia was severely affected by the phylloxera catastrophe. World wars and an economic crisis had a negative impact on the wine industry, which only slowly recovered after accession to the EU in 1986. 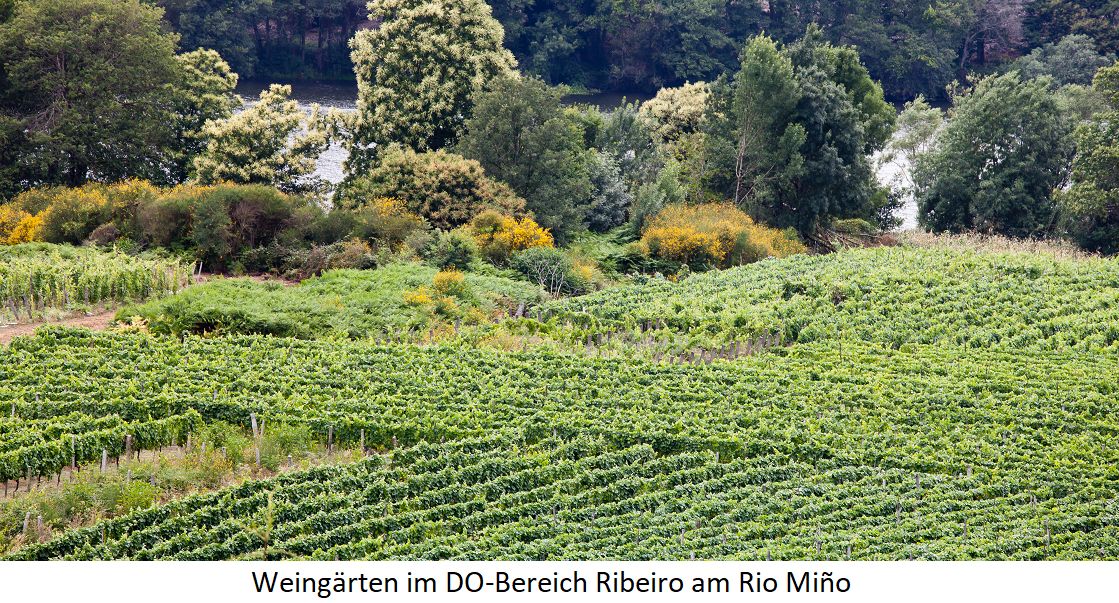 The vineyards cover about 10,000 hectares of vineyards on mineral-rich slate and granite soils. They are located mainly in the south at the Portuguese border, preferably near the many rivers. Significant for the region are the extremely high yields. The white wine varieties occupy two thirds of the vineyard area, the most important ones are Albariño(Alvarinho), Godello, Loureira(Loureiro), Treixadura(Trajadura) and Palomino. The main red wine varieties are Mencía, Garnacha Tinta, Tintorera(Alicante Henri Bouschet) and Bastardo(Graciano). The DO areas (quality wines) are Monterrei, Rías Baixas, Ribeira Sacra, Ribeiro and Valdeorras. The IGP areas (country wines) are Betanzos, Ribeiras do Morazzo and Valle de Mino-Ourense.