DO area for red wines and white wines in the north-west of the Spanish province of Ourense in(Galicia) near the Portuguese border The name means "shore land". To the north is Santiago de Compostela, one of the most famous Christian places of pilgrimage, where the grave of the apostle James is said to be located. From several starting points in Europe, the place is the final destination of several pilgrimage routes; at the time of the wedding in the Middle Ages there were up to two million pilgrims annually. Already in the 16th century, wines were exported from here to Italy and England under the name Ribadavia (the main town of the area). These were mainly tostadillos (sweet wines). The technique of sulphurisation was already used at that time. 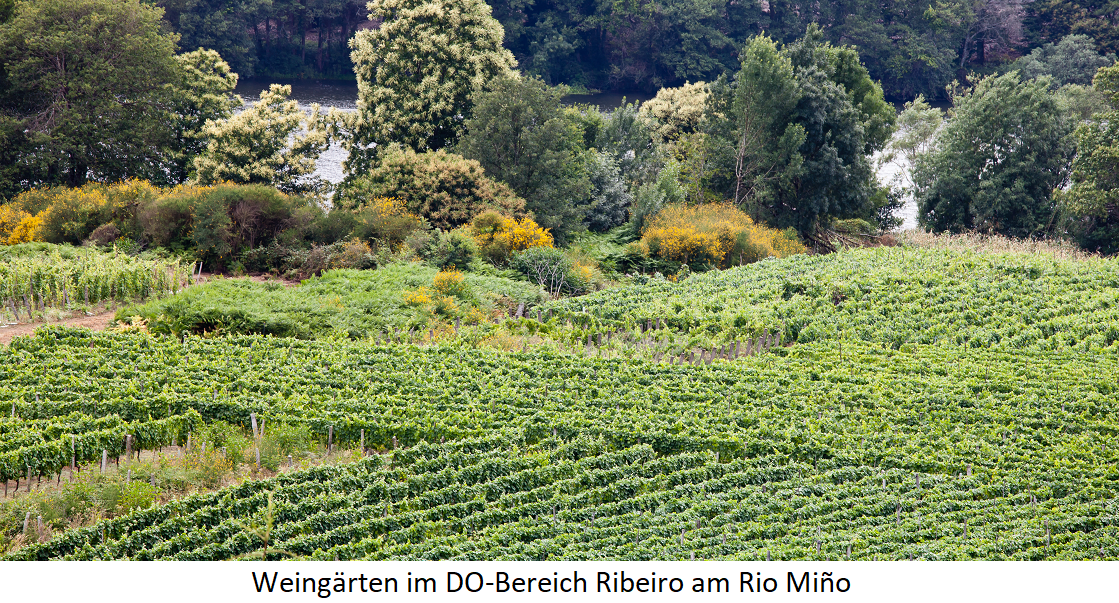 The area, which extends over 13 municipalities, is divided into the Ribeiro de Avia, Ribeiro del Miño and Ribeiro de Arnoia subzones. The Atlantic influenced climate results in warm summers and cold winters. There is sufficient rainfall with an average of 950 mm per year. The vineyards cover 3,000 hectares of vines on humid brown earth soil on slopes between 75 and 400 metres above sea level. They are located in the valley of the river Miño and on the banks of its tributaries, the Arnia and Arnoia. 90% of the white wines produced are from the main varieties Treixadura(Trajadura) and Torrontés(Alarije), as well as Albariño(Alvarinho), Albilla(Albillo de Albacete), Godello, Loureira(Loureiro), Macabeo and Palomino. The main red wine varieties are Sousón(Vinhão), Brancellao(Alvarelhão), Caiño Tinto(Borraçal), Ferrón(Manseng Noir), Mencía, Garnacha Tinta and Tempranillo.