The northern part of the Languedoc-Roussillon area in the deep south of France on the Mediterranean coast. It includes, from north to southwest, the three départements of Gard, Hérault and Aude. The much smaller Roussillon in the département of Pyrénées-Orientales connects to the west, and the wine-growing regions of Provence and Rhône to the east. The name derives from "langue d'oc", which means "language of the Oc" (oc = yes). This Occitan language was spoken south of the Loire in the Middle Ages; to the north, "langue d'oil" was spoken ("oil" developed into "oui"). The regions of Languedoc-Roussillon and Midi-Pyrénées were merged in 2016 to form the new political region of Occitanie. Long before the much more famous Champagne, a sparkling wine was produced here, today's Blanquette de Limoux. A special form of a high-alcohol, sweet vin de liqueur in the Languedoc is the Cartagène. Until the 1980s, the Languedoc had the reputation of being a wine-growing region that mainly produced cheap mass wine. From the beginning of the 1990s, there were EU-sponsored grubbing-up programmes. This led to an extremely strong reduction of the vineyards within ten years.

The vineyards cover a total of over 200,000 hectares of vines. They extend over 200 kilometres along mostly near the coastline of the Mediterranean from Nimes with the appellation Costières de Nîmes, which belongs to the Rhône region in terms of wine law, in the east to Narbonne with Limoux and Corbières in the west. Most of it lies on low-lying alluvial soil, and this is also where most of the clearing took place. The vineyards in the foothills of the Pyrenees in the west, which are a few hundred metres high, lie on slopes of slate and limestone. As in the Roussillon area, the climate is Mediterranean with dry and hot summers. The division of the vineyards according to quality levels:

A new classification for the region's wines was drawn up by the CIVL (Comité Interprofessionnel des Vins du Languedoc), which came into force in 2011. The pyramid-shaped hierarchy in ascending order is Languedoc, Grands Vins du Languedoc and Crus du Languedoc. The basis for the classification is qualitative and economic criteria (among other things, certain distribution channels and minimum sales prices are prescribed). A wine has to fulfil certain characteristics and pass a test above the simple AOC Languedoc in order to be classified in the higher category 2 or 3. This is intended to strengthen the small appellations in their emphasis on terroir.

The second tier, Grands Vins du Languedoc, accounts for about 70% of wine production. This includes (except of course AOC Languedoc) most of the appellations listed below. These are structured, aromatic growths typical of their terroir. The regulations regarding blends of grape varieties are individual and stated there in each case. The maximum permitted yield is 48 to 50 hl/ha.

At the top of the pyramid are the Crus du Languedoc with about 10% of the wine production. According to the specifications, these wines, which are as expressive as possible, have "rarity value and bear the signature of the producer". White wines must be aged for at least six months, red wines for at least twelve months. A sensory test is mandatory. At least 70% of the production must be sold directly from the winery. Maximum yields are 45 hl/ha for red wines and 50 hl/ha for white wines.

The AOC areas or appellations (quality wines) and IGP areas (country wines) of the Languedoc region are: 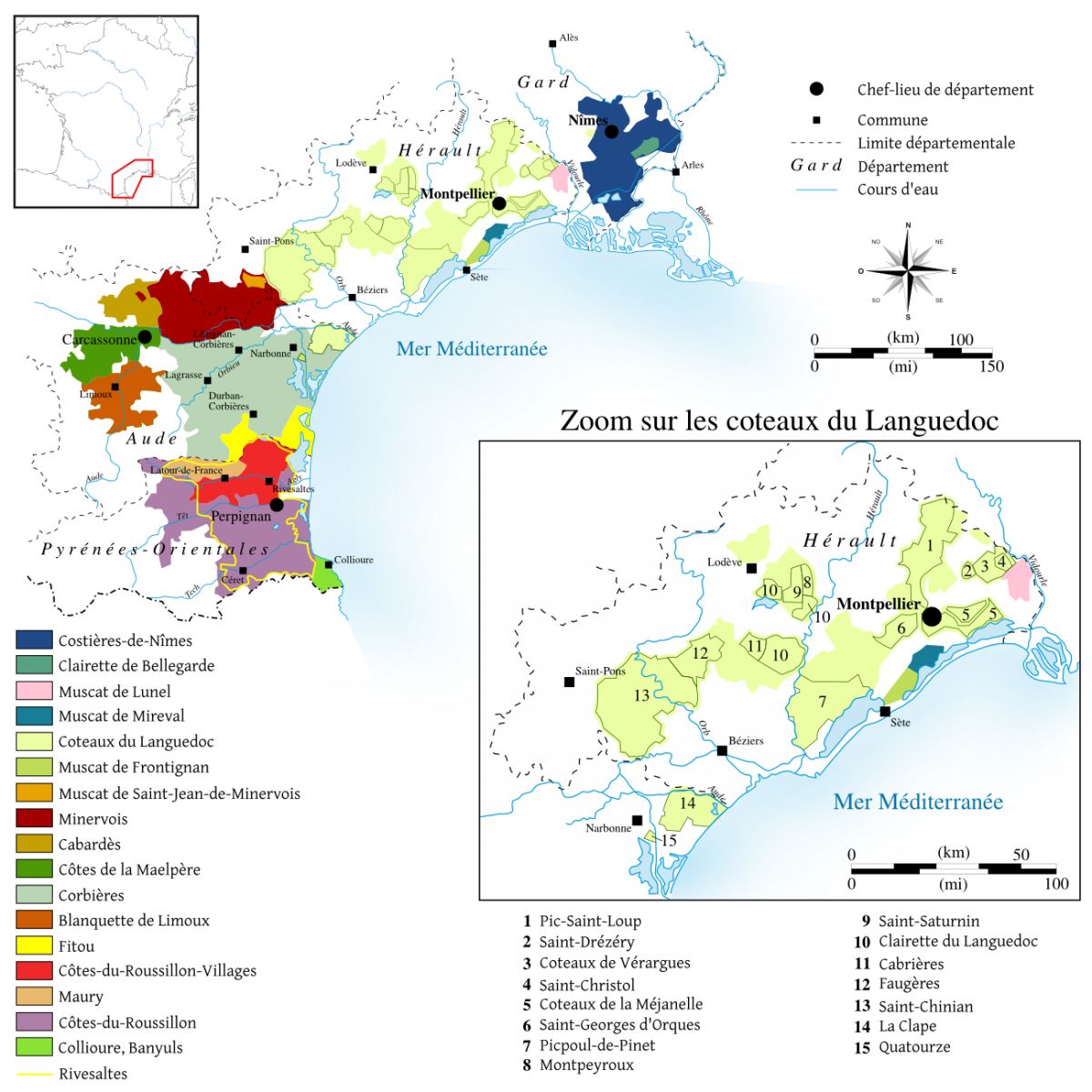 Sources of Purchase for Languedoc 60