The wine-growing region is located in Rhineland-Palatinate and to a small extent also in Saarland in Germany. The Moselle River winds its way from Trier to Koblenz over 237 km, but as the crow flies it is only 96 km. The vineyards cover 8,798 hectares of vines, stretching along the Moselle from its headwaters in the Vosges Mountains on the border of Luxembourg to its confluence with the Rhine near Koblenz, as well as along its two tributaries, the Saar and the Ruwer. These three rivers gave the wine-growing region the old name Mosel-Saar-Ruwer, which was valid until 2007. Germany's oldest vineyards are located on the upper Moselle; the Romans were already cultivating vines here in the 1st century BC and founded the city of Augusta Treverorum, today's Trier, in 15 BC. Remains of old Roman presses can still be seen in Piesport and Erden. The Neumagen wine ship also points to Roman wine culture. The two Roman poets Ausonius (310-395) and Venantius Fortunatus (530-610) described the beauty of the landscape during boat trips on the Moselle. In the Middle Ages, the Benedictine order owned many vineyards along the banks of the three rivers, to which many individual vineyard names testify 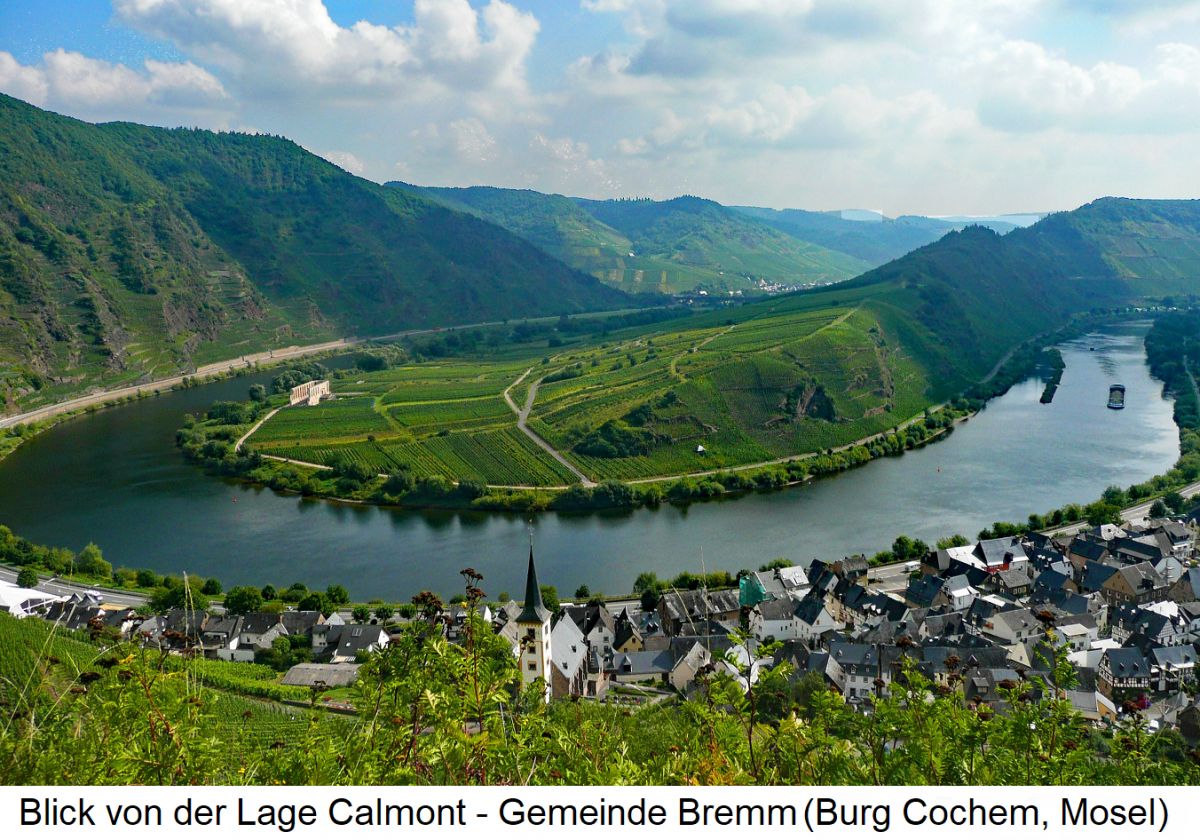 After the occupation of this area in 1807, Emperor Napoleon (1769-1821) enacted a law whose negative after-effects can still be felt today. In order to prevent large-scale land ownership, he ordered "real division", by which land ownership was to be divided equally among all descendants in the event of inheritance. The result was a fragmentation into innumerable, often extremely small, land units. At the Congress of Vienna in 1815, the former territory of the Electorate of Trier was annexed to the Prussian state. As a result, the royal government took various measures to improve the economic situation of Moselle winegrowers. These included the Prussian site classification, the founding of the winegrowers' association and the establishment of three winegrowing domains on the Moselle and Saar, which ushered in a golden age of Moselle winegrowing. This continued the tradition of the great wine lover King Frederick the Great (1712-1786), who as early as 1769 had a vineyard planted on the southern slope of the Klausberg in Sanssouci Park in Potsdam.

The growing region is one of the warmer climatic zones in Germany. The Moselle, like all bodies of water, exerts a positive effect or creates the conditions for this through the formation of valley slopes. Viticulture benefits from the ideal combination of steep, sun-drenched slopes, the sun-reflecting slate soils and optimal rainfall. In some steep slopes, cultivation is only possible using special equipment and monorack tracks. Calmont is one of the steepest vineyards in the world, with a slope of up to 68°. Due to the heat storage, frosts are largely prevented. There are only slight temperature fluctuations. As a rule, there are pleasantly warm summers and only moderately cold winters. The soils on the upper course of the Moselle consist of shell limestone and Keuper, and on the middle and lower course of the Moselle and in the valleys of the Saar and Ruwer of Devonian and clay slate. The dark clay slate occurs in about half of the vineyards.

The slate rock stores the sun's heat during the day and releases it again at night, which ensures a mild climate. The vines are usually rooted metres deep in the soil or rock. Many small winegrowers work the often terraced steep slopes in painstaking manual labour and deliver their grapes to large wineries. Mosel is divided into six areas with 19 large vineyards and 524 individual vineyards. The 242-kilometre-long Moselle Wine Route begins directly behind the German-French border in Perl, runs along the river and crosses it several times. Along the way, it touches many famous wine-growing communities and finally ends in Koblenz. 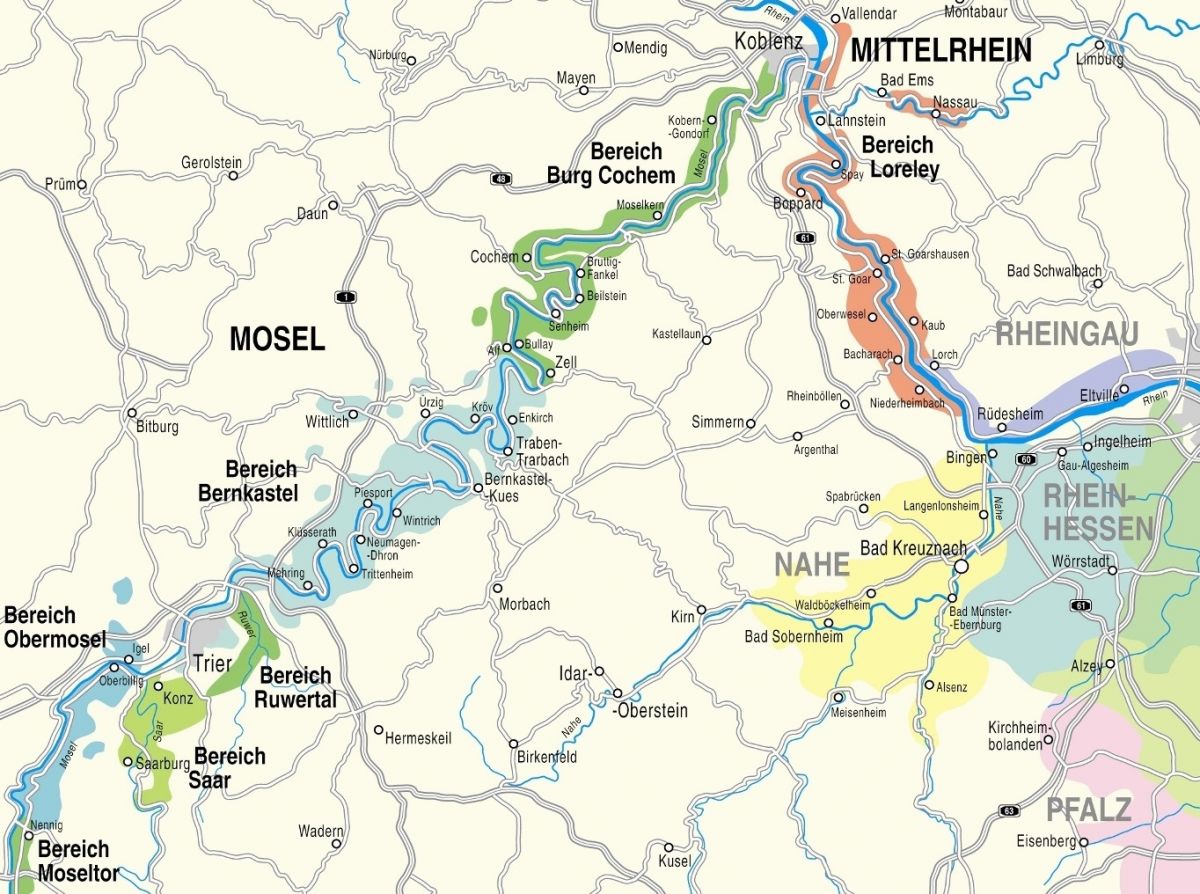 The German wine law allows the area name to be used without the addition of "area" on the label, provided there are no place names or single vineyard designations with which confusion could arise. The winegrowers from the "Saar" had already practised this from the time of the name change, but this was not possible for those on the "Ruwer". In 2019, vineyards with the name part "Ruwer" in the district of Trier-Ruwer, which are no longer cultivated, were deleted from the list of vineyards, thus enabling them to be listed on the label

The area Bernkastel or Middle Mos elle (formerly Lower Moselle) forms the heart with the most vineyards. It stretches from Briedel in the north upstream to the Moselle metropolis of Trier in the south in a length of about 50 kilometres. The Moselle flows through the area in ten relatively narrow loops. The large area covers almost 6,000 hectares of vineyards and is divided into ten major vineyards: Badstube, Kurfürstlay, Michelsberg, Münzlay, Nacktarsch, Schwarzlay, St. Michael, Probstberg, Römerlay and Vom heißen Stein. The most famous Moselle communities and vineyards are located here. One of the most famous single vineyard sites in the area and also in Germany is Bernkasteler Doctor. It belongs to the renowned Großlage Badstube with (unusually) only first-class sites. For the most part, the deep soils consist of dark blue weathered Devonian slate, often with a high stone content; in the municipality of Ürzig there is also Rotliegendes (red sandstone). The best-known wine-growing communities with their individual vineyards:

The Burg Cochem (formerly Zell) area is also called the Terrassenmosel, after the many terraced slopes. It stretches along the lower Moselle from Koblenz to Zell and is divided into five large vineyards: Goldbäumchen, Grafschaft, Rosenhang, Schwarze Katz and Weinhex. The landscape is characterised by many medieval castles. The vineyards cover around 1,500 hectares of vines. Some of the slopes are extremely steep, so that the vines can only grow on narrow terraces secured by walls. Among the most famous is the already mentioned Calmont, which also has a special microclimate. The soils consist of clay and silty slate, often interspersed with limestone, quartzite or sandstone. Well-known wine-growing communities with their single vineyards:

The Upper Mos elle region is sometimes also referred to as the Southern Moselle. It comprises around 670 hectares of vineyards south of Trier on the border with Luxembourg and is divided into two large vineyards, Gipfel and Königsberg. The only rarely steep vineyards in wide valleys stretch from Perl to Wasserliesch. The predominant soils are not slate, but shell limestone, Keuper and marl. This is why the area is often compared to the Champagne region. A speciality is the ancient grape variety Elbling, from which sparkling wines are made. Well-known wine-growing communities with their individual vineyards are:

The small Moseltor area on the upper Moselle was defined as a separate area because it is located in the federal state of Saarland. It comprises around 110 hectares of vineyards in the municipality of Perl with the single vineyards Hasenberg and St. Quiriniusberg (Großlage Schloss Bübinger).

The Ruwer Valley area, which is free of large vineyards, was separated from the Saar area in 1998. The steep vineyards with only 200 hectares extend largely on both sides of the Moselle tributary between Riveris and Trier-Ruwer. The preferred sites are in side valleys of the Ruwer. Viticulture was already practised here in pre-Roman times, which is why the area is claimed to be the oldest German wine-growing region. The shallow to medium-textured soils are characterised by weathered, mostly blue or grey Devonian slate and have a high proportion of fine soil. At around 90%, the proportion of Riesling here is the highest in the growing region. The average temperatures are somewhat lower than on the Moselle, so the wines are more acidic, as on the Saar. The wine-growing communities with their individual vineyards are:

The Saar area, named after the river, is divided into the Großlage Scharzberg with 22 individual vineyards. The name of the Großlage refers to the most famous single vineyard Scharzhofberg. The area comprises around 730 hectares of vineyards, and around the same amount is currently not cultivated. It stretches from Filzen at the mouth of the Moselle Saar upstream to Serrig, as well as in the "Konzer Tälchen", a side valley of the Saar branching off from Konz. The soils are largely dominated by grey-blue Hunsrück slate of varying degrees of weathering and are interspersed with clayey brown earth. The vineyards are around 50 to 100 metres higher and the average temperatures are somewhat lower than on the Moselle. The resulting delayed ripening of the grapes is one of the reasons why the Riesling wines here are somewhat more acidic. The wine-growing communities with their individual vineyards are:

There were no serious changes compared to 2009. The share of white wine grapes is the highest among all 13 growing regions at over 90% (followed by the Rheingau with 85%). Riesling clearly dominates with almost two-thirds of the total area. The climbers were Pinot Blanc, Pinot Gris, Chardonnay and Sauvignon Blanc. The 2018 status (0 = smaller than 0.5 hectares):

Sources of Purchase for Mosel 69

In this section you will find
currently 150,931 Wines and 23,432 Producers, including 2,232 classified producers.
Rating system Their sources in Wine Guide Tasting samples