The wine-growing region lies in the north-east of France on the border with Germany formed by the Rhine. The departments of Bas-Rhin and Haut-Rhin formed a separate French administrative region of Alsace (Région Alsace) in 1973 until 2015. As part of the regional mergers, the Grand Est (Great East) region with its capital in Strasbourg was created from 2016, comprising Alsace, Lorraine and Champagne-Ardenne. Viticulture was already practised by the Celts (Gauls) before the Romans who appeared here in the 2nd century. After a decline in the 5th century due to the invasion of the Germanic tribes, it blossomed again under the influence of the Roman Catholic monastic orders. In the 9th century, around 160 wine-growing villages are already documented. In the 16th century, viticulture reached its greatest expansion, with vineyards more than twice as large as today. At that time, there was already a kind of appellation system and Alsatian wines were exported to all European countries. The Riquewihr winegrowers' association at the time specified the harvest date as "as late and ripe as possible" and the permitted "noble" grape varieties. The Elbling variety had to be uprooted. Alsatian was considered the best German wine at the time, often fortified with alcohol and flavoured with spices. 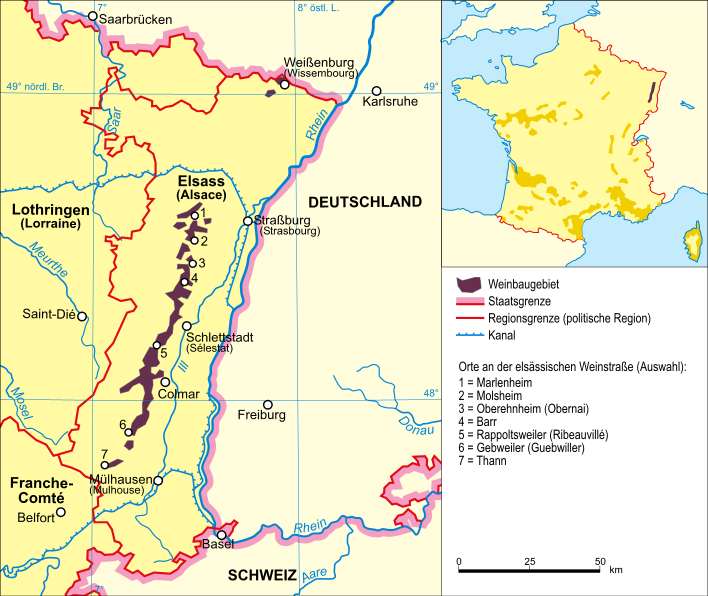 The devastation of the Thirty Years' War (1618-1648) destroyed most of the land. Slowly there was an upswing again and by the middle of the 19th century the area under vines had grown to 30,000 hectares. Then phylloxera and mildew struck here too. The area shrank to less than 10,000 hectares by 1950. For about seven centuries, Alsace was German territory; in 1860 it became part of France, then from 1870 to 1918 it was part of the German Empire again, and after that (with a brief interruption during the Second World War) it belonged to France again. From 1871 to 1918 there was the Reichsland Alsace-Lorraine. Due to this historical development, Alsace's wine culture is German in terms of grape varieties and production and differs greatly from the other French wine-growing regions.

The vineyards cover 15,000 hectares of vines, which stretch along the foothills of the Vosges Mountains in a narrow band, often only two kilometres wide, from Strasbourg in the north 110 kilometres along the German border to Mulhouse in the south. The entire eastern border with Germany is formed by the Rhine. The Vosges Mountains on the western side strongly influence the climate. The mountain range with the 1,424-metre-high Großer Belchen as its summit keeps out most of the precipitation coming from the Atlantic, for this reason Alsace is one of the areas with the least rainfall in France. There are cold winters, a mild spring and warm, dry summers with periods of drought occurring in some years. A special feature is the many different soil types with sand, gravel, loess, lime, clay, slate, granite and volcanic rock.

Alsace is divided into the southern department of Haut-Rhin (Upper Rhine) and the northern department of Bas-Rhin (Lower Rhine). In the past, Haut-Rhin had the somewhat milder climate compared to northern Bas-Rhin, but there are changes due to climate change. Due to global warming, the freshest and fruitiest wines now increasingly come from the centre and Bas-Rhin. The best terroirs lie along the hills from north to south, the most productive areas in the plains. The wine-growing centre is a few villages north and south of Colmar, with the famous Riquewihr. This wine village is now completely listed. The 170-kilometre "Route du Vin" wine route from Marlenheim in the north to Thann in the south touches many of the wine-growing communities in the scenic area.

The "seven vines of Alsace" are the white wine varieties Gewurztraminer, Muscat (the two varieties Muscat Blanc and Muscat Ottonel are often used together), Pinot Bl anc (likewise - Pinot Blanc and Auxerrois), Pinot Gris (formerly Tokay Pinot Gris - but now prohibited by EU decision), Riesling and Sylvaner, as well as Pinot Noir as the only red wine variety. Of the other varieties, Chasselas should be mentioned, but it has shrunk in area and produces rather simple wines. Chardonnay is only permitted for Crémants (sparkling wines). The two traditional varieties, Goldriesling and Knipperlé (Ortlieber), are no longer important. White wines are produced to more than 90%. Red wine is mainly made from Pinot Noir and is sometimes also produced as white Blanc de noirs. The type of vinification (dry to sweet) is not indicated on the label.

There are three appellation designations. The AOC Alsace accounts for almost 75% of the production. Most of these are varietal wines made from 100% of one of the varieties indicated on the label. If this is missing, the wine is a cuvée of different varieties, which are marketed as Edelzwicker (also Gentil). Klevener de Heiligenstein from the municipality of Heiligenstein has a special status. The AOC Crémant d'Alsace for bottle-fermented sparkling wines accounts for over 20% of production. The AOC Alsace Grand Cru applies to the 51 Grands Crus. Sweet wines have had a very strong tradition in Alsace for centuries. The appellations "Alsace Vendange Tardive" (late harvest) and "Alsace Sélection de Grains Nobles" (noble rot berries) are added to Alsace or Alsace Grand Cru. Vin de paille(straw wine) and vin de glace (ice wine) are also produced. Alsace wines, apart from crémant, are bottled in the slender flûtes (flutes).