Unfortunately there is no information about Alsace Grand Cru AOC available.

Highest appellation in the French wine-growing region of Alsace, which is one class above the normal AOC Alsace. The designation is "Alsace Grand Cru" followed by an indication of the site on the label. Although it was enacted as early as 1975, the first list of then 25 sites was not published until 1983. In 1992, a new regulation came into force, at that time 50 sites in 47 communes were classified. The size varies considerably, ranging from 3.2 at the Kanzlerberg to 80 hectares at the Schlossberg. An important prerequisite for the classification was, or is, above all the geological uniformity within a site. Since this does not apply to Kaefferkopf, probably the most famous vineyard in Alsace, it was only taken into account from the 2007 vintage onwards after decades of discussion.

Another prerequisite is wines made exclusively from the grape varieties Gewürztraminer, Muscat d'Alsace (Muscat Blanc), Pinot Gris (formerly Tokay Pinot Gris), Riesling and, as an exception, Sylvaner. With two exceptions, the wines must be vinified as single varietals. In the Altenberg de Bergheim and Kaefferkopf sites, cuvées have also been permitted since the 2007 vintage. As a further exception, the Sylvaner variety has also been permitted in the Zotzenberg site since the 2005 vintage.

The plots must (since the 2001 vintage) be planted with a minimum density of 4,500 vines per hectare. The basic maximum yield is 55 hl/ha, which can be increased annually by 20% to a maximum of 66 hl/ha, depending on the weather. Mechanical harvesting is prohibited, it must be done by hand. Depending on the grape variety and site, the wines must have a minimum alcohol content of between 11 and 14% vol. The wines can also be vinified as "Vendange Tardive" (late harvest) or "Sélection de Grains Nobles" (from noble rotten grapes). The vineyards of all Grands Crus cover a total of around 1,700 hectares of vines; the production volume is only 4% of Alsace. The best-known producers are listed with the Grands Crus, including Boxler Albert, Dirler-Cadé, Hugel et Fils, Kuentz-Bas, Domaines Schlumberger and Trimbach. Alsace is divided administratively into two départements. These are the southern Haut-Rhin (Upper Rhine), considered a better wine region, and the northern Bas-Rhin (Lower Rhine). The 51 Grands Crus are: 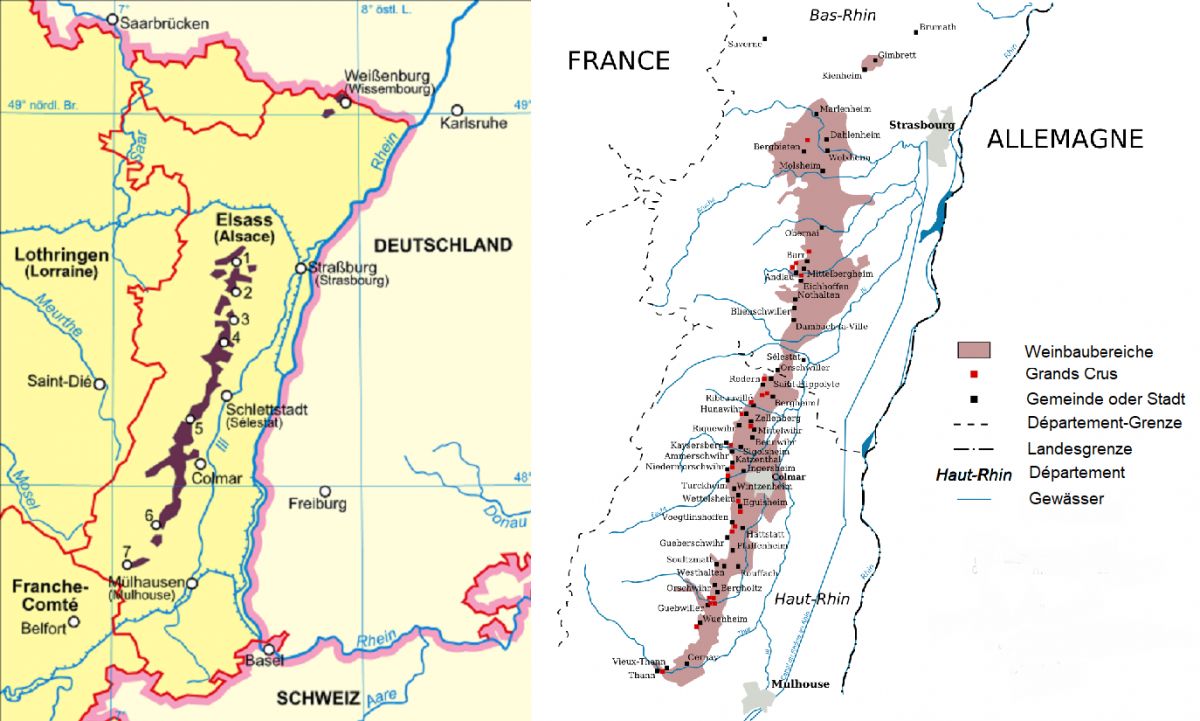 In this section you will find
currently 157,961 Wines and 24,582 Producers, including 2,664 classified producers.
Rating system Find+Buy Tasting samples Editorial schedule