Unfortunately there is no information about Prosecco DOCG available.

DOC area for still, sparkling and semi-sparkling wines in the two Italian regions of Veneto (in the provinces of Belluno, Padova, Treviso, Venice and Vicenza) and Friuli Venezia Giulia (in the provinces of Gorizia, Pordenone, Trieste and Udine). Prosecco was designated a UNESCO World Heritage Site in 2019 in the "Cultural Landscape" category. The vast area covers over 24,000 hectares of vineyards. Antonio Carpenè (1838-1902) is considered the founder of Prosecco sparkling wine in the 19th century. The former IGT area was highly qualified in 2009. At the same time, the former DOC area Conegliano-Valdobbiadene was upgraded to the DOCG area Conegliano-Valdobbiadene Prosecco. The previously used grape variety name Prosecco is now protected by EU law exclusively as a designation of origin and no longer as a variety name. The grape variety Prosecco (Prosecco Tondo) is now called Glera, the grape variety Prosecco Lungo is now called Glera Lunga. 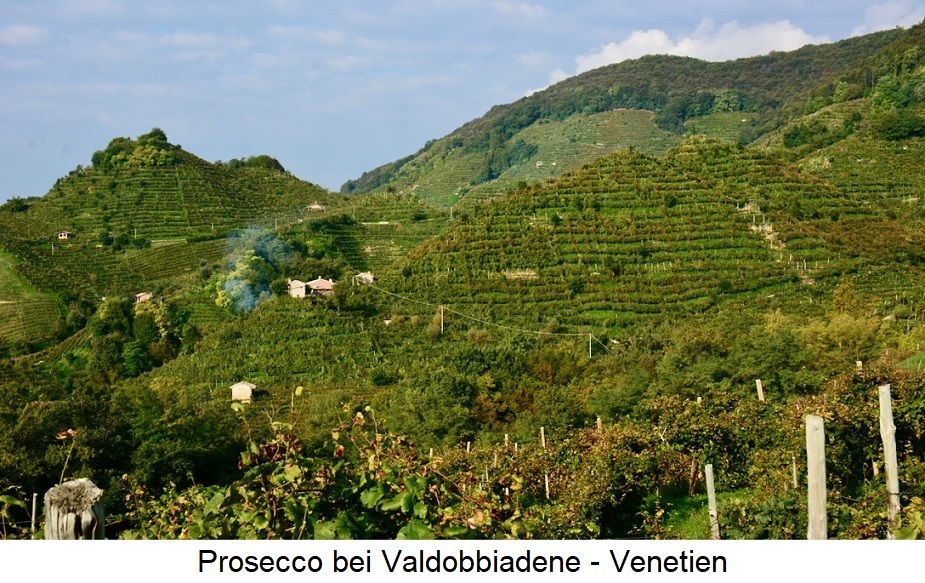 Prosecco = sparkling wine - this is often wrongly assumed. But still wine is also made from it. The part of the name "secco" also has nothing to do with the Italian term for "dry". The far-reaching change decided by the Ministry of Agriculture in 2009 was aimed at restoring the tattered image of the numerous Frizzante and Spumante marketed as Prosecco. It put an end to the years-long glut of discount Prosecco bottled in Germany at dumping prices. It also eliminated the confusion that non-prosecco products from other parts of Italy were also being marketed as prosecco.

The Bianco (still wine), the Frizzante (sparkling wine) and the Spumante (sparkling wine ) are made from at least 85% Glera (formerly Prosecco), and a maximum of 15% in any use of the varieties Bianchetta Trevigiana, Chardonnay, Glera Lunga (formerly Prosecco Lunga), Perera, Pinot Bianco (Pinot Blanc), Pinot Grigio (Pinot Gris), Verdiso and/or white Pinot Nero (Pinot Noir). The Spumante Rosé is produced from 85 to 90% Glera and from 10 to 15% Pinot Nero vinified as red wine. Spumante is produced in brut, extra dry, dry and demi-sec. Spumante produced using the Metodo classico must bear the words "rifermentazione in bottiglia"(bottle fermentation) on the label.

In the case of grape origin, processing and bottling in the province of Treviso, "Provincia di Treviso" or "Treviso" may be indicated on the label. Bottling is now only allowed in white or green glass bottles, the marketing in cans, which used to be common for supermarkets, is prohibited (within the EU this would also be possible for quality wines since 2009). The sparkling wines, which are mostly produced according to the Méthode charmat (tank fermentation), are the second most produced sparkling wines in Italy after Asti Spumante in Piedmont, with around 30 million bottles annually. 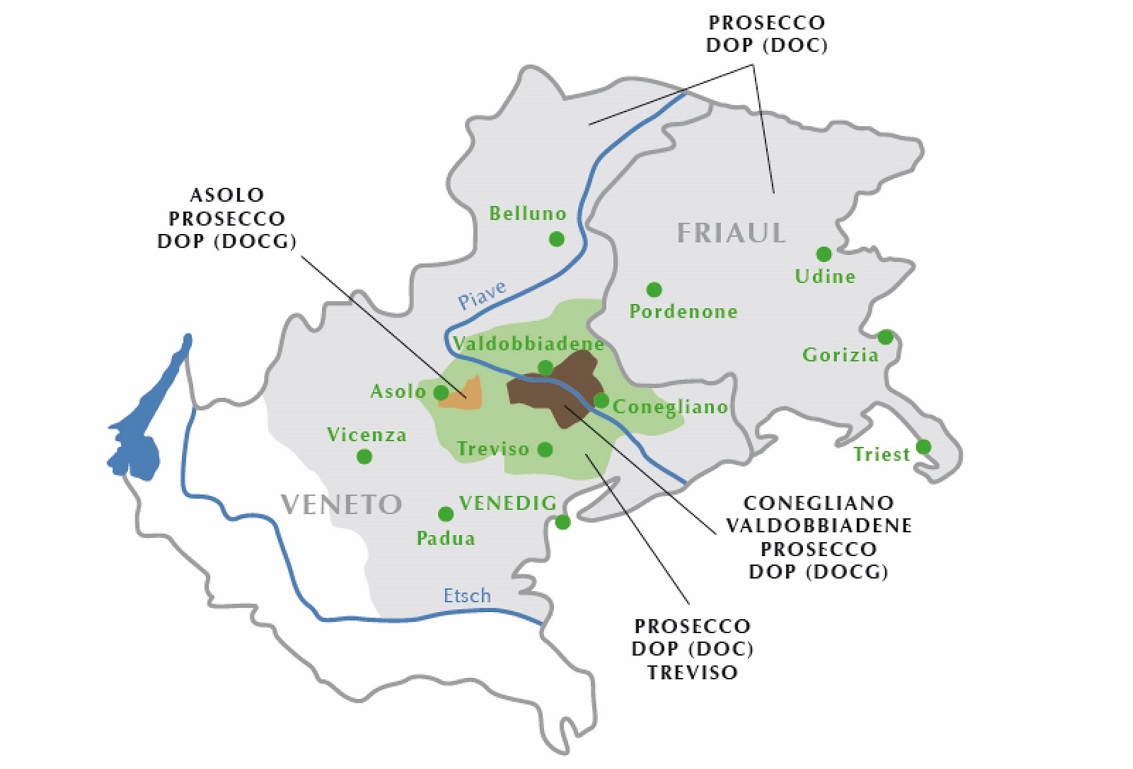 In this section you will find
currently 147,322 Wines and 23,239 Producers, including 2,206 classified producers.
Rating system Their sources in Wine Guide Tasting samples