Unfortunately there is no information about Chablis AOC available.

The appellation, named after the town of the same name and classified in 1938, is located to the north and delimited from the Burgundy wine region in what is known as Basse-Bourgogne in the Yonne department. To the southwest of it lies the Saint-Bris area, which was included before the appellation regulation. Chablis is separated from the Côte d'Or by the Morvan mountains and is much closer to Champagne than the other Burgundian areas. The Romans were already cultivating vines here in the 2nd century and later the monastic orders of the church took over the cultivation. The Cistercian Abbey of Pont igny, whose monks are said to have introduced the Chardonnay here, earned particular merit. At one time, this was the largest wine-growing area in France, with 40,000 hectares surrounding the town of Auxerre. Sales difficulties and damage caused by phylloxera led to a switch to other agricultural products.

In addition, the area was and is extremely vulnerable to hail and frost until May, which is why entire harvests were destroyed time and again. All this contributed to the fact that by the mid-1950s only 500 hectares were under cultivation. From the beginning of the 1960s, attempts were made to successfully combat the danger of frost with various measures. Very effective is the installation of oil-fired ovens in the vine rows, the heat of which is distributed in the vineyard with windmills. In addition, the vines are sprayed with water, whereupon the resulting ice film forms a protective cover around the young shoots. Today, there are again around 4,500 hectares of vines in Chablis and another 19 communes.

The pale yellow wine with a greenish sheen is made from the pure Chardonnay grape variety (here called Beaunoise) and is vinified dry. It has a typical mineral aroma of flint (French: "goût de pierre à fusil") and tastes mild and fruity despite its strong acidity, which is due to the predominant clay and limestone soil. Traditionally, the wine is matured in concrete cisterns or in stainless steel tanks with subsequent transfer to traditional large oak barrels, but there are also many producers who prefer ageing in barriques. Most wines today undergo malolactic fermentation. A top Chablis wine has enormous ageing potential of up to several decades.

The quality hierarchy corresponds to the four-level system of Burgundy classification (as opposed to Bordeaux) that applies throughout the region. In addition to the Chablis appellations of origin, winemakers are free to market their wines under Burgundy's regional appellations. Other grape varieties are also permitted for this purpose. 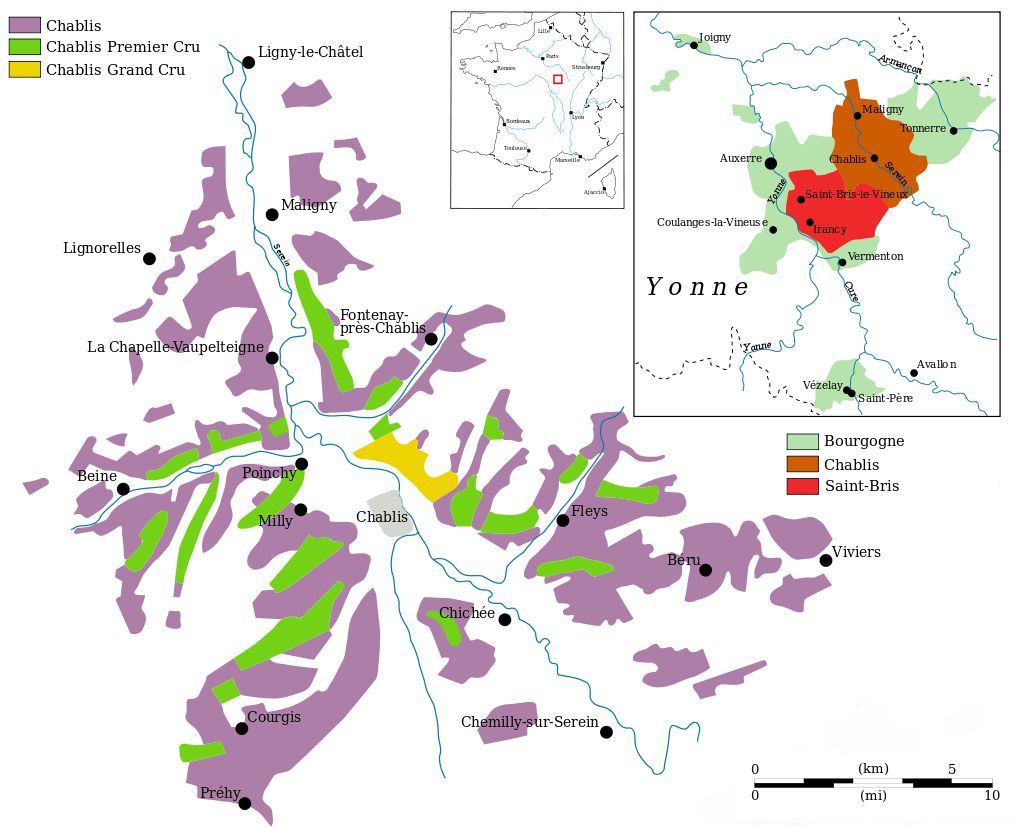 This top appellation covers around 100 hectares in seven top sites on a south-facing slope north of the town of Chablis. These are Blanchot (12 ha), considered the best, as well as Bougros (12 ha), Grenouilles, Les Clos (27 ha), Les Preuses (11 ha), Valmur (13 ha) and Vaudésir (14 ha). Another vineyard called La Moutonne is not listed as Grand Cru, but is allowed to display the designation on the label because 2.3 hectares of it are located in the two sites Vaudésir and Les Preuses. The yield limit is a maximum of 45 hl/ha. The wines account for only 5% of Chablis production.

This appellation covers a very large area with around 2,300 hectares of vines. No vineyard may be mentioned on the label. The yield limit here is also 50 hl/ha. These wines account for about 60% of the production. In good vintages, this can be an excellent, classic Chablis.

This appellation covers 1,800 hectares of vineyards in the poorer soils and sites around Chablis, but only a small proportion of these are used. The yield limit is also 50 hl/ha. There are efforts to change the somewhat trivialising name or to abandon this class altogether.