Third largest canton of Switzerland with the capital Sion (french: Sion). In 2007, scientists at the University of Basel discovered that vines were already being cultivated here between 800 and 600 BC. Today, the vineyards extend over 50 kilometres from the German-speaking Upper Valais to the French-speaking Lower Valais along the Rhône at an altitude of 450 to 650 metres above sea level. Those of Visperterminen in the Upper Valais are even considerably higher at 1,100 metres. The Riebe vineyard there is the highest vineyard in Central Europe. The majority of the vineyards are located on the right bank of the Rhône, facing south from Martigny to Leuk. Smaller areas are located between Lake Geneva and the Rhône knee near Martigny. The vineyards on steep slopes, bordered by high walls, are mostly terraced, some of them as so-called "tablars" cut horizontally into the slope. Due to the extreme inclination, some areas are among the steepest vineyards in Europe. Limestone, gneiss, slate and alluvial soils predominate. 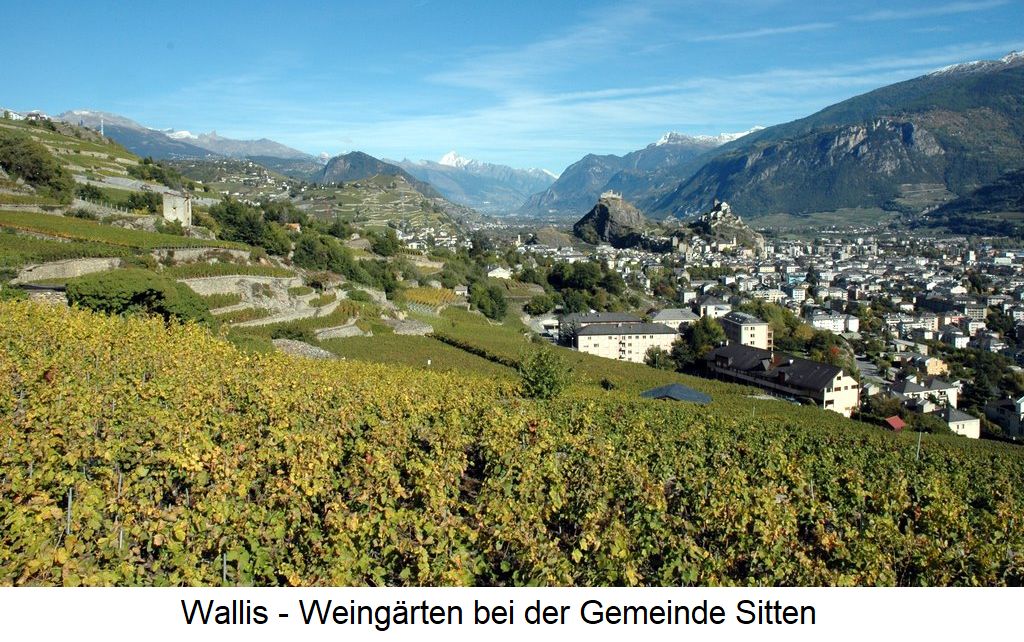 Valais is one of the six Swiss wine regions. The vineyards cover 5,236 hectares. They are characterised by around 60 different, mostly autochthonous grape varieties, with only four of them accounting for almost 90% of the area. These are Fendant(Chasselas), Pinot Noir, Gamay and Silvaner with more than half. Together with the neighbouring Italian Aosta Valley, a geographical island is formed with a variety of very old, autochthonous grape varieties, known as old vines. Traditionally for Switzerland, the white wines are still partially subjected to malolactic fermentation. The traditional red wine Dôle is made from Pinot Noir and Gamay. A rarity are the so-called 36 Plants, which are wines made from (formerly actually 36) different grape varieties. A speciality are sweet late harvests (here also called Flétri) with a potential alcohol content up to 20% vol. Above Sierre, the glacier wine (Vin des Glaciers) comes from the Val d'Anniviers (Eifisch Valley).

Sources of Purchase for Wallis/Valais 1

In this section you will find
currently 144,826 Wines and 22,894 Producers, including 2,432 classified producers.
Rating system Their sources in Wine Guide Wine Samples