With 6,000 years of wine history, Romania is one of the oldest and most traditional wine-growing countries in Europe. The Greek poet Homer already mentioned Thracian wines in his Iliad in the 8th century and the historian Herodotus (482-425 BC) tells of the wine trade of the Greek colonists on the Black Sea coast. German settlers from the Rhine-Moselle region followed the call of the Hungarian King Géza II. (1130-1162), the ruler of the area at the time, and revived wine-growing in Transylvania in the 12th century, and in the 18th century they were the Swabians brought to the country by the Habsburg ruler Maria Theresa (1717-1780). The historical landscape of Bessarabia, where wine-growing has also existed for 5,000 years, was inhabited mainly by Romanians at the beginning of the 19th century. This region, which is now part of Moldavia, belonged to Romania from 1917 to 1940

Romania belongs to the temperate climate zone and lies on the same latitude as France. Balanced rainfall, warm summers and long, dry autumns are ideal for viticulture. The individual parts of the country differ climatically, however, due to the natural barrier of the Carpathian Mountains. Transylvania to the west of the Carpathians is still characterised by the maritime climate of the Atlantic winds. However, the Carpathians prevent these from reaching the east and south of the country. In Moldova (east of the Carpathians), a continental climate prevails with cold air currents from Ukraine. In Wallachia (south of the Carpathians) and Dobruja there are Mediterranean influences. The three most important regions are Moldova, Muntenia and Oltenia, where about 80% of Romanian wines are produced. The regions and wine-growing areas:

The region is located in the southwest of the country on the border with Serbia and Hungary. The wine-growing areas are Buzias-Silagiu, Dealul-Tirolului, Minis (known for its red wines from Cadarca and Cabernet Sauvignon), Moldova-Noua, Recas, Severinului and Teremia-Mare (known for its white wines from Riesling Italian).

The two regions are located in the northwest on the borders with Hungary and Ukraine. The wine-growing areas are Diosig, Simleul-Silvaniei and Valea lui Mihai. Red wines and white wines.

The region is located in the extreme southeast on the Black Sea and is bordered by the Danube (Dunarea) in the west. The wine-growing areas are Istria-Babadag, Murfatlar, Ostrov and Sarica-Niculitel. In Romania's sunniest climate with low rainfall, soft red and rosé wines grow here.

The largest region with one third of the vineyard area lies east of the Carpathians in the east of the country on the border to Moldova and Ukraine. The wine-growing areas are Bujor, Cotesti, Cotnari, Covurlui, Dealul Bujorului, Husi, Iasi, Ivesti, Nicoresti, Odobesti, Panciu (known for its sparkling wines), Tutova and Zeletin.

The region with the capital Bucharest is located in the south in the Southern Carpathians. The wine-growing areas are Dealurile Buzaului, Dealul Mare, Pietroasele, Samburesti and Stefanesti. Here there are the highest average temperatures in Romania. Today, the hill country is best known for its red wines and rosés made from international varieties. In the times of the USSR, these wines were preferably sweet.

The region lies in the southwest of the country. The wine-growing areas are Corcova, Crusetu, Dealurile-Craiovei, Drăgășani, Drincea, Plaiurile-Drincei, Sadova-Corabia, Segarcea and Targu-Jiu. Here, excellent red wines are made from the autochthonous variety Fetească Neagră and from Cabernet Sauvignon. The German winery Reh Kendermann acquired 350 hectares of vineyards here in 2001 and founded the "Carl Reh Winery".

The region in the centre is especially known for its white wines. German immigrants brought many of their own grape varieties with them. The wine-growing areas are Alba Iulia, Bistrita-Nasaud, Lechinta, Sebes-Apold and Tarnave. 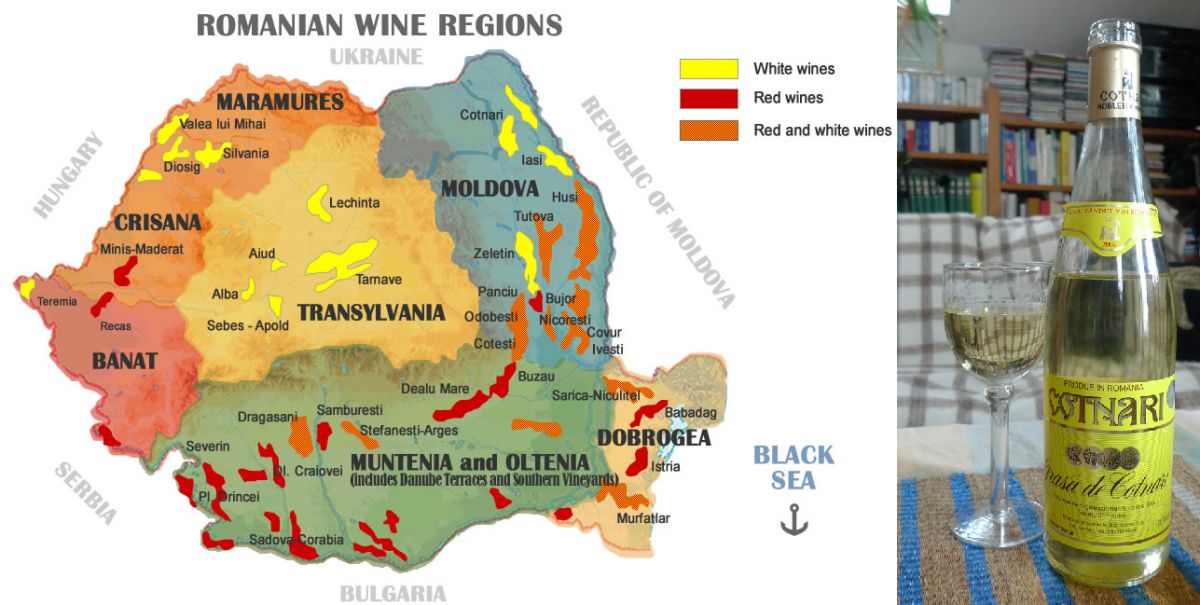 The map shows the regions with their typical wine types. What the famous Tokaj is for Hungary, the rather similar wine type Cotnari is for Romania. This traditional wine was somewhat forgotten and has been revived.

In the 1960s, many new vineyards were planted. During the communist era, production was in state hands. Due to the political upheaval, a wave of privatisation began in 1990 with many micro-owners. The leading production companies merged into a private export-distribution company. The annual wine production amounts to between three and four million hectolitres. About 75% are white wines, 25% red wines. Romania also has a significant production for table grapes; the most important are Afus Ali, Chasselas, Muscat d'Hamburg, Italia and Victoria. In 2016, 182,762 hectares of vines were declared; the grape variety index (Kym Anderson):

Quality wines of specified regions with controlled origin. Prescribed quality wine grape varieties. The potential alcohol content must be at least 11.5%, the existing at least 10% vol.

This corresponds mutatis mutandis to a predicate wine. Minimum must weights are prescribed for each type. The codes refer to the degree of ripeness or the proportion of noble rot grapes; the second "C" refers to "Cules"(grape harvest):