In ancient times, Phoenicians, Greeks and Romans brought vines to the Iberian Peninsula. Under the long Moorish rule from the 8th to the 12th century, viticulture stagnated, but did not come to a complete standstill despite the ban on alcohol. As in many other countries, the Roman Catholic monastic order of the Cistercians had a decisive influence on viticulture; in the 12th century they founded 18 monasteries in Portugal. King Dinis (1279-1325) promoted agriculture and viticulture on such a large scale that the proceeds were used to build up a merchant fleet, thus creating the basis for Portugal's rise to become a world power. He was therefore given the nickname "Rei lavrador" (King of the Peasants). Under the Avis kings, especially Emanuel I. (1469-1521), Portugal rose to become a leading European trading and naval power. Henry the Navigator (1394-1460) initiated voyages of discovery along the West African coast. Muscat and Malvasia grapes were planted on the rediscovered island of Madeira. A flourishing wine trade with England developed.

Portugal's most famous and best-known wine is undoubtedly port. Its great triumph began when the Methuen Treaty was concluded between England and Portugal in 1703. This treaty provided for large tariff reductions for the import of Portuguese wines. As early as 1756, the famous Prime Minister Marquês de Pombal (1699-1782) ordered the exact demarcation of the Douro region. Along with Chianti, this was one of the very first regions to be controlled for origin. A special role in the port wine trade was played by the Factory House opened in 1790 in Porto, where the British factors negotiated and concluded their business among themselves. A wine similar to port is Madeira from the island of the same name in the Atlantic. Big export hits with 40% of the total volume are the rosé wine Mateus from the company Sogrape, created in 1942, and similar products such as Lancers from the company Fonseca. With a share of over 50%, Portugal is the world's largest producer of corks.

The elongated country has a wide variety of soil types from north to south, as well as very different climates with continental and Mediterranean influences and sometimes extreme fluctuations in summer and winter. In the cool, rainy and fertile north of Portugal, fresh, rather quick-to-consume wines grow on barren, sandy granite soils. In the Minho area, it can rain almost every day, while the left side of the Guadiana River in the Alentejo or parts of the Douro area often go many months without a drop of rain.

The climate in the Alentejo and Dão areas varies between Mediterranean and continental with large temperature variations between day and night and summer and winter. The areas of Bairrada and Colares are in the sphere of influence of the Atlantic with extreme climatic variations with a lot of rain and cool temperatures. The climate in the central agricultural heartland is mild all year round. It has mineral soils interspersed with gravel and benefits from its location on the River Tagus. In the far south, the climate is hot and 50% of cork production comes from here

In the 19th century, mildew and phylloxera destroyed most of Portugal's vineyards. It was not until 1930 that the vineyards were rebuilt. After the end of the dictatorship in 1974, the changeover from the production of cheap mass wines to quality products began. Viticulture is an important economic factor in Portugal, as around 15% of the population live from it. 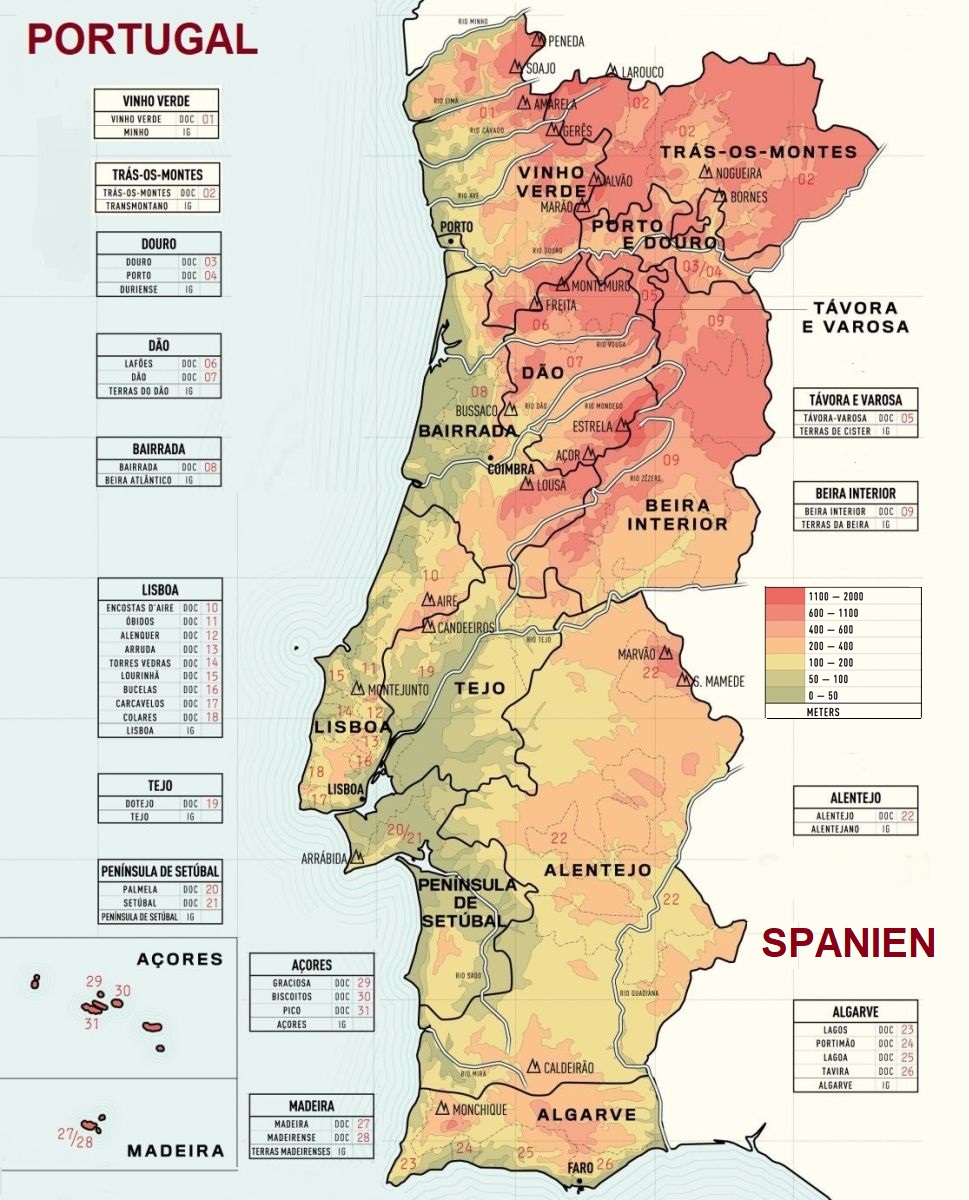 In 2014, 6.2 million hectolitres of wine were produced from 224,000 hectares of vines. White wines account for 30% of production and rosé and red wines for 70%. For the most part, these are cuvées from several grape varieties blended together. In the country of the 250 authorised grape varieties, most of which are autochthonous, these were also largely cultivated as Gemischter Satz in the past. The frequent synonyms and homonyms cause confusion, but more and more ancestries are being clarified by DNA analyses. In the 1980s, mainly due to EU regulations concerning quality wines, single-variety vineyards began to be planted. Many of the grape varieties also exist (partly with different names) in neighbouring Spain. The grape variety list in 2016 with the top 50 (statistics Kym Anderson):

In August 2009, the EU wine market regulation came into force with fundamental changes to the wine designations and quality levels. There are the following new designations or quality levels (see also in detail under Quality System). The traditional terms Vinho Regional and DOC are still possible as alternatives:

Wine without a narrower designation of origin. This lowest quality level is usually a blend of wines from different growing areas.

Regional wine with a protected geographical indication. The regulations compared to DOC are much less strict. The regulations contain certain criteria such as grape variety and alcohol content, but offer relatively great leeway. In principle, all grape varieties permitted in the region can be used alternatively, but at least 85% must come from the area. There are 14 regions of land wine.

The former precursor IPR to DOC was abandoned in 2011. Most of the former IPR areas were upgraded to DOC in the course of a reorganisation.

Quality wine with protected designation of origin. Grape varieties, minimum maturation times in barrels and bottle, minimum values for alcohol content, acidity and total extract (dry extract), as well as colour and aroma are prescribed. A sensory and analytical test must be carried out before marketing. There are 31 quality wine areas.

For the age or with regard to maturation of a wine, there are the designations Verde (green, no ageing), Maduro (old or matured in barrel), Reserva (red wines three years old, of which one in bottle, white wine one year, of which six months in bottle), Garrafeira (like Reserva and higher alcohol content) and Velho (red wine three, white wine two years). The degrees of sweetness indicated on the label are seco = dry, meio seco = semi-dry, meio doce = semi-sweet and doce (also adamado, suave) = sweet.

Sources of Purchase for Portugal 60