Bulgaria is one of the countries with the oldest wine-growing tradition in Europe. The origins on the territory of today's state point to a beginning as early as 5,000 years ago, based on archaeological finds and traditional texts. Thracian tribes north and south of the Balkan Mountains cultivated wild gra pes and practised a distinct cult in honour of the wine god Dionysus. The Thracians are credited with cultivating the oldest Bulgarian grape varieties or their ancestors such as Mavrud, Pamid, Dimyat, Melnik (Shiroka Melnishka) and Gamza (Kadarka). At the time of the Roman Empire, wine from Thrace was a sought-after export to Greece, Sicily, Asia Minor (Anatolia, Turkey) and Egypt. In the Middle Ages, viticulture reached a peak due to the monasteries with their extensive vineyards. In 1393, the Bulgarian Empire was conquered by the Ottomans and remained under Islamic rule for almost 500 years until 1878. Only the production of table grapes was permitted. The prohibition of alcohol led to a strong threat to viticulture. How important viticulture was taken by the state is shown by the fact that immediately after Ottoman rule in 1879, a wine law was passed even before a constitution was adopted. However, viticulture was not resumed on a larger scale until after the First World War and was practised exclusively by small winegrowers with autochthonous varieties.

After the Second World War, wine production was gradually industrialised during the years of socialism. A collective system was introduced, viticulture schools were founded and European grape varieties were planted. In the 1960s, Bulgaria developed into an important wine exporting country. Until the 1960s, the largest quantities of wine were pressed from traditional varieties. Temperature-controlled fermentation tanks were rather the exception. Then, with the export-oriented wine economy, the share of intarnational varieties increased. This, together with the introduction of high vine training and modern cellar technology, led to the great export successes. The political change in 1989 led to a rethink. In 1990, the state wine-growing monopoly VINPROM was dissolved and most farms privatised. This took the new owners by surprise, many of whom had no knowledge of viticulture. From 2000, however, things started to look up. Since then, the focus has been on quality, not quantity. Many family wineries were founded. In addition, many foreign investors came to Bulgaria because of the excellent wine-growing conditions. Accession to the EU in 2007 opened up good sales prospects on the European market. The simultaneous loss of other markets (Russia, North Africa) reduced the demand for lower quality wine.

There are the five wine-growing regions shown in colour on the map, which are divided into sub-regions. The climate and soil conditions provide excellent conditions for viticulture. The country is situated in the centre of the Balkan Peninsula at the same latitude as Tuscany in Italy and Bordeaux in France, between the temperate continental and Mediterranean climate belts. The various mountain formations such as Pirin, Rhodope and especially the Balkan mountain range running east-west through the whole country protect the country from Aegean and Adriatic climatic influences. The humid Atlantic influences have the greatest climate-determining role. 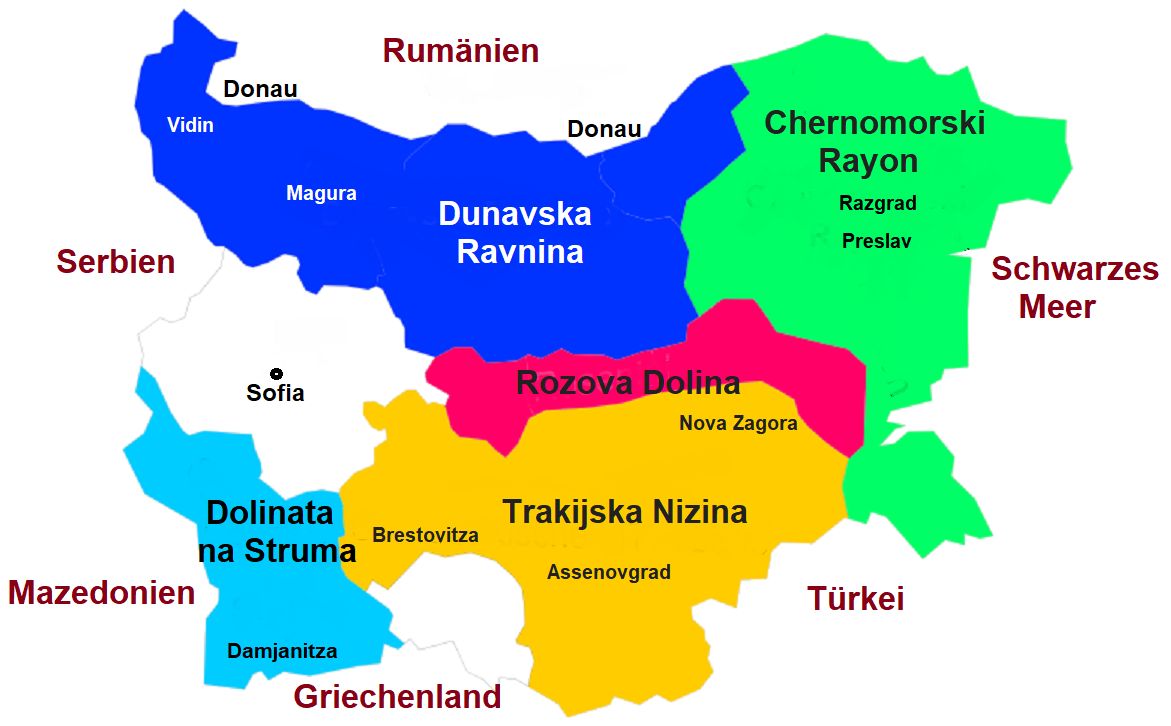 The gently rolling landscape between the Danube and the Balkan Mountains is criss-crossed by many rivers. Wine-growing areas are Biala, Dve Mogili, Ljaskovetz, Lom, Magura, Nikopol, Novo Selo, Orjahovo, Pavlikeni, Pleven, Rousse, Suhindol, Svischtov and Vidin. The region is known for its red wines, dessert wines and sparkling wines.

The region borders the Danube and Romania to the north and the Black Sea coast to the west. The area includes the geographical units Dobrudja Plain and the Ludogorie Hills in the north to Strandja Mountains in the south. Production areas are Burgas, Euxinograd, Kableshkovo, Kavarna, Khan Krum, Novi Pazar, Pomorie, Preslav, Razgrad, Shumen, Silistra, Targovishte and Varn. The best Bulgarian white wines come from here.

The region (southern flank of the Balkan Mountains) extends to the east on all the flat foothills of the Balkan and Sredna Gora Mountains in the vicinity of the towns of Karlovo, Karnobat, Nikolaevo, Zhivatchevo, Slaviantzi, Sliven Straldja and Sungurlare. The region is known for its dessert white wines and grape distillates (Elenovo, Straldja, Karnobat, Sungurlare).

The region stretches along the border with Turkey across the Thracian lowlands, south of the Balkan and low mountain ranges, in the large valleys of the Maritza and Tundsha rivers. In the southeast it is bordered by the foothills of the Sakar Mountains. A temperate continental climate prevails. Wine-growing areas are located around the municipalities of Assenovgrad, Brestovitza, Brezovo, Elhovo, Harmanli, Haskovo, Ivaylovgrad, Jambol, Ljubimetz, Nova Zagora, Ognjanovo, Orjahovitza, Parvomay, Pazardjik, Perushtiza, Peshtera, Plovdiv, Saedinenie, Septemvri, Sliven, Stambolovo, Stara Zagora and Tchirpan. Here 70% red wine and 30% white wine varieties are cultivated. The region is known for its sparkling wines in white and rosé.

The region is situated in the narrow valley of the Struma River on the border with Greece and northern Macedonia. It is particularly known for its red wines made from the Shiroka Melnishka (Melnik) and Ranna Melnishka Loza (Early Melnik) varieties. The growing areas are Blagoevgrad, Boboschevo, Damjanitza, Gotze Deltchev, Harsovo, Kapatovo, Kresna, Kulata, Levunovo, Melnik, Petrich, Sandanski, Smotchevo and Vinogradi. Here, mainly red wine varieties are cultivated on about 75% of the area

The vineyards are located on the numerous mountain foothills, in the side valleys and the lowlands of the countless river courses. At the beginning of the 2000s, the vineyards still covered about 150,000 hectares. After EU accession in 2007, extensive clearing measures were carried out. The vineyards now cover 63,000 hectares with an annual wine production of 745,000 hectolitres. About two thirds are red wines and one third white wines. The grape variety table in 2016 with the top 18 (statistics Kym Anderson):

Wines without a designation of origin. These must have a natural alcohol content of at least 7.5% vol.

A country wine with a protected geographical indication. The old designation RV (Regionalno Vino) is no longer in use. There are two territorial wine areas PGI Danube Plain (Northern Bulgaria) and PGI Thrace Valley (Southern Bulgaria).

A quality wine with a protected designation of origin. The old designations GNP (Garantirano Naimenovanie sa Proischod = guaranteed) and GKNP (Garantirano i Kontrolirano Naimenovanie sa Proischod = guaranteed and controlled) are no longer in use. Quality wines, on the other hand, may only come from certain certified regions. Therefore, their special characteristics are always due to the specific vineyard and region. Quality wines are also further classified (see below). There are around 50 PDO areas.