Politically, the island in the eastern Mediterranean forms the Republic of Cyprus, which under international law comprises the entire island of 9,251 km². De facto, however, it consists only of the larger southern part with 5,384 km², because the smaller north with 3,355 km² forms the regime (not recognised by many states) Turkish Republic of Cyprus. Two British military bases with 255 km² of land area are under the control of England as a remnant of colonial times. The distance to the south coast of Turkey is only about 70 km, to the east coast of the Greek island of Rhodes almost 400 km and to the mainland of Greece even more than 800 km. Viticulture dates back to the 3rd millennium BC. According to mythology, the Greek wine god Dionysus preferred wines from the island for his drinking parties. The foam-born Aphrodite emerged from the sea at the "Roman Rock" and went ashore near the Akamas peninsula. The Phoenicians and Greeks established the tradition of sweet wines in antiquity. Floor mosaics with wine motifs in the port city of Paphos on the southwest coast bear witness to this ancient wine-growing culture.

After the Third Crusade, the island came into the possession of the Order of St. John in 1191, later of the Order of the Knights Templar and, after their dissolution in 1312, of the Knights of St. John again. The order managed so-called commends (estates with vineyards). Their headquarters was the still existing castle of Kolossi, known as the "Grand Commandery", which gave the name to the famous wine-growing region and the legendary sweet wine Commandaria. At that time, this coveted wine was supplied to many European ruling houses. In the period 1489 to 1571, Cyprus belonged to the Republic of Venice. Ottoman rule from 1571 to 1878 and the associated ban on alcohol caused a total decline in wine culture. Under the British administration from 1878 to 1960, there was an upswing again. Commandaria and similar wines formerly known as "Cyprus Sherry" developed into export racers. 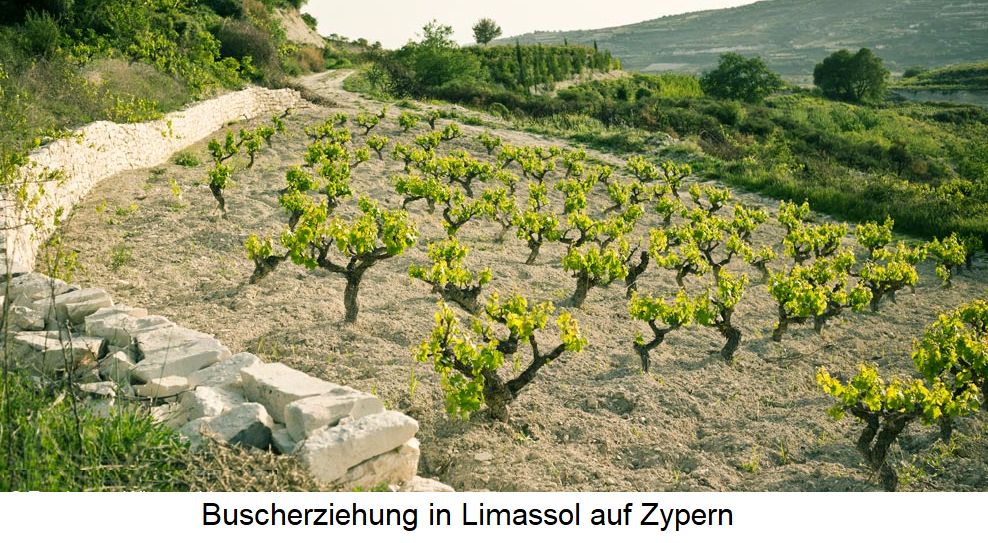 From the early 1990s onwards, young, well-educated descendants of long-established families and a few investors reinvented Cypriot viticulture, so to speak. This new generation broke with the old myths and began to combine tradition and the Middle Eastern way of life with Western dynamism. A number of modern, well-equipped wineries were built in the villages of the Troodos Mountains. The small vineyards form a perfect wine ecosystem in the barren scrubland, largely without artificial irrigation or chemical pesticides. Phylloxera has never reached the island, which is why the vines root un-grafted in the soil. It was not until the 1970s that European varieties were introduced to Cyprus.

The vineyards are mostly located in the southwest of the island in the southern foothills of the Troodos Mountains at 250 to 1,500 metres above sea level, making them some of the highest vineyards in Europe. Pitsilia and the northern half of Commandaria have volcanic soils, the other areas mainly limestone. The climate is typically Mediterranean, with mild winters and hot summers and low rainfall. The vineyards cover about 8,000 hectares, from which about 100,000 hectolitres of wine are produced. Many are cultivated in the traditional bush style (gobelet) shown in the picture above. However, table grapes and sultanas are also produced. Cypriots were not too big wine drinkers in the past, consuming mainly beer, the marc spirit zivania and ouzo. However, there is a trend reversal in favour of wine. In 2016, only the first two varieties were reported. In the grape variety table, however, all varieties are included with the quantities of 2010, which were very much included this year (Kym Anderson):

It was not until Cyprus joined the EU that an origin-based classification model based on the French model was introduced, which became effective in 2006. Five areas are defined for OEOP wines with designation of origin (OEOP = Oinos Eleghomenis Onomasias Proelefsis). These wines must come from vineyards higher than 600 metres above sea level. They must be made from 85% indigenous varieties such as Xynisteri (white), as well as Maratheftiko, Mavro or Ophthalmo (all red). Furthermore, the proportion of the Mavro variety must not exceed 60 or 70%, depending on the growing region. Vinification and bottling must take place in the OEOP areas. The designation of origin for country wines corresponds to the political subdivision with the four districts of Larnaka, Limassol, Nicosia and Paphos. Here, the winegrowers are given free rein, especially with regard to the use of international grape varieties. The five OEOP areas are:

CommandariaThe area comprises 14 municipalities in the southern foothills of the Troodos Mountains north of Limassol. It was the first to be defined back in 1980.

Krasohoria Lemesou: The area comprises 20 municipalities in the southern foothills of the Troodos Mountains north of Limassol. Two sub-areas are Afames and Laona.

Laona Akamas: The area includes six municipalities on the coast in the northwest north of Paphos. The mythical Akamas peninsula is a protected area because of its special flora.

Pitsilia: The largest area comprises 32 villages on the eastern edge of the Troodos Mountains above Commandaria and is also known for its fruit trees and rose cultures.

Vouni Panayia Ambelitis: The double area is located in the central west of the island on the western edge of the Troodos Mountains northeast of Paphos.

Sources of Purchase for Cyprus 1