Unfortunately there is no information about Chianti Classico DOCG available.

DOCG area for red wine in the Italian region of Tuscany. This wine, which is one step above the "normal" Chianti, comes from the classic zone defined as early as 1716 by Grand Duke Cosimo III of the Medici family. (1642-1723), but at that time it was much smaller. In 1932, other areas or municipalities were added to complete the current area. The very densely wooded area covers 70,000 hectares, but only 7,000 hectares are used for viticulture. The suburbs of Florence form the border to the north, the Chianti mountains to the east, the rivers Pesa and Elsa to the west and Siena to the south. The round 70 kilometre long wine road "Via Chiantigiana" connects the two cities of Florence and Siena. The area includes in its entirety the municipalities of Castellina, Gaiole, Greve and Radda, and in part the municipalities of Barberino Val d'Elsa, Castelnuovo Berardenga, Poggibonsi, San Casciano and Tavarnelle Val di Pesa. 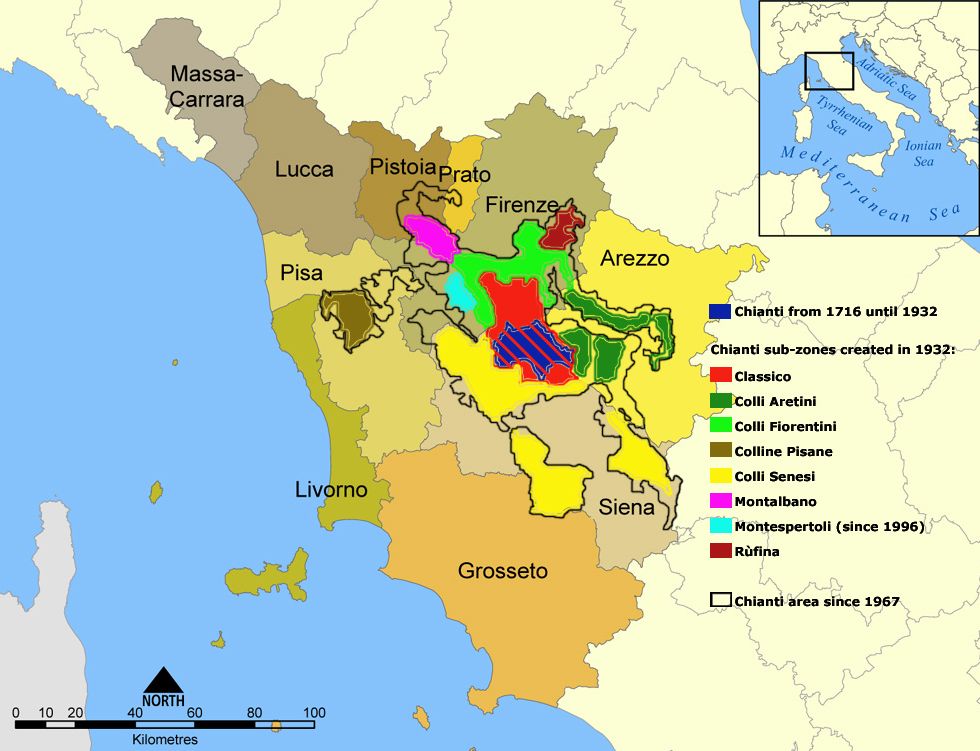 The best sites are considered to be the middle altitudes south of Greve, north of Radda and Castellina, and from the slopes extending from Gaiole southwards to Castelnuovo towards the Arbia valley. Compared to the normal Chianti area, there are numerous hilly areas between 250 and 600 metres above sea level with dry and warm soils. The typical Chianti Classico soils are Galestro (loose calcareous marl) and Alberese (weathered sandstone), which do not get too wet even during heavy rainfall. The Galestro also gave its name to an IGT white wine. The trademark of the area and also of the association "Consorzio del Marchio Storico Chianti Classico" is Gallo nero (a black rooster), which goes back to a legend about the origin of the borders in the Chianti area. As with Chianti, there is also a DOC area Vin Santo del Chianti Class ico.

In the past, Chianti Classico had more and more problems to distinguish itself from its "smaller brother" Chianti, the two wines were often confused. Therefore, some standards were issued by the Consorzio to manifest the difference. The basic statement is that these are two categories of wine that are fundamentally different in terms of production methods, qualitative characteristics and environmental conditions, despite certain similarities. The two wines may thus consider themselves independent, even if for historical reasons they merge into the single protected designation of origin Chianti.

The new regulations came into force after a transitional period of several years, starting with the 2006 wine harvest. No normal Chianti may now be produced in the Chianti Classico area. If the prescribed yield limits or the minimum alcohol content are not complied with, the (previously given) possibility of declassification to normal Chianti is no longer allowed. Bottling must be carried out within the production area, which is not otherwise prescribed by Italian wine law for any wine. Marketing may take place no earlier than 1 October of the year following the harvest.

The minimum proportion of Sangiovese has been increased from 75% to 80%, whereby single-varietal is also permitted. The proportion of other red varieties may not exceed 20%. This is mostly Canaiolo Nero, as well as Cabernet Sauvignon, Merlot and Syrah. The formerly permitted white varieties Malvasia del Chianti (Malvasia Bianca Lunga) and Trebbiano Toscano are now prohibited. The maximum permitted yield applies both per plant, with a maximum of three kilograms per vine, and per hectare, with 7,500 kilograms (which corresponds to a total quantity of 52.5 hectolitres of wine); the maximum must yield is 70%. The alcohol content must be at least 12% vol. and the residual sugar must not exceed 4 g/l. With 12.5% vol. and an ageing period of 24 months (of which at least three months in the bottle), it can call itself Riserva. Riservas are only produced by the best producers in very good years. The best vintages are considered to be 1985, 1988, 1990, 1993, 1995, 1997, 1999, 2001 and 2004.

At the beginning of 2014, a new three-level quality pyramid was introduced. The basis is "Chianti Classico Annata". The middle level "Chianti Classico Riserva" corresponds to the "old" specifications. A new quality level is "Chianti Classico Gran Selezione" with a maturation period of at least 30 months (of which at least three months in bottle), whereby the grapes must come exclusively from the producer. There are even stricter regulations than for the Riserva, these are deep ruby red colour, spicy persistent aroma, dry balanced taste, at least 13% alcohol by volume, at least 4.5 g/l total acidity and at least 26 g/l extract. In addition, this wine may not be bottled in the folkloric bast bottle Fiasco. Wines not yet marketed from the 2010 vintage onwards could be retroactively declared with the new quality class

Map: By User:Kattivik - My own work on Provinces of Tuscany, CC BY 2.5, Link