Website: www.domaene-wachau.at
Social Media:
Associations: Vinea Wachau
Work time:
Our Vinotheque-opening hours: April to October Monday to Saturday from 10 am to 5 pm November to March from Monday to Friday from 10 am to 5 pm Tasting and buying of the complete wine portfolio in the wine shop possible. Cellar tours with commented wine tasting: from June to October – every Saturday Beginning at 11 AM Lasting about 1.5 hours Register at event@domaene-wachau.at or +43 2711 371 10 Group tours on request at individual times and dates

Set a new bookmark for the wines of Domäne Wachau. The currently tasted wines then appear on your personal Wine Reviews homepage.
Only Members can bookmark

Where to buy wines of Domäne Wachau?

About Producer Domäne Wachau, Dürnstein is a premium member of wein.plus 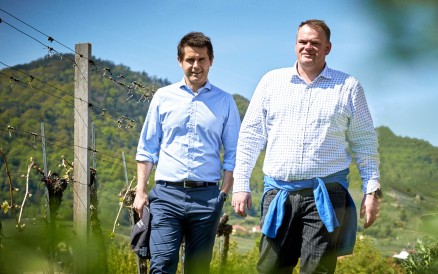 Large Winzergenossenschaft in the Lower Austrian winegrowing region of Wachau, based in Dürnstein, which was founded in 1938 by purchasing the former vineyard of the Starhemberg family under the name...
More

Large winegrowers' cooperative in the Lower Austrian winegrowing region of Wachau, based in Dürnstein, which was founded in 1938 by purchasing the former vineyard of the Starhemberg family under the name "Winzergenossenschaft Wachau". It was then renamed "Freie Weingärtner Wachau" in 1990 and has been operating under the new name "Domäne Wachau" since 2008. Johann Martin was elected as the new chairman at the 2009 general assembly. The managing director is Roman Horvath (Master of Wine). Heinz Frischengruber is responsible for oenology. The philosophy is as follows: Domäne Wachau strives for the most authentic character of origin possible in the wines. The Wachau and the large individual sites or vineyards should be expressed precisely and clearly. It is also important to have long and stable fruit, which then turns into complex ripeness notes after a few years in appropriately high-quality wines. The high storability of selected Smaragden is an explicit goal in winemaking through this approach. The entire production process is carried out according to certified sustainable criteria of Nachhaltig Austria. 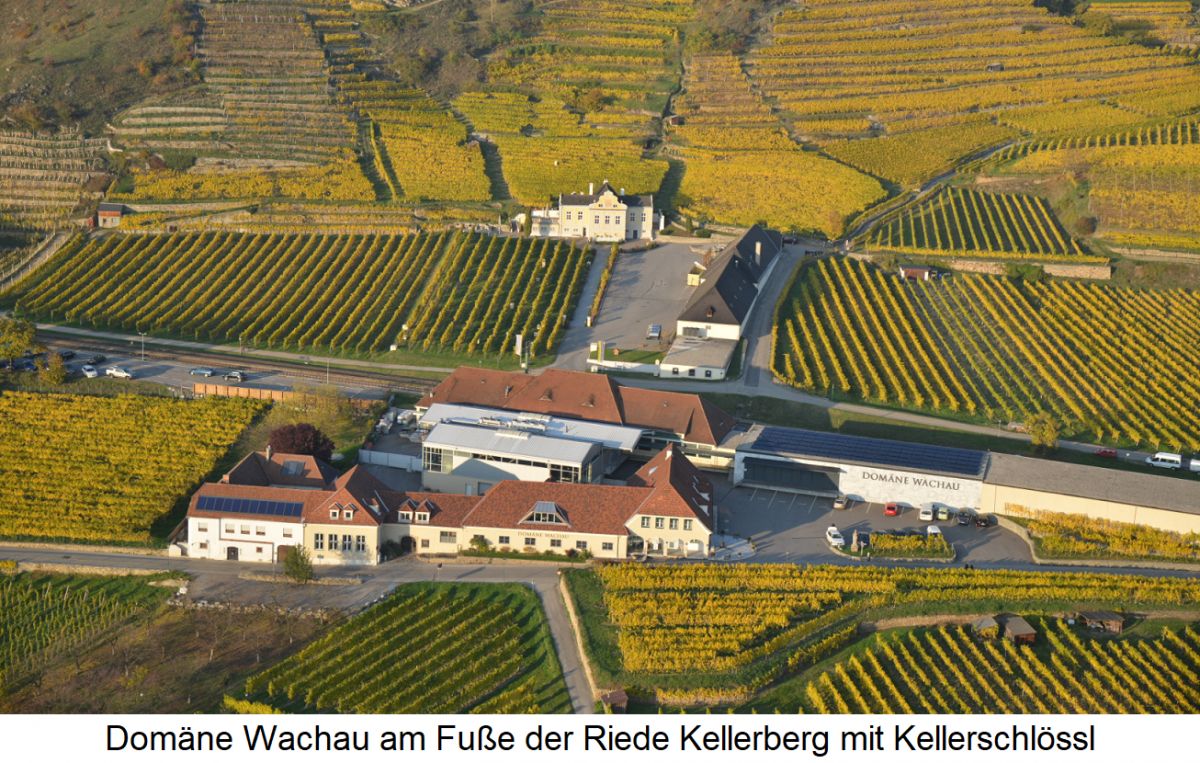 About 250 member wineries cultivate 440 hectares of vineyards, which amounts to about one third of the Wachau area. These are bound by contracts for three years. The cultivation must be carried out according to the above-mentioned criteria regarding ecology, economy and social issues. Based on this, a bonus system was created for the members. Great importance is attached to training, know-how transfer and intensive personal contact. Those grape suppliers who ensure extra quality in the vineyards receive special surcharges on the grape prices as an incentive, depending on the location. In 2018, a new building for grape reception and vinification was put into operation under the wine terraces of the Kellerberg. The gentle processing of the grapes, which are basically hand-picked and selected according to grape variety, vineyard and degree of ripeness, takes place on four levels with the help of gravity. The pneumatic presses can also process small batches for micro-vinification. The vinification process is completed under perfect climatic conditions. 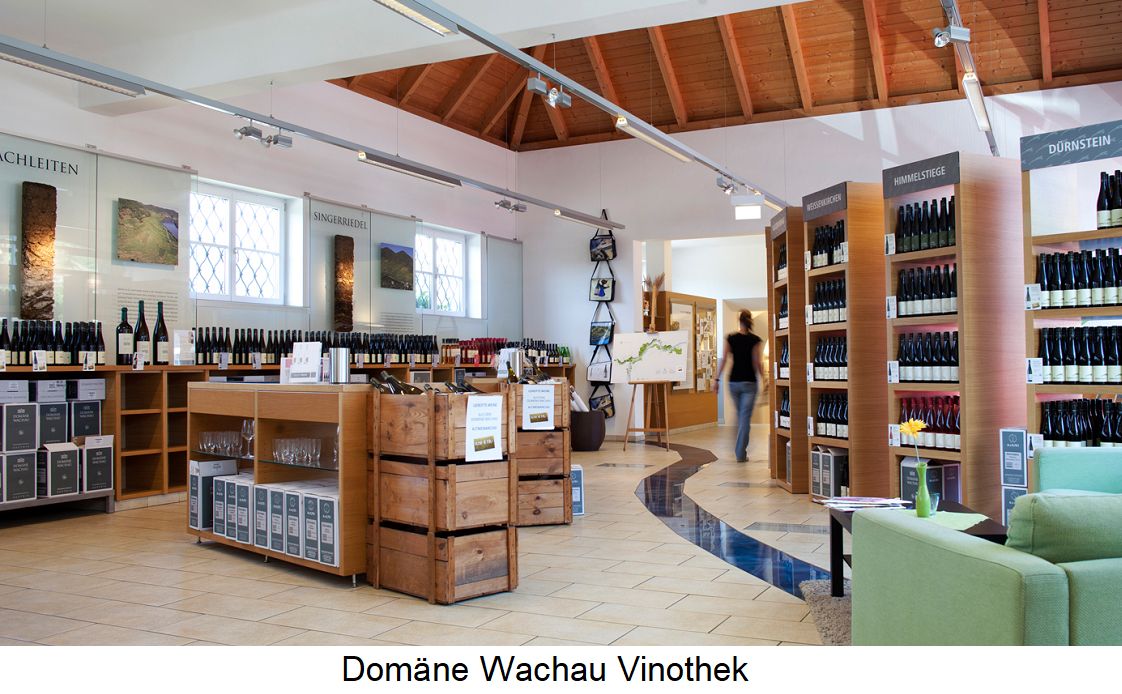 The famous "Kellerschlössel" was commissioned by Hieronymus Übelbacher (1674-1740), the provost of Dürnstein Abbey, and completed by Jakob Prandtauer (1660-1726), the creator of Melk Abbey, in 1715. Beneath the Kellerschlössel is the huge natural cellar dug in 1693. The baroque jewel lies at the foot of the famous top Wachau vineyard Kellerberg, the "house mountain" of the Domäne Wachau. Historic meetings took place here in 1955. The then Austrian Foreign Minister Leopold Figl (1902-1965) had access with his own key and frequently invited high-ranking politicians and diplomats to nightly negotiations in the run-up to the signing of the Austrian State Treaty. According to contemporary witnesses, the wines enjoyed on these occasions, such as "Dürnsteiner Katzensprung", contributed to the success. In 2005, on the occasion of the 50th anniversary of the Austrian State Treaty, the "Wachauer Katzensprung", which was served at the banquet at that time, was revived. The portfolio also includes the branded wine "Wachauer Himmelstiege". 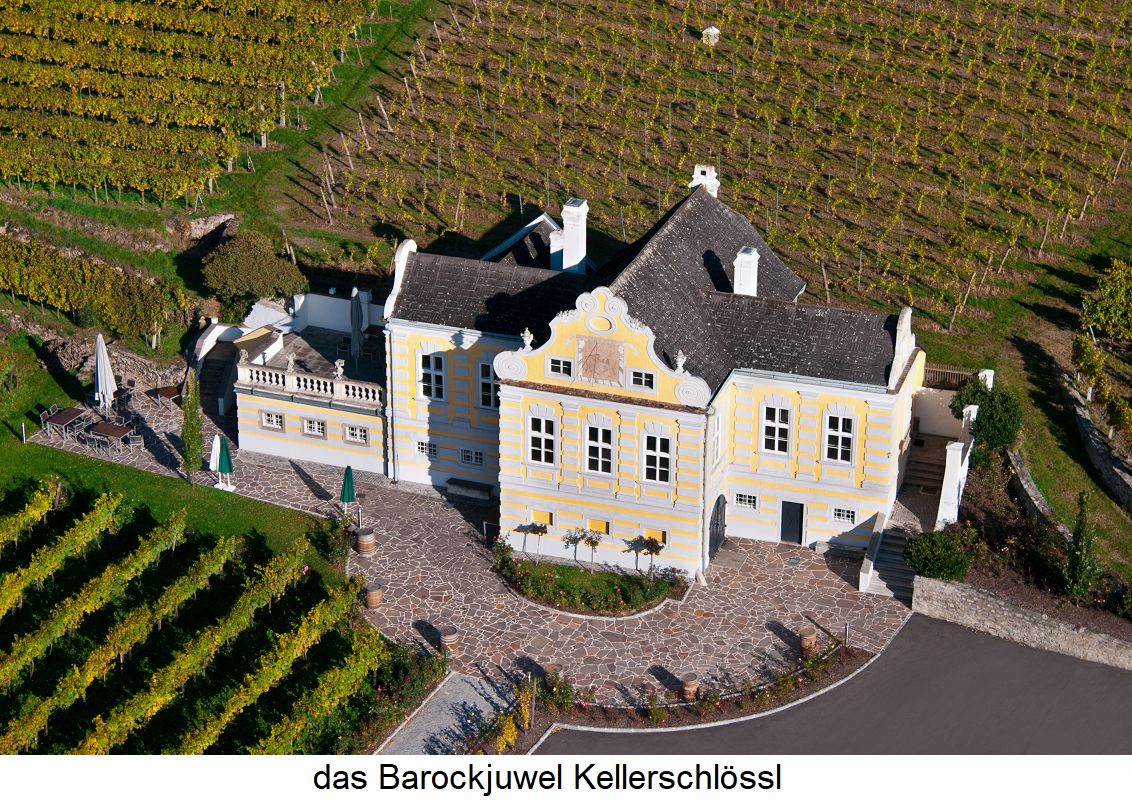 More than 90% of the wines produced are white. Grüner Veltliner is the lead variety, dominating with two thirds of the volume, the other varieties are Riesling (17%), Müller-Thurgau, Neuburger, Pinot Blanc, Chardonnay, Muskateller, Zweigelt (6%), Pinot Noir and St. Laurent. The grapes come from the best vineyards in the Wachau, such as Achleiten, Axpoint, Bruck, Hochrain, Kaiserberg, Kellerberg, Kollmitz, Loibenberg, Pichlpoint, Setzberg, Singerriedel and Tausendeimerberg(Burgberg). Among other things, the low yields of 39 to 55 hl/ha are responsible for the top qualities. In the cellar, the non-invasive motto is "controlled inactivity" with as few interventions as possible.

Domäne Wachau was one of the founding fathers of the Vinea Wachau Nobilis Districtus with the quality levels Steinfeder, Federspiel and Smaragd in 1983 with director Willi Schwengler. The top wines are the single vineyard Smaragde from Grüner Veltliner and Riesling, as well as the sweet wines (especially Riesling TBA Kellerberg). Wines dating back to 1947 are stored in the extensive archive. In 1999, Domäne Wachau was the first Austrian wine producer to win the title of "International Winery of the Year" awarded by Wine & Spirit. Around 2.5 million bottles of wine are produced annually. In the in-house distillery Grüner Veltliner is double distilled and matures for years in small wooden barrels. The top product is called "XA22".