Where to buy wines of Weingut Graf Adelmann?

Weingut Graf Adelmann, Kleinbottwar is a premium member of wein.plus

Set a new bookmark for the wines of Weingut Graf Adelmann. The currently tasted wines then appear on your personal Wine Reviews homepage.
Only Members can bookmark 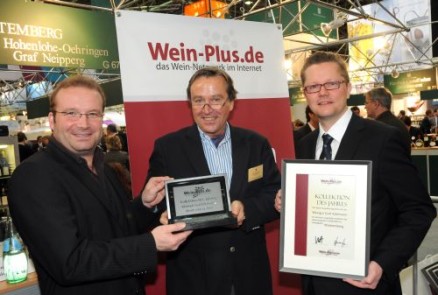 The winery is located in the municipality of Kleinbottwar (Württembergisch Unterland area) in the German wine-growing region of Württemberg. There is documentary evidence of viticulture at Burg Schaub...
More

0.75 L
2019 Grauburgunder dry
87 WP - very good What our ratings mean
10.23 €
Editor note: Nutty and a touch of floral pome fruit scent with delicate vegetable and spicy nuances. Clear, quite...
Reviewed: 9 November, 2020
More
Where can you buy this wine?

The winery is located in the municipality of Kleinbottwar (Württembergisch Unterland area) in the German wine-growing region of Württemberg. There is documentary evidence of viticulture at Burg Schaubeck for the first time more than 700 years ago in 1297. In 1914, the castle was inherited by the Count Adelmann family. Since 2102, the fifth generation of the family, Felix Graf Adelmann, has been in charge of the estate. The estate also includes other agricultural land, but this has been leased out since 1990. The wines are not vinified at the castle itself, but in the 500-year-old "Amtskeller" in the municipality of Kleinbottwar, a few hundred metres away from the castle. The vineyards, some of which are steeply terraced, cover 21 hectares of vineyards in the municipalities of Kleinbottwar (16 ha), Grossbottwar (1 ha) and Hoheneck (3 ha of terraces). The two single vineyards Kleinbottwarer Oberer Berg and Süßmund, defined as Grosse Lagen according to the VDP classification, are solely owned. The extensive range of grape varieties includes the red wine varieties Lemberger (Blaufränkisch), Samtrot, Spätburgunder (Pinot Noir), Frühburgunder, Trollinger (Schiava Grossa), Muskat-Trollinger, Cabernet Cubin, Cabernet Mitos, Dornfelder and Blauer Urban (Schiava Gentile), as well as the white wine varieties Riesling, Grauburgunder (Pinot Gris), Weißburgunder (Pinot Blanc), Muskateller and Traminer.

For the white wines, whole grape pressing is mainly practised. These are fermented cold to accentuate the aromas. The red wines are aged in wooden barrels after the classic mash fermentation. The dry estate wines bear the brand name "Brüssele", noble sweet wines (ice wine, TBA, etc.) "Brüssele'r Spitze". This premium line was already introduced in 1945 as the first German premium wine. The name goes back to the Barons of Brusselle-Schaubeck, who resided here from 1853 until the beginning of the 20th century. Other wines include. "Der Loewe von Schaubeck" (in white and red), the cuvée "Herbst im Park" (Lemberger, Pinot Noir, Cabernet varieties), and as Grosses Gewächs "Der Schwarze Löwe" (Lemberger) and "Das Lied von der Erde" (Riesling). At a gala dinner in honour of US President Ronald Reagan (1911-2004), hosted by German President Richard von Weizsäcker (1920-2015), a Lemberger from the house was served. Fine brandies and bottle-fermented sparkling wines are also produced. The winery is a member of the VDP and a founding member of the two groups HADES and Deutsches Barrique-Forum.

Weingut Graf Adelmann Region: Germany Württemberg
One of the best producers of the region
wein.plus Business Premium Member
In this section you will find
currently 144,847 Wines and 22,903 Producers, including 2,432 classified producers.
Rating system Their sources in Wine Guide Wine Samples
Bookmark