The wine-growing history of this country is linked to that of the Moselle; this river forms the border with Germany over a length of 36 kilometres. To the east on the other bank lies the German wine-growing region of the Moselle. The Romans introduced viticulture to the entire area as early as the 1st century BC. In the Middle Ages, viticulture boomed with the founding of many monasteries. An extremely cold winter in 1709 almost completely destroyed the vineyards. After a decision at the Congress of Vienna in 1815, the Grand Duchy of Luxembourg had to cede all vineyards on the other side of the river. From 1880 onwards, there was a great upswing due to a customs agreement. The Luxembourg wines made from the Elbling variety (at that time 90% share) were mostly exported to Germany as base wine for sparkling wine or as blended wine. However, this came to an end after the First World War. 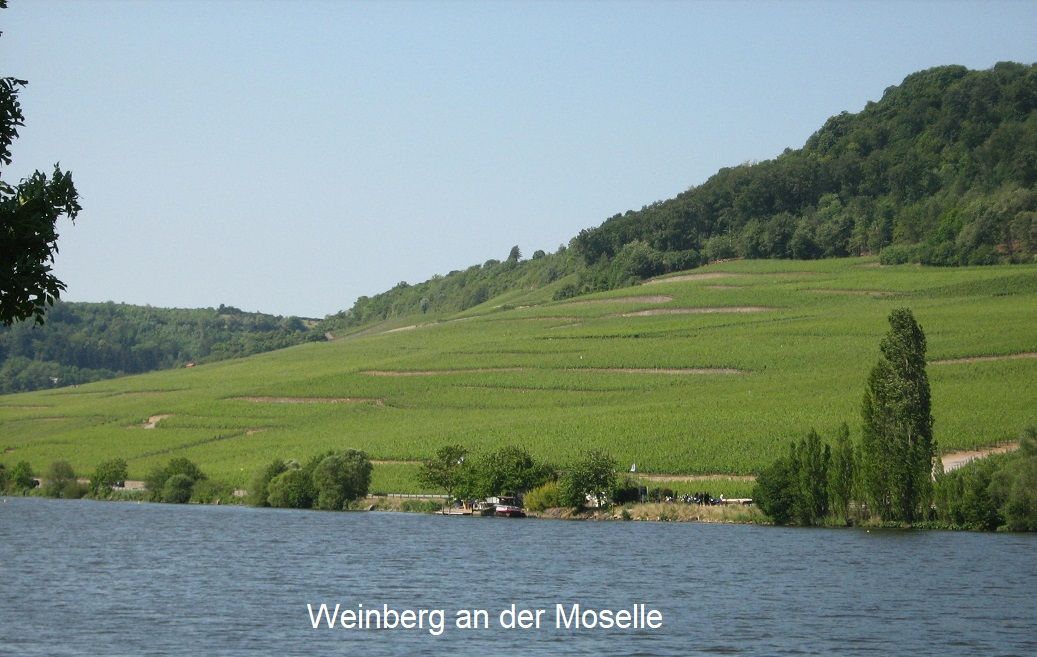 Climatically, the wine-growing regions are located on the northern edge of European viticulture. The vineyards, divided into about a hundred sites, range in width from 300 to 400 metres over 40 kilometres along the banks of the Moselle from Schengen to Wasserbillig. They are located in the eastern cantons of Remich (with the main communes of Remich, Schengen and Wintrange) on alluvial soils and Grevenmacher with limestone soils predominating here. The limestone soils are particularly well suited to Burgundy varieties. The cold temperatures cause longer ripening times and highly fluctuating yields. The high yield limits are 140 hl/ha for Rivaner and Elbling, and 120 hl/ha for the other varieties. The acidic Elbling is mainly made into Crémants. The vineyard area covers around 1,300 hectares, from which between 100,000 and 125,000 hectolitres of wine are produced annually. The grape variety index 2016 (Kym Anderson):

There is the comprehensive appellation designation "Moselle Luxembourgeoise" and, for sparkling wines produced according to the Champagne method, "Crémant de Luxembourg". In 1935, the "Marque Nationale des Vins Luxembourgeois" was introduced. The "Marque Nationale - Appellation Contrôlée" label guarantees state control of origin and quality on the basis of an analytical and sensory test according to a 20-point system with at least 12 points. With 14 points a wine reaches the category "Vin classé", with 16 points "Premier Cru" and with 18 points "Grand Premier Cru". The criteria introduced in 2001 for "Vendange Tardive"(late harvest), "Vin de Glace"(ice wine) and "Vin de Paille"(straw wine) are based on degrees of oechsle. The "Vins Barrique" are mostly wines made from Chardonnay. Mainly varietal white wines are produced, the grape variety is noted on the label along with the municipality and often also the location.

In just 20 years, the number of producers has dropped from 1,200 to less than 500, as many small estates have sold their land. "Les Domaines de Vinsmoselle" is an association of six winegrowers' cooperatives with 450 grape suppliers. In 1966, the "Organisation Professionnelle des Vignerons Indépendants (OPVI)" was founded with around 50 independent winegrowers. With the 2007 vintage, seven winegrowers from this circle founded the "Charter". They commit themselves to natural wine production with strict rules, such as renouncing enrichment and organic fertilisation, and limiting yields to a maximum of 60 hl/ha. This is about half of the legal requirements in Luxembourg

Sources of Purchase for Luxembourg 4