Set a new bookmark for the wines of Weingut Stift Klosterneuburg GmbH. The currently tasted wines then appear on your personal Wine Reviews homepage.
Only Members can bookmark

The winery in the town of Klosterneuburg is one of the oldest and most traditional wineries in Österreich. The origin of the monastery Klosterneuburg goes back to the Babenberg Margrave Leopold III. (...
More

The winery in the town of Klosterneuburg is one of the oldest and most traditional wineries in Austria. The origin of the monastery Klosterneuburg goes back to the Babenberg Margrave Leopold III. (1073-1136), who moved his residence to Klosterneuburg in 1113 and founded the monastery in 1114. In 1133, the ruler called the Augustinian canons to Klosterneuburg, who then developed the monastery over the centuries into a centre for religion, science, culture and also viticulture. Wine was already exported to many countries in the Middle Ages, was widely famous and the monastery was given the name "Zum rinnenden Zapfen" by the people. In 1330, a great fire broke out and destroyed half the town. The extinguishing water slowly ran out and the monks began to drag buckets of mass wine to the altar. The fire was finally extinguished with this precious water. When the Turks approached in 1683, 6,000 buckets of wine (about 360,000 litres) were brought from the Abbey cellar to safety in Bavaria. From 24 August, 13,000 Turks under Kara Mustapha (~1630-1683) laid siege to the city. Canon Wilhelm Lebsaft began to serve wine to the defenders. This motivated and strengthened them and they succeeded in repelling the attack. 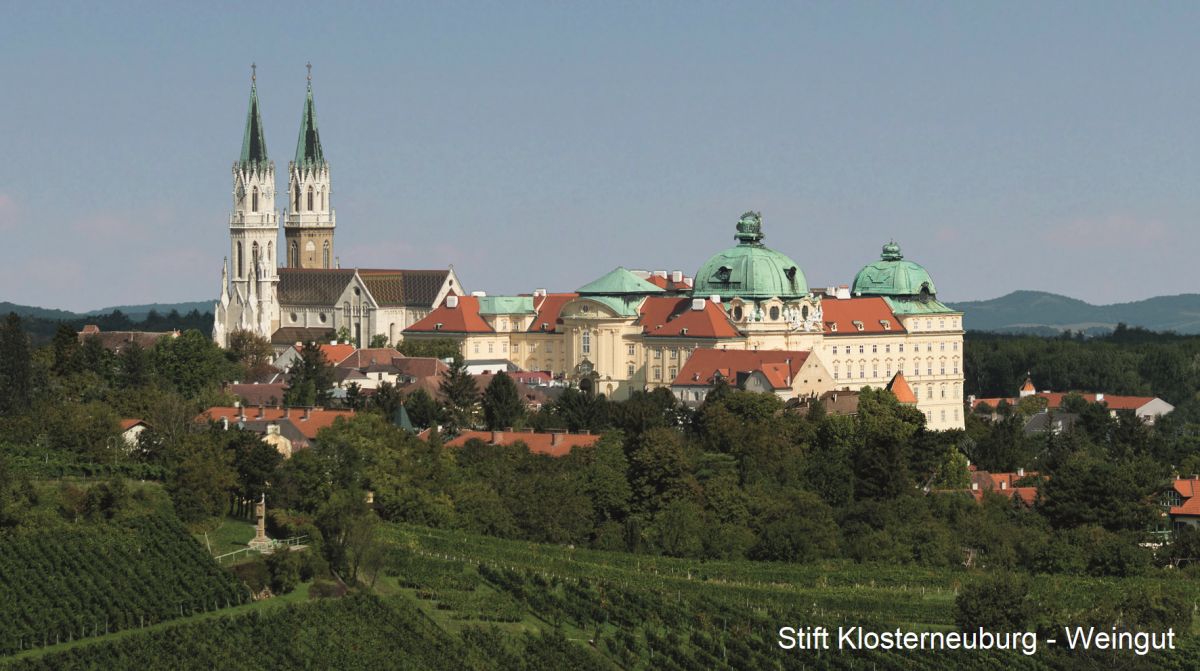 Due to the rigorous church reforms under the Habsburg Emperor Joseph II (1741-1790), Pope Pius VI (1717-1799) travelled to Wien in 1782 to negotiate with the Emperor about the withdrawal of these measures. On the way he also visited the monastery Klosterneuburg on 20 April and it is reported that the wine served pleased him. Emperor Napoleon (1769-1821) visited the monastery twice. On 2 December 1805 he defeated the Austrian and Russian troops in the Battle of the Three Emperors at Austerlitz. Afterwards, the French moved into Klosterneuburg. On 20 December Napoleon visited the wine cellar; he was served an "old Austrian". He praised it, saying that it was "not unlike Rhine wine". In 1809 Napoleon occupied Wien for the second time and before that moved back into Klosterneuburg.

His soldiers plundered exactly 8,241 buckets of the best wine from the Abbey cellar. They also tapped the famous "thousand bucket barrel", which had been used to hold the tithe wine since 1711. The French got drunk for days and drained the rest. After that, the barrel was never filled again, but only used for the famous barrel sliding. At that time, the monastery cultivated a total of 1,200 hectares of vineyards in Klosterneuburg alone. Today there are "only" about 100, mainly due to phylloxera, which struck relatively late in the 19th century in Klosterneuburg and destroyed many vineyards. At that time, wine was largely produced from the grape variety Österreichisch-Weiß (which is still cultivated in small quantities today). 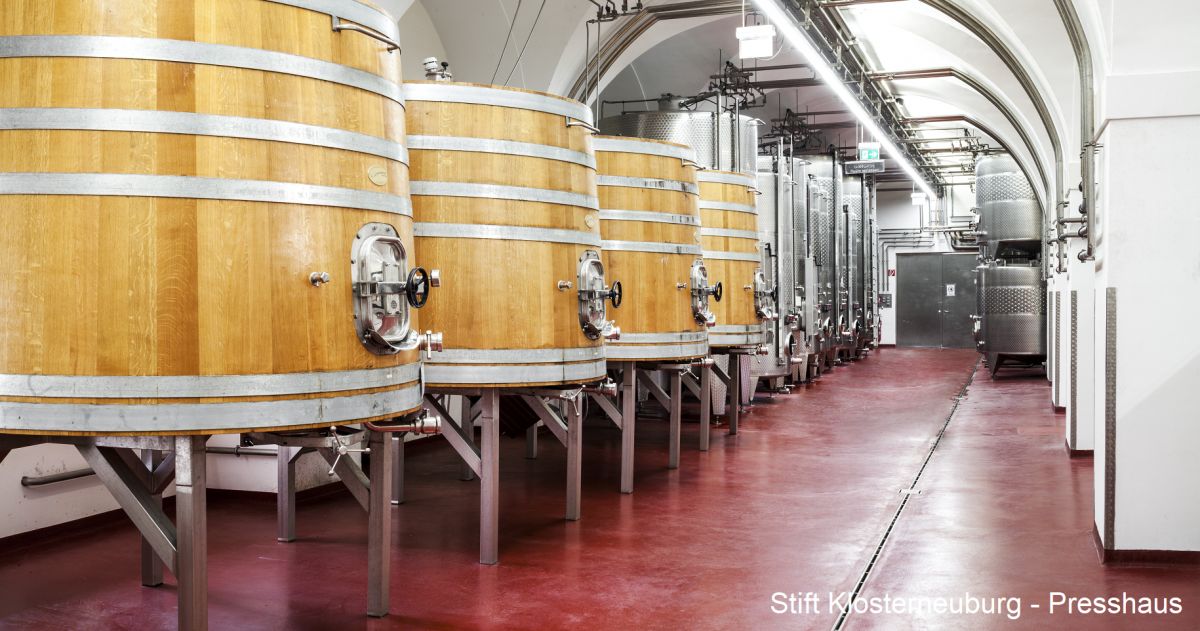 In 2014, on the occasion of the 900th anniversary, renowned wineries from all over the world were invited to a gala wine tasting. Among them were wineries from Germany(Schloss Johannisberg), Switzerland, Italy(Donnafugata), France, Portugal (Fonseca), Spain(Marqués de Riscal) and Oregon(HillCrest Winery). Today's winery Stift Klosterneuburg is owned by the Augustinian canons with the monastery provost Prelate Bernhard Backovsky as the largest private winery owner in Austria. The winery is run by managing director Dr. Wolfgang Hamm, who is assisted by cellar master Ing. Günther Gottfried and vineyard manager Johannes Steurer. The vineyards cover 108 hectares of vineyards in the municipalities of Klosterneuburg(Franzhauser, Steinriegel, Hengstberg, Ziegelgrub), the Kahlenberg village belonging to Wien (Altweingarten, Jungherrn, Nußberg, Raflerjoch), Gumpoldskirchen (Hofpoint, Wiegen) and Tattendorf(Stiftsbreite in sole ownership with 40 ha of St. Laurent). They are thus spread over the three wine-growing areas Thermenregion, Wagram and Wien scattered.

The red wine varieties St. Laur ent, Zweigelt, Pinot Noir, Blaufränkisch, Cabernet Sauvignon and Merlot are cultivated, as well as the white wine varieties Grüner Veltliner, Riesling, Chardonnay, Pinot Blanc, Traminer, Rotgipfler, Sauvignon Bl anc, Zierfandler, Neuburger and Welschriesling. In order to respond to the different sites and to achieve even higher quality, a special vineyard programme was developed. It consists of many targeted measures for soil vitalisation (cover crop, return of pomace), individual foliage care to increase biodiversity (species diversity), as well as research and preservation of old vine material. The monastery Klosterneuburg is the first winery to produce on a CO2-neutral basis and is thus considered a pioneer in climate protection. 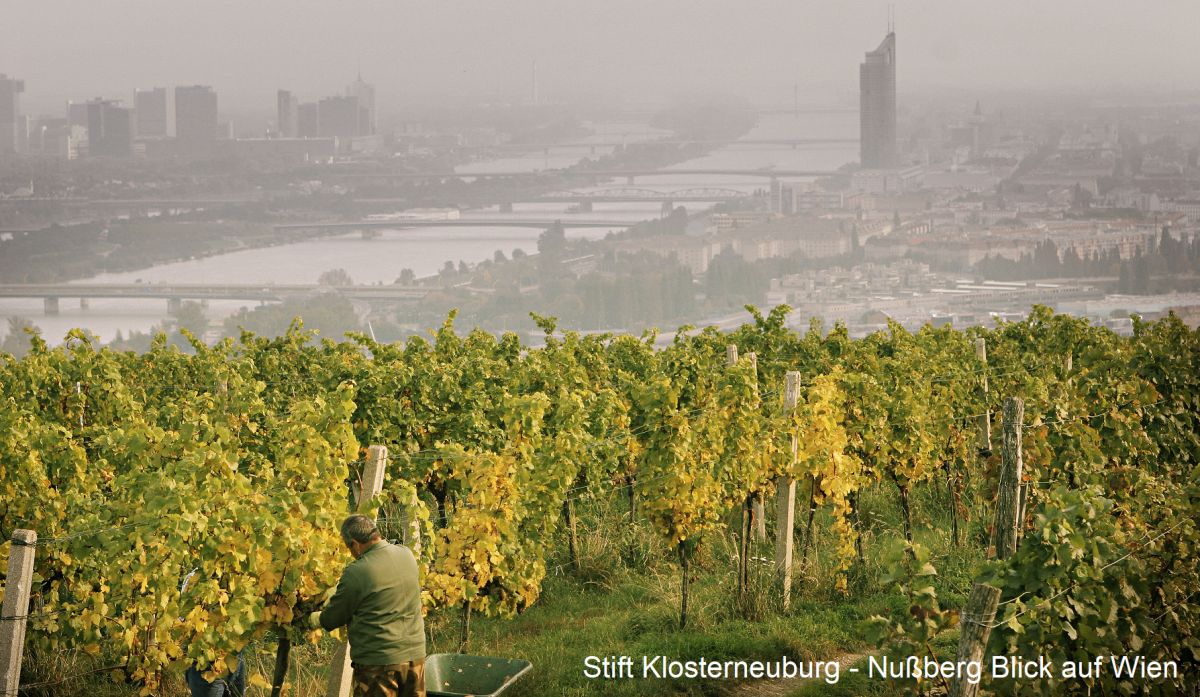 The wines are pressed and stored in the four-storey vaulted cellar built under Emperor Charles VI (1685-1740) up to 36 metres below the monastery square and with walls up to seven metres thick. In 2007, the newly established red wine processing plant and in 2008 a new bottling plant were put into operation. The vinification is precisely matched to the respective variety and colour. By means of computer-controlled fermentation, the white wines are fermented slowly and cool in order to emphasise the aromas and freshness typical of the variety. The red wines are fermented a little warmer to achieve optimal colour and tannin leaching.

The extensive product range comprises four lines. These are the "Lagenweine" (storable varietal wines and cuvées from top vineyards in different wine-growing regions, with a vine tendril on the label), the "Klassikweine"(fruit-driven, varietal-typical wines from one wine village, with the Abbey coat of arms on the label), "Pastellweine" (pastel wines with fruit-driven, regional and varietal-typical wines, only available in the food retail trade) and "Vom Schotter" (from barren limestone gravel soils and Danube gravel). The Abbey wines are sealed with screw caps, the white site wines with glass stopp ers and the red site wines with natural corks. 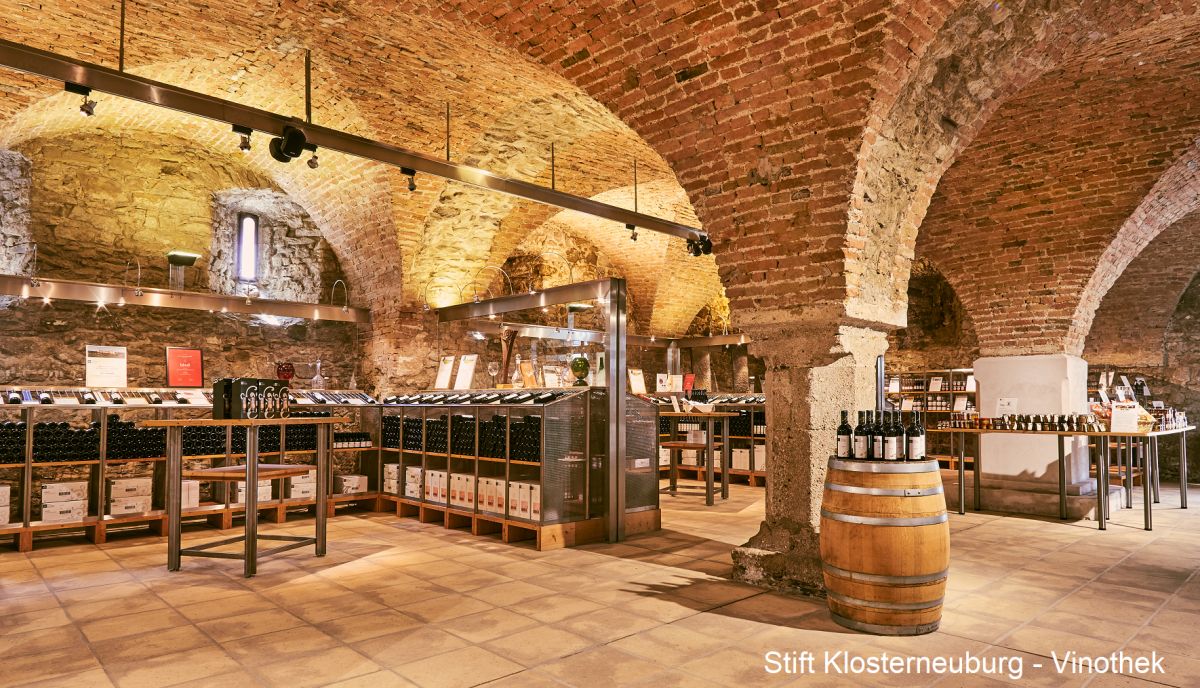 Weingut Stift Klosterneuburg GmbH Region: Wagram Lower Austria/Niederösterreich Austria
One of the best producers of the region
In this section you will find
currently 145,317 Wines and 22,930 Producers, including 2,442 classified producers.
Rating system Their sources in Wine Guide Wine Samples
Bookmark