Set a new bookmark for the wines of Weingut Schloss Vollrads. The currently tasted wines then appear on your personal Wine Reviews homepage.
Only Members can bookmark

The wines keep constant high level and are usually the best in their respective category in the area.
Learn more about how we rate

About Producer Weingut Schloss Vollrads, Oestrich-Winkel is a premium member of wein.plus The winery is located in the municipality of Oestrich-Winkel in the German Rheingau region of Rheingau. The castle was built by the dynasty of the Reichsfreiherren von Greiffenclau at the beginning of...
More

The winery is located in the municipality of Oestrich-Winkel in the German wine-growing region of Rheingau. The castle was built by the dynasty of the Reichsfreiherren von Greiffenclau at the beginning of the 14th century, and the name "Vollrads" is probably derived from a personal name already mentioned in 1268. The family tree of the Greiffenclau family can be traced back to the year 1097. Georg Philipp von Greiffenclau had the actual manor house built in 1684 next to the residential tower, which Johann Wolfgang von Goethe (1749-1832) found "whimsical" during his visit in 1814. The von Greiffenclau family produced many important personalities, including archbishops and electors of Mainz and Trier and prince bishops of Würzburg. Erwein Count Matuschka-Greiffenclau (1938-1997), the 27th scion of the dynasty, was president of the Rheingau Winegrowers' Association from 1990 to 1997. With his death, the almost 800-year family tradition of viticulture at Schloss Vollrads came to an end. In the period 1979 to 1997, the neighbouring Fürst Löwenstein wine estate was operated on a leasehold basis, which is now managed independently again. 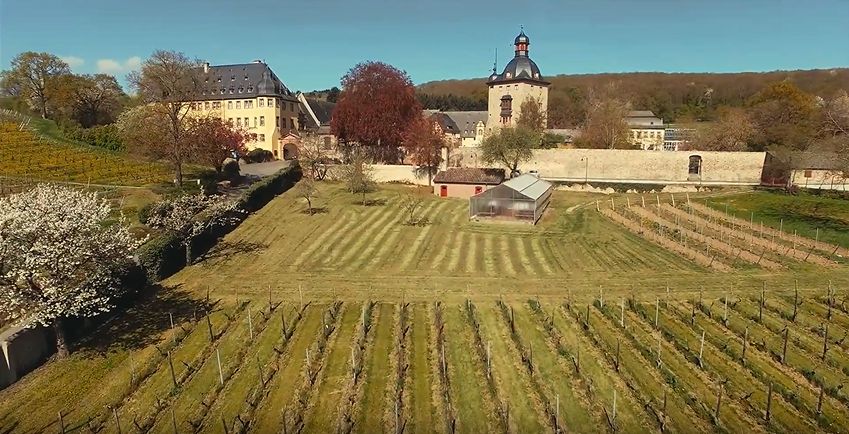 Today, Nassauische Sparkasse continues to run Schloss Vollrads and the vineyards as a historical unit. An estate restaurant is attached. Events are also organised on the themes of art, culture and wine. Ralf Bengel is the estate manager, Jochen Bug is the cellar master and Jochen Eberbach is responsible for the external operations. In 2001, eight hectares of vineyards were acquired from the Brentano estate administration, whereby these were adjacent parcels. At the same time, the rights to call the wine produced there "Goethewein" were acquired.

The vineyards cover a total of around 63 hectares of vineyards, 48 of which are located at single vineyard Schloss Vollrads with the vineyards Schlossberg and Greiffenberg (all names may be mentioned on the label ), Hasensprung (ex Brentano), as well as further areas in individual vineyards in the municipalities of Winkel, Geisenheim and Hattenheim. Only the Riesling variety is cultivated. The south-facing Schloss Vollrads vineyard lies at an altitude of 70 to 158 metres above sea level with a slope of 5 to 30% on deep loess soils interspersed with gravel, clay and quartzite. A special feature is the "Clos du Jardin" section enclosed by a wall. Here are individual vines planted by renowned commercial and gastronomic clients as well as importers. This project was launched in 2011 on the occasion of the 800th anniversary.

From 2019, the conversion to certified organic (ecological) viticulture took place from 2022. The selective grape harvest takes place in several rounds over many weeks, so that only physiologically ripe and healthy grapes are processed. Depending on the vintage, the product range includes 10 to 15 different Riesling wines, which are marketed according to the four-stage VDP classification model. Depending on the wine type, the wines are fermented and matured in stainless steel tanks or in large wooden barrels. In years with suitable weather conditions, Trockenbeerenauslesen and ice wines are also vinified. The bottles are closed exclusively with screw caps. Bottle-fermented sparkling wines and noble brandies (marc, brandy) are also produced. Many old vintages are stored in the treasure chamber, the oldest are over 100 years old. The winery is a founding member of the VDP (Association of German Prädikat Wine Estates).