Set a new bookmark for the wines of Weingut der Hochschule Geisenheim. The currently tasted wines then appear on your personal Wine Reviews homepage.
Only Members can bookmark

The "Geisenheim Research Institute" in the town of Geisenheim in the Rheingau region of Hesse was founded in 1872 by the German banker Freiherr Eduard von Lade (1817-1904) as the "Königlich Preußische...
More

The "Geisenheim Research Institute" in the town of Geisenheim in the Rheingau region of Hesse was founded in 1872 by the German banker Freiherr Eduard von Lade (1817-1904) as the "Königlich Preußische Lehranstalt für Obst- und Weinbau". The son of a wine merchant had acquired a considerable fortune with export, banking and arms business and retired in Geisenheim in 1861. He had a luxurious country estate built there in the classicist style called "Monrepos" (French for "my retirement home"), complete with extensive parkland near the banks of the Rhine, and from then on devoted himself to private interests, the most important of which included fruit growing and the cultivation of new fruit varieties. Several times he sent boxes of apples and pears to the Prussian King Wilhelm I (1797-1888) and the Imperial Chancellor Otto von Bismarck (1815-1898), together with a request to be allowed to found a "Pomological College" (Pomologie = Greek for the study of fruit growing) in Geisenheim, which he was finally allowed to do by decree.

With money from the reparations from the Franco-Prussian War of 1870/71, a site was purchased near the banks of the Rhine and buildings erected. The tasks of the institute were initially mainly in the fields of viticulture and pomology (the teaching of fruit growing), as well as the organisation of studies in horticulture and viticulture. The first four directors were Oswin Hüttig (1827-1889) from 1872 to 1874, Christian Arndts (1831-1888) from 1874 to 1879, Rudolf Goethe (1843-1911) from 1879 to 1903 and Julius Wortmann (1856-1925) from 1903 to 1921. The latter founded the first yeast pure-breeding station in 1894 and was intensively involved in plant pathology (diseases), plant physiology, fermentation phys iology and cellar management. Traditionally, great attention is paid to the breeding of new grape varieties.

Dr. Hermann Müller-Thurgau (1850-1927) worked at the Institute from 1867 to 1890 and laid the foundation for the grape variety named after him. Dr. Heinrich Birk (1898-1973) was the head of the institute's early ripening Riesling. Dr. Helmut Becker (1927-1989) was head of the vine breeding station from 1964 to 1989 and particularly promoted the breeding of new grape varieties. The breeding goals were yield security, fungal resistance (botrytis, powdery and downy mildew), good wood maturity and high wine quality. These included the new varieties Allegro, Arnsburger, Bolero, Ehrenbreitsteiner, Ehrenfelser, Dunkelfelder, Gutenborner, Hibernal, Müller-Thurgau, Osteiner, Primera, Prinzipal, Reichensteiner, Rotberger, Saphira and Schönburger. A special feature is that Geisenheim uses hereditary grapes of the Asian species Vitis amurensis (see Rondo). 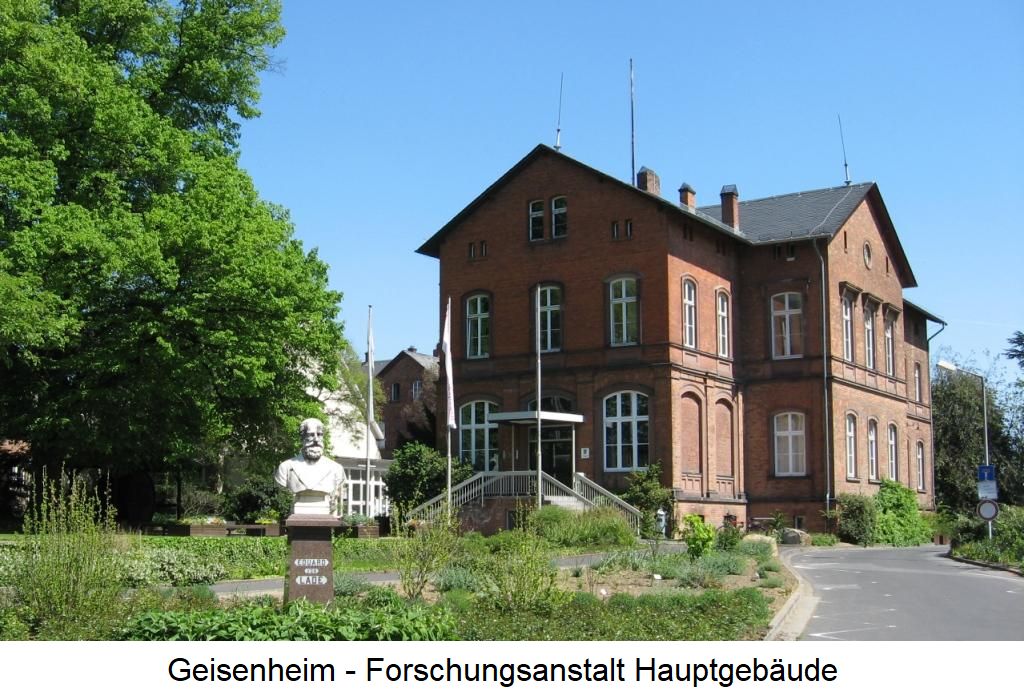 Today, the Geisenheim Research Institute carries out application and basic research in the fields of viticulture, horticulture, oenology and beverage research. As part of a close link with the RhineMain University of Applied Sciences, staff at the research institute in Geisenheim also help to supervise around 1,000 students in the fields of viticulture and oenology, beverage technology, horticulture and landscape architecture in lectures and tutorials at five institutes with a total of 14 subject areas. This is the only academic training in this field in the entire German-speaking area. There is also cooperation with the well-known English training institute WSET (Wine & Spirit Education Trust). The aim is to implement and offer innovative research for the practice in order to strengthen its competitiveness. See also BDO and Wine-Event Geisenheim.

A commercial winery is also run by the Geisenheim Research Institute. The vineyards cover 20 hectares of vines in the Rheingau single vineyard sites of Fuchsberg, Kitzberg, Kläuserweg, Mäuerchen and Rothenberg (Geisenheim), as well as Kirchenpfad and Magdalenenkreuz (Rüdesheim). More than 80% of them are planted with the white wine varieties Riesling, Müller-Thurgau, Pinot Blanc, Pinot Gris, Chardonnay, Gewürztraminer and Sauvignon Blanc, as well as with the red wine varieties Pinot Noir, Frühburgunder, St. Laurent, Merlot, Zweigelt, Regent, Gamaret and Garanoir. The wines are marketed in the lines Schoppenweine, Monrepos and Rieslings. Ice wines, bottle-fermented sparkling wines, various 'Edelbrände' (yeast, pomace, wine, fruit), liqueurs (nut) and fruit juices are also produced. The winery is a member of the VDP