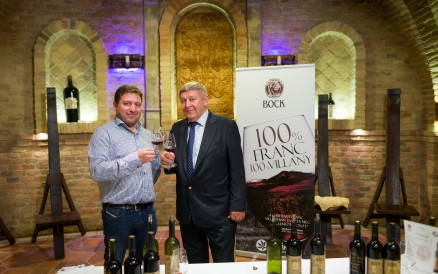 The headquarters of the traditional family winery is in Villány in the wine-growing region of the same name in the south of Ungarn. The ancestors of the family immigrated from Germany in the 18th cent...
More

Source of Supply List of sources where you can buy wines of Weingut Bock Borászat KFT.

Weingut Bock Borászat KFT., Villány is a premium member of wein.plus and thus supports this wine guide. Thank you!

Set a new bookmark for the wines of Weingut Bock Borászat KFT.. The currently tasted wines then appear on your personal Wine Reviews homepage.

The headquarters of the traditional family winery is in Villány in the wine-growing region of the same name in the south of Hungary. The ancestors of the family immigrated from Germany in the 18th century. The two-storey main cellar consists of several room cellars, two cellar branches of 30 and 100 metres in length and a round cellar known as the "Bock Chapel". This is used for weddings, ceremonies, concerts and events for 100 to 120 people. Guided tours of the cellar are available for visitors, showing all the phases of the winemaking process. The Hotel Ermitage and the Óbor Restaurant are connected to the winery. The cellar in the Vale of Tears has been owned by the Bock family since 1850. After expropriation in 1946, it was bought back by Antal Bock in 1958. Special crescences dating back to the 1981 vintage are stored here in small quantities. Since 1981, the company has been managed by József and Valéria Bock, now in the ninth generation. Their son Valér (cellar technology) and daughter Patrica (HR manager of the winery) also work in the company.

The company started with a vineyard of only half a hectare. Today, the vineyard area comprises 75 hectares in ownership as well as another integrated 70 hectares in the best locations of the Villány wine region (Jammer Valley, Ördögárok, Fekete-hegy, Bocor, Csillagvölgy, Kopár-dűlő). The red wine varieties Kék Portugizi(Blue Portuguese), Pinot Noir, Cabernet Franc, Cabernet Sauvignon, Merlot, Kékfrankos (), Kadarka and Syrah, and the white wine varieties Rajnai Rizling(Riesling), Olasz Rizling), Chardonnay and Hárslevelü are cultivated and processed. The cultivation is carried out according to the guidelines of an organic (ecological) viticulture.

After meticulous, selective harvesting, one million bottles of wine are produced annually using the most modern technology. The storage capacity is 1,400 barrique barrels, 35 large oak barrels (20 to 65 hl) and stainless steel fermentation and storage tanks with a capacity of more than 10,000 hectolitres. The premium wines are selections of the varieties Cabernet Franc, Cabernet Sauvignon, Kadarka, Kékfrankos, Pinot Noir and Syrah, and thus various cuvées called Royal, Bock, Libra and Capella. The flagship of the house is the "Magnifico", produced in outstanding vintages, which is made from 100% Merlot from the Ördögárok (Devil's Ditch) vineyard and aged for 24 months in new French barriques.