Famous Spanish sparkling wine house with headquarters in Sant Sadurní d'Anoia (province of Barcelona). It consists of several wineries or cellars with a total of 3,245 hectares of vineyards. The first...
More

Source of Supply List of sources where you can buy wines of Codorníu, S.A.

Codorníu, S.A., Esplugues de Llobregat is not a premium member of wein.plus yet.

Set a new bookmark for the wines of Codorníu, S.A.. The currently tasted wines then appear on your personal Wine Reviews homepage.

Famous Spanish sparkling wine house with headquarters in Sant Sadurní d'Anoia (province of Barcelona). It consists of several wineries or cellars with a total of 3,245 hectares of vineyards. The first winery was founded as early as 1551 by the Codorníu family in the town of Sant Sadurni d'Anoia, in what is now DO Penedès (Catalonia). In 1659, Maria Anna Codorníu married a Raventós, which is considered the founding year of the company. Anna was the last of the family to bear the name Codorníu. The direct descendant of José Raventós, after a trip to in the early 1870s, produced a sparkling wine using the Champagne method. He was not the first, as is often wrongly claimed, but he was the first to use today's standard varieties and, as head of the company, played a decisive role in the triumphal march of cava. 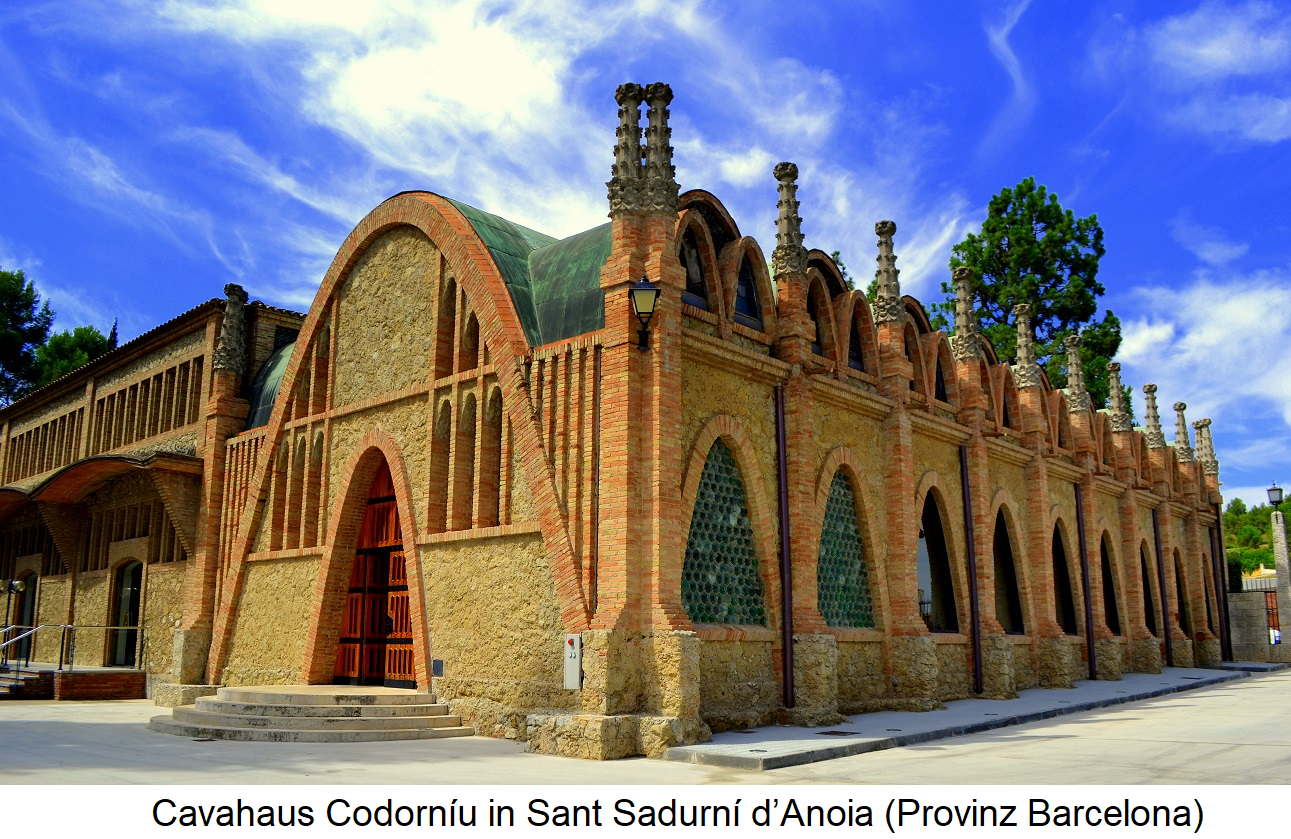 For a long time the sparkling wine was called Xampàn (Champán). Son Manuel Raventós took over the management of the company in 1885. Codorniú's sparkling wine was awarded a gold medal at the World Exhibition in Barcelona in 1888. From 1897 onwards, the company began exporting, and since that year the royal coat of arms may appear on the label. The five-storey winery, built in 1915 and listed as a historical monument since 1976, is located in the middle of a beautiful park and has a 30-kilometre-long labyrinth. The old bodega has been converted into a museum.

The standard cava of the house is produced from the three classic varieties Parellada, Macabeo and Xarello. In addition, cavas with Chardonnay content are also produced. These are "Codorníu 1551", "Anna de Codorníu" and the top Reserva "Jaume Codorníu". At the beginning of the 1990s, Codorníu managed to obtain approval for the Chardonnay variety in the face of vehement opposition from its major competitor Freixenet. In the 1970s, Codorníu used mechanical remuage (shaking) of the bottles using a gyro pallet for the first time. In 2001, 450 years of company history were celebrated. The Spanish King Juan Carlos I (born 1938) visited the Codorníu winery and put his autograph on the label of the bottle, which was given the name "Gran CAVIT Primato" and holds 26 litres. With almost 100 million bottles a year, the company is the second largest producer of cava after Freixenet. But it also produces large quantities of still wines.

Numerous other companies belong to the company. The famous Raïmat winery was founded by Manuel Raventós as early as 1914. The company also owns the Masía Bach and Rondel wineries in the Penedès area, the Bilbaínas winery in the Rioja Alta area, as well as its own vine cultivation research station. In 1992, the Codorníu Napa winery was opened in Los Carneros, California, where sparkling wines are produced.