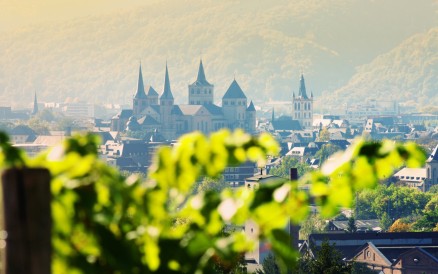 The "Bischöfliche Weingüter Trier" with its headquarters in Trier was created in 1966 through the merger of the previously independent wineries of the shareholders. The shareholders are the "Hohe Domk...
More

Set a new bookmark for the wines of Bischöfliche Weingüter Trier. The currently tasted wines then appear on your personal Wine Reviews homepage.

The "Bischöfliche Weingüter Trier" with its headquarters in Trier was created in 1966 through the merger of the previously independent wineries of the shareholders. The shareholders are the "Hohe Domkirche Trier" (founded 1851), the "Bischöfliches Priesterseminar Trier" (founded 1773) and the "Bischöfliches Konvikt Trier" (founded 1840). All three thus have an extremely long tradition in viticulture and were among the founding members of the Association of Natural Wine Auctioneers (today VDP), whose philosophy of that time of producing wines with "natural alcohol content" the Bischöfliche Weingüter Trier still feel committed to today. Dr. Karsten Weyand is the managing director of the winery. Johannes Becker is responsible for oenology; Klaus Backes and Stephan Bigus are the winery managers.

The Bischöfliche Weingüter Trier originally cultivated about 100 hectares of vineyards. Since 2003 the Friedrich-Wilhelm-Gymnasium has also been part of the estate. Together with about 130 hectares of vineyards on the Moselle, Saar and Ruwer, the wineries are represented in numerous top locations. On the Moselle these are for example pharmacy (Trittenheim), Domprobst and Himmelreich (Graach), Goldtröpfchen (Piesport), Treppchen (Erden), Würzgarten (Ürzig) as well as Matheisbildchen(Bernkastel). In the Saar region there are the individual sites Hofberg (Falkenstein), Altenberg (Kanzem), Kupp and Herrenberg (Ayl), as well as Kupp and Scharzhofberg (Wiltingen). And on the Ruwer these are the individual sites Marienholz (Eitelsbach), as well as Kehrnagel and Nies'chen (Kasel).

Top priority in the production of the wines is quality and character. This includes the preservation of traditional handicraft techniques (around 70% of the harvesting and selection is done by hand), sustainable viticulture and respect for nature and people. The grapes are pressed at the Scharzhof an der Saar and at the Duisburger Hof an der Ruwer. The wines are aged in the middle of Trier's city centre in the extensive cellar vaults dating back to Roman times. The Bischöfliche Weingüter Trier have made it their task to preserve the costly and labour-intensive steep-slope viticulture and to protect the associated wine cultural heritage along the three river valleys. According to their objectives, this is not only an important economic factor for the region, but also of immeasurable value internationally.

The main focus is on the Riesling with about 90%. The rest are the white wine varietiesPinot Blanc and Elbling as well as the red wine varietiesPinot Noir, Frühburgunder and St. Laurent. The quality hierarchy consists of the levels of the cathedral and slate collection as estate or varietal wines, local wines and single vineyard wines. Each level has its own label, for which a printing stone found in the cellar of the 1902 vintage of the Trier Episcopal Seminary served as a model for the local and single vineyard wines. The wines are aged in stainless steel or in traditional-classical style in 240 oak barrels as well as some double-piece barrels without the addition of pure yeast. High-quality Riesling wines and all Burgundy wines are always fermented and aged in Fuder or double-piece barrels and then bottled immediately before the next harvest. Some wines like Réserven and Spätburgunder are vinified much longer in Fuder and Doppelstück barrels. In suitable years also Beerenauslesen, Trockenbeerenauslesen and Eiswein are pressed. Traditionally bottle-fermented sparkling wines, e.g. Scharzhofberger, are also produced. Many old Riesling vintages are stored in the treasure chamber.

Bischöfliche Weingüter Trier Region: Germany Mosel Bernkastel
One of the best producers of the region
wein.plus Business Premium Member
In this section you will find
currently 144,156 Wines and 22,865 Producers, including 2,413 classified producers.
Rating system Their sources in Wine Guide Wine Samples
Bookmark