Set a new bookmark for the wines of Le Domaine Leroy. The currently tasted wines then appear on your personal Wine Reviews homepage.
Only Members can bookmark

Famous wine company with headquarters in the municipality of Meursault in the Burgundy region of Côte d’Or. The Négociant house Maison Leroy was founded in 1868 by François Leroy (?-1870) in the commu...
More

Famous wine company with headquarters in the municipality of Meursault in the Burgundy region of Côte d'Or. The Négociant house Maison Leroy was founded in 1868 by François Leroy (?-1870) in the commune of Auxey-ut Duresses. He also maintained business relations with the brandy producer Hugo Asbach (1868-1935). His grandson Henri Leroy (1894-?) expanded the estate with his own vineyard. In the 1930s he became a customer of the Domaine de la Romanée-Conti and later a friend of the co-owner Edmond Gaudin de Villaine. When the winery ran into financial difficulties in the early 1940s, Henri Leroy bought Jacques Chambon's share in 1942 and became second managing director in 1950. He also kept his trading company Leroy S.A. which took over the exclusive distribution of DRC wines. His daughter Lalou Bize-Leroy took over the DCRC management together with Aubert de Villaine (*1939). 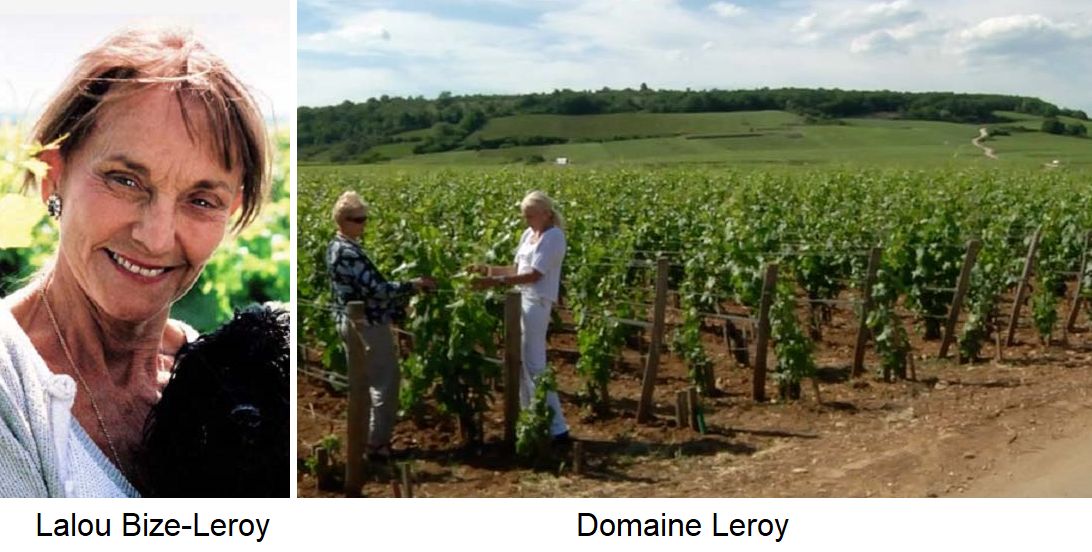 In 1988, Lalou bought the run-down Charles Noëllat vineyard and the Domaine Philippe Remy for 65 million francs. To finance the purchase, one third of the shares of the trading company Leroy S.A. were sold. Its involvement in two wineries was attributed to it as a conflict of interest. This and other long-standing disputes led to a break in the business relationship in 1992. Lalou Bize-Leroy left the DRC and devoted herself to the new Domaine Leroy winery. The vineyards now cover 22.5 hectares of vines in the famous Burgundy communes of Aloxe-Corton, Chambolle-Musigny, Gevrey-Chambertin, Morey-Saint-Denis, Pommard, Savigny-lès-Beaune, Vosne-Romanée and Vougeot. These are the Grands Crus Chambertin, Clos de la Roche, Corton-Charlemagne (white), Clos de Vougeot, Corton-Renardes, Latricières-Chambertin, Musigny, Richebourg and Romanée-Saint-Vivant, and many Premiers Crus.

Since the early 1990s Madame Bize-Leroy has been an uncompromising representative of biodynamic viticulture. She was inspired to do so by a visit to the famous winemaker Nicolas Joly at his estate Château de la Roche-aux-Moines (Loire), which is uncompromisingly biodynamically cultivated. As a result, she suddenly changed her business within a very short time. Among other things, this means avoiding the use of chemical fertilizers and pest control, and consistently observing the phases of the moon in all work in the vineyard. Yields are kept extremely low by rigorous pruning with a maximum of 20 hl/ha. In many plots the vines are between 50 and 80 years old.

This results in wines of outstanding quality in often very small quantities of only two to three barrels. Most of them mature for 18 months in new oak barrels, but due to the natural very high concentration this still does not lead to an overemphasis of the oak spice. Usually no fining and no filtration is done before bottling. These Kreszenzen are among the most expensive wines in the world due to the elaborate vinification. The wines of the family estate Domaine d'Auvenay with vineyards in the Grands Crus Bonnes-Mares, Chevalier-Montrachet and Mazis-Chambertin are specially vinified under this label.