Moet & Chandon, Epernay is not a Premium Member of wein.plus yet

Set a new bookmark for the wines of Moet & Chandon. The currently tasted wines then appear on your personal Wine Reviews homepage.

The largest champagne production and trading house in the world with over 30 million bottles of champagne produced per year. This quantity means that every second somewhere on earth a bottle of the company is uncorked. Every fourth bottle of champagne comes from the company, the market share in the USA is 50%. The company was founded in Épernay in 1743 by Claude Moët (1683-1760), who inherited some vineyards and started producing champagne. He was acquainted with Pierre Pérignon (1639-1715), with whose abbey, where this famous monk worked, the company would later enter into a special relationship. The family had been active in the wine trade in Champagne since the 14th century. 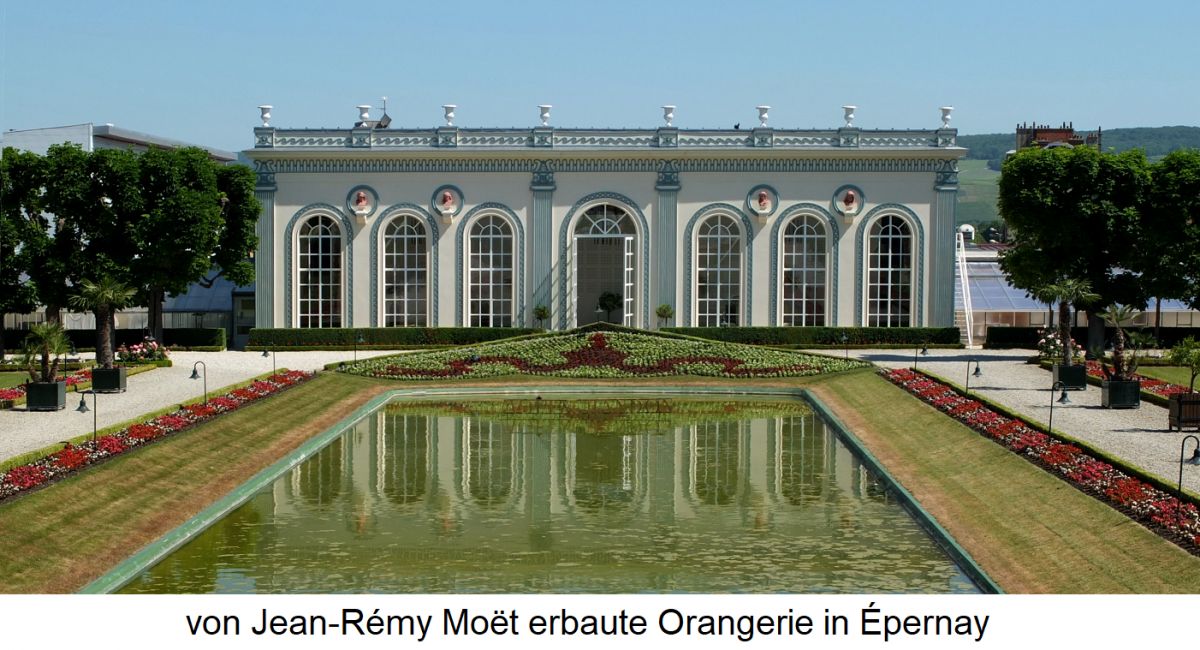 The founding son Claude-Louis Nicolas Moët (1719-1792) delivered his champagne to the table of King Louis XV (1710-1774). His mistress Madame Pompadour (1721-1764) said: "Champagne is the only drink that makes women more beautiful the more they drink it". The founder grandson Jean-Rémy Moët (1758-1841) already exported his champagne all over the world. He was a close friend of Napoleon (1769-1821), which was very beneficial to business ventures. In the early 1830s, he acquired the abbey of Saint-Pierre d'Hautvillers, where the monk Pierre Pérignon had lived in the 17th and early 18th centuries. The buildings were converted into a museum with replicas of Pérignon's cell and laboratory. In 1833, he handed over the business to his son Victor Moët and his son-in-law Pierre-Gabriel Chandon (1778-1850). Since then, the company has traded under the name of Moët et Chandon. 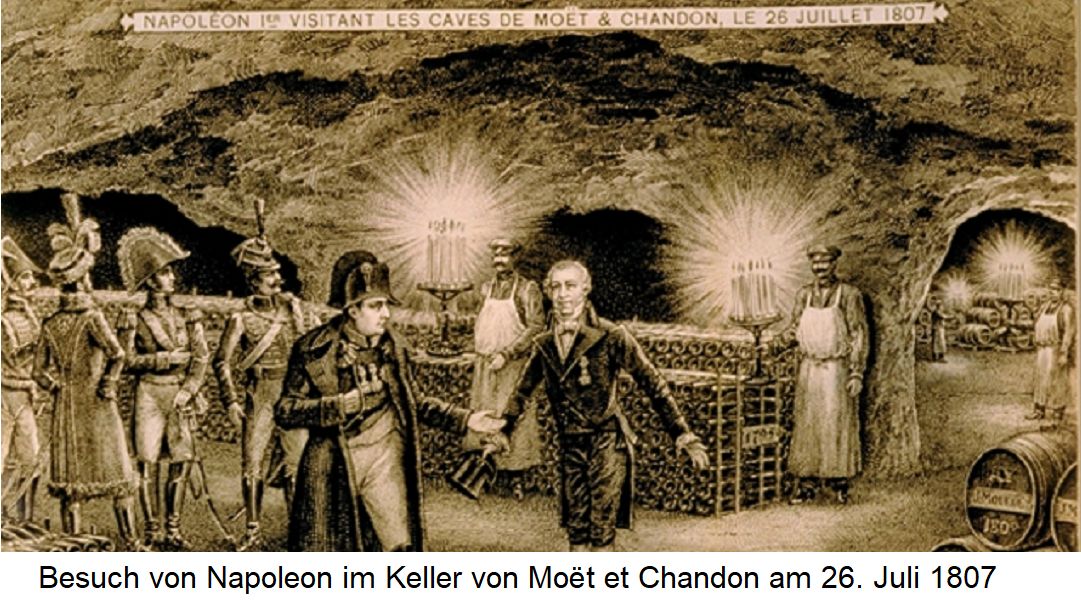 From the 1960s, a number of old champagne companies were taken over, Ruinart in 1962, Mercier in 1970 and Krug in 1999. The Champagne estate comprises 1,300 hectares, which provide about a quarter of the harvest. The large remainder comes from many winegrowers, most of whom have been associated with the house for generations. The wines are stored and mature in the chalk cellars with a total length of 110 km, which even have their own "street names" for better orientation. The standard brand is the "Brut Impérial" created in 1869 from Pinot Noir, Pinot Meunier and Chardonnay, which is assembled from 100 wines. The brand is produced in many bottle sizes (see picture). The production of the historical brand "White Star" was stopped in 2009. This brand became famous during a ship christening in 1902 during the "Champagne war Moët et Chandon vs. Other brands are "Brut Rosé", "Vintage", Nectar Impérial" and "Ice Impérial".

The most famous brand, which is considered the best champagne ever, is the Cuvée de Prestige "Dom Pérignon", created in 1936 and named after the monk. The brand name was previously owned by Mercier, but never used and sold to Moët et Chandon in 1930. In 1970, as already mentioned, Mercier itself was also taken over. A "Dom Pérignon Rosé" was first produced in 1959 with only 306 bottles, these rare examples are among the most expensive wines in the world. It is produced from Pinot Noir and Chardonnay. The grapes come from Grand-Cru sites as well as, to a lesser extent (in homage to Dom Pierre) from the vineyards of the former abbey of Hautvillers. In special years there is also a vintage. The absolute best Dom Pérignon is the "Oenothèque", which is aged longer on the yeast or disgorged much later than the other champagnes. Hollywood integrates Dom Pérignon again and again in films, among others in the James Bond film "Goldfinger" (1963). In an episode of the TV series "Star Trek" the USS Enterprise (NCC-1701B) was christened with a futuristic "Dom Pérignon" of the year 2265 (see in the picture above left).

In Argentina, the "Bodega Chandon" with more than 1,300 ha was founded in Agrelo (Mendoza) in 1959. In 1971 a merger with the cognac house Hennessy took place and in 1973 the perfume empire Christian Dior was acquired. Finally, in 1987, the entire Moët et Chandon company was taken over by the LVMH Group (Louis Vuitton Moët Hennessy). The annual production volume of all LVMH champagne brands is 68 million bottles.