Set a new bookmark for the wines of Château Margaux. The currently tasted wines then appear on your personal Wine Reviews homepage.
Only Members can bookmark

The winery is located in the commune of Margaux in the area of the same name in the Médoc (Haut-Médoc, Bordeaux). Its origins go back to an estate called "La Mothe de Margaux" owned by the Albret fami...
More

The winery is located in the commune of Margaux in the area of the same name in the Médoc (Haut-Médoc, Bordeaux). Its origins go back to an estate called "La Mothe de Margaux" owned by the Albret family in the 12th century. After several changes of ownership, the Lestonnac family gave the estate its current size with 260 hectares of land with gardens and magnificent avenues of plane trees. In 1802 it was acquired by Bertrand Douat Marquis de La Colonilla (1742-1816), who had the old Gothic manor house demolished and the Château built. In 1977, the estate was bought from the previous owner Pierre Ginestet by the naturalised Greek André Mentzelopoulos for 72 million francs (9.15 million euros). The new owner invested at least the same amount again in a new underground cellar, as well as vineyards, gardens, buildings and facilities.

With the support of the famous oenologist Professor Émile Peynaud (1912-2004), profound changes were made, which, after a lean period of more than a decade with rather average wines, already had an effect on the excellent and outstanding vintage of 1978. After the death of the owner in 1980, the listed company was continued by his daughter Corinne as CEO. However, the former Fiat boss Giovanni Agnelli owned the majority of the shares (75%). After his death in January 2003, the Agnelli heirs sold the stake, with Microsoft boss Bill Gates also mentioned as an interested party. Finally, Corinne Mentzelopoulos took over all Agnelli shares and is now the sole shareholder. Paul Pontallier has been in charge as general manager since 1983. 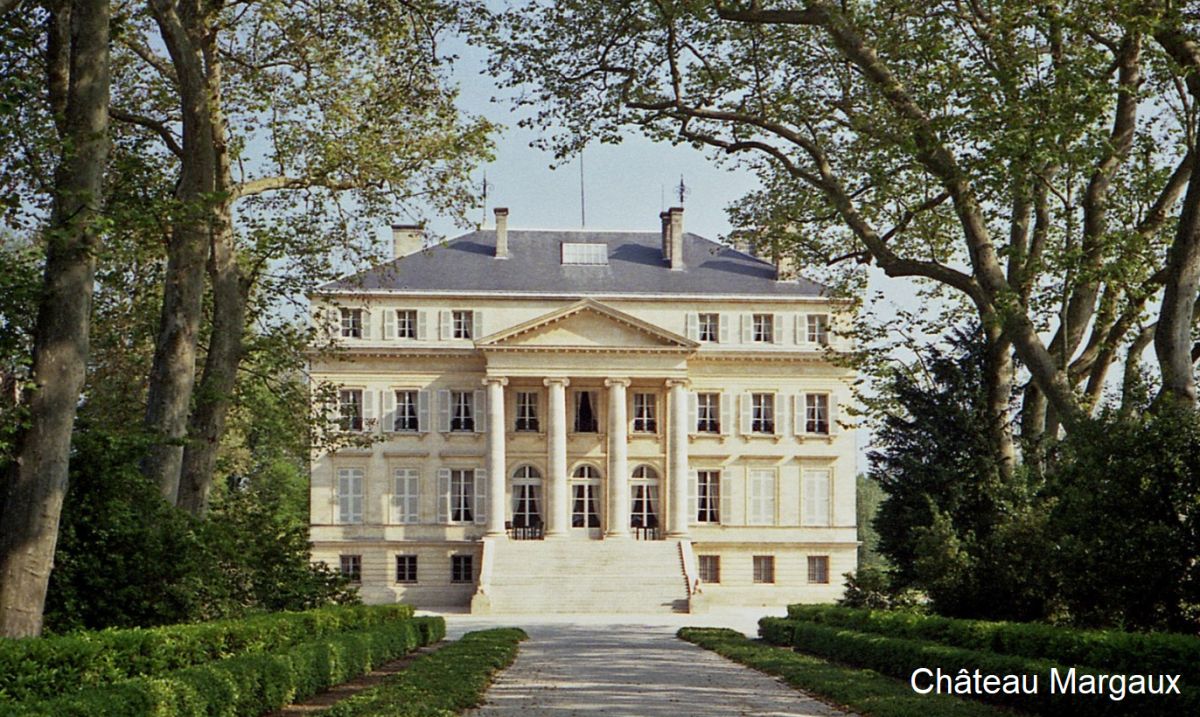 Several bottles of the 1787 vintage were in the possession of US President Thomas Jefferson (1743-1826), who was US ambassador to France at the time. One of them was tasted in 1987 by the famous wine writer Michael Broadbent (1927-2020) and judged as follows: "Bouquet of great richness and depth with lively, full flavour and perfect finish". Wine merchant William Sokolin (1930-2015) hosted an exquisite dinner at New York's Four Seasons restaurant in 1989, at which a Château Margaux from (allegedly) Jefferson's estate was to be sold with media attention for the hefty price of $500,000. But before it could be sold, it was broken through carelessness. Fortunately, the bottle was insured and the insurance company allegedly paid $225,000, making it one of the most expensive(never consumed) wine bottles in the world. The US actress and model Margot Louise Hemingway (1954-1996) was the granddaughter of the famous writer and winner of the Nobel Prize for Literature, Ernest Hemingway (1899-1961), who prized red wine from Margaux. After learning that she was named after the wine from Château Margaux that her parents had drunk on the night of her birth, she changed the spelling of her first name from "Margot" to "Margaux".