Set a new bookmark for the wines of Antinori Marchesi. The currently tasted wines then appear on your personal Wine Reviews homepage.
Only Members can bookmark

Where to buy wines of Antinori Marchesi?

About Producer Antinori Marchesi, Firenze is not a Premium Member of wein.plus yet

The famous Italian noble family in Toskana has been dedicated to viticulture for 26 generations. The family is one of the largest and most important wine producers and trading houses in Italien. The f...
More

The famous Italian noble family in Tuscany has been dedicated to viticulture for 26 generations. The family is one of the largest and most important wine producers and trading houses in Italy. The founder was Giovanni di Piero Antinori in 1385, whose lifetime also includes the rise of the Medici family in Florence. He came from a Florentine merchant family with a long winemaking tradition. At that time, the city had gone through a long period of warlike turmoil and several waves of plague. Wine production, together with the silk trade and international banking, formed the third pillar of the family's activities. Niccolò di Tommaso Antinori acquired the Renaissance palace on the Piazza degli Antinori, built in 1469, in 1506. Subsequently, vineyards and small estates were acquired in Tuscany.

In1898, the two brothers Piero and Ludovico Antinori, together with their brother-in-law Guglielmo Guerrini, founded the present Marchesi Antinori company, originally under the name Marchesi L&P Antinori, with the aim of "creating a little order among the various viticultural activities built up since the 14th century by the previous generations of Antinori". On a trip to Champagne in 1905, Lucien Charlemagne (one of the Chefs de Caves) was engaged to create the house's first sparkling wine using the méthode traditionnelle. A next milestone was the Chianti "Villa Antinori" in 1928, vinified with a long-lasting style that was new in Tuscany at the time.

Niccolò Antinori laid the foundation for the highest quality Chianti and Orvieto wines and successfully expanded the company despite the turmoil of the Second World War (1939-1945). In 1966, his son Marchese Piero Antinori (*1938) took over the management. He is regarded as the leading figure of the oenological revolution in Italy, also in connection with the so-called Super Tuscans, who had a significant influence on the quality of Italian wines. Among many other innovations, he was one of the first to experiment with barrique ageing. In 1961, he hired the young oenologist Giacomo Tachis (1933-2016), who already gained legendary fame during his lifetime. He gave the impetus for the use of the Cabernet Sauvignon grape variety in the Chianti region. He was succeeded by Renzo Cotarella in 1993. 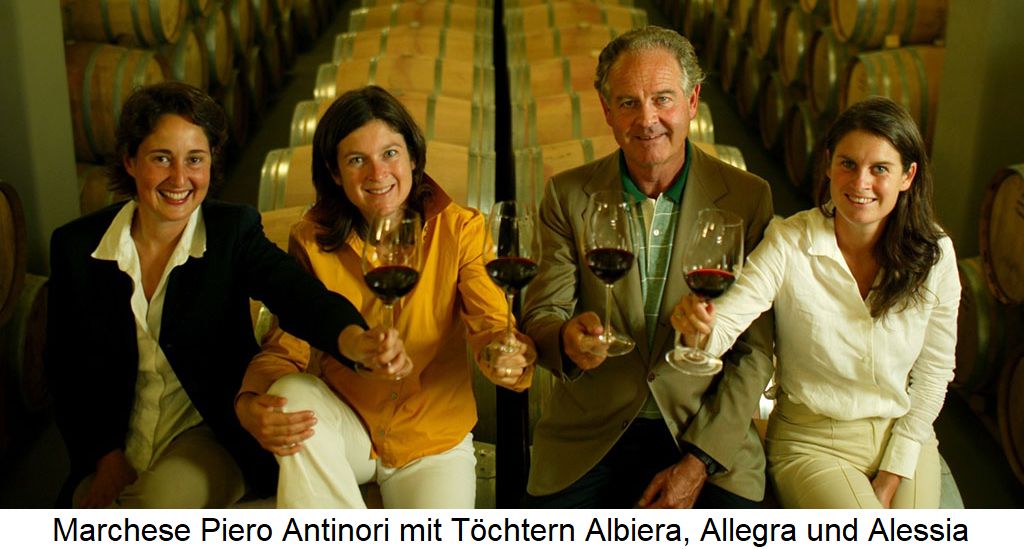 In 1966, persistent downpours caused a major disaster. The waters of the Arno overflowed into the Antinori wine cellars. A large quantity of wine was also destroyed. This was the reason to completely renovate the house. The French oenologist Émile Peynaud (1912-2004) was hired as a consultant and introduced temperature-controlled stainless steel tanks. In 1971, the later famous Tignanello was created, modelled on the Sassicaia produced by Piero's uncle Nicolò Incisa. The two wines are considered the beginning of the Super Tuscan era.

The three daughters Albiera, Allegra and Alessia follow the family tradition and are active in the company in various functions. They have taken over the operational business from their father. Today, the family empire comprises a total of 16 wineries in Italy and 7 abroad. These are wineries and cellars in Apulia, Piedmont, Tuscany and Umbria as well as in California. The total vineyard area is just under 3,000 hectares, 2,200 of which are in Italy. However, the total estate is much larger. On some estates, olive oil is produced in addition to wine. The property also includes the restaurants "Cantinetta Antinori" in Florence, Zurich, Wien, Moscow and Montecarlo as well as "Procacci" in Florence. The Antinori company is a member of the renowned family wineries association PFV (Primum Familiae Vini).

The winery Tenuta Tignanello was bought in the middle of the 19th century by a collateral line of the famous Medici dynasty and is situated in the heart of Chianti-Classico, 30 kilometres south of Florence. The two top vineyards are called Tignanello (57 ha in open south-eastern exposure) and Solaia (20 ha adjacent to it). The "Bottega Cantina Antinori" headquarters in Bargino, which was completed in 2012 on the highway from Florence to Siena, is considered a landmark of the region. The cellar in Bargino produces the "Villa Antinori Chianti Classico Riserva", the "Chianti Classico Peppoli", and the "Vin Santo del Chianti Classico".

Five kilometres north of Tignanello lies Tenuta di Pèppoli, acquired in 1985 on the occasion of the 600th anniversary of the Antinori family. The vineyards cover 50 hectares and are mainly planted with Sangiovese, as well as small amounts of Syrah, Merlot and Malvasia Bianca Lunga. Olive oil is also produced here. The third mainstay in Chianti Classico is the Badia a Passignano vineyard, three kilometres south of Tignanello. Saint Giovanni Gualberto founded the Vallombrosan Order here in 1049, a branch of the Benedictines who specialised in viticulture and forestry. A fossil Vitis vinifera was found here in 1983. Of the 223 hectares, 65 are used for viticulture and are mainly planted with Sangiovese. The "Chianti Classico Gran Selezione Badia a Passignano" is produced here.

The Guado al Tasso (badger's ford) estate is located near Bolgheri on the Tuscan coast and covers 320 hectares of vineyards. It produces the red wine named after the estate (a cuvée of Cabernet Sauvignon, Cabernet Franc and sometimes a small amount of Petit Verdot ), the rosé "Scalabrone" and the white wine "Vermentino". In the immediate vicinity is the estate Ornellaiawhich used to belong to Lodovico Antinori (younger brother of Piero Antinori). And also not far away is the Biserno estate, the first joint project of the Antinori brothers, under the direction of Lodovico.

The La Braccesca winery, acquired in 1990, is located in Montepulciano. The vineyards cover 340 hectares. Among other things, a Vino Nobile di Montepulciano, the Rosso di Montepulciano "Sabazio", as well as the two Syrah "Achelo" and "Bramasole" are produced here. Near Cortona is the Santa Cristina estate, where wines are produced under this brand. In Montalcino is the Pian delle Vigne winery, acquired in 1995 and named after a railway station, with a Brunello di Montalcino and the Riserva "Vignaferrovia". In the very south of Tuscany, in the Maremma, are the Fattoria Aldobrandesca near Sovana and the Le Mortelle winery.

Wineries in Umbria, Piedmont and Apulia

The Castello della Sala estate, named after the medieval castle near the town of Orvieto in Umbria, was purchased in 1940. On the extensive vineyards with 160 hectares of vines, the varieties Procanico, Grechetto, Chardonnay, Sauvignon Blanc, Sémillon, Pinot Bianco (Pinot Blanc), Viognier, Traminer, Riesling and Pinot Nero (Pinot Noir) are cultivated. The white wine "Cervaro della Sala" is produced here. Other wineries are Prunotto (Piedmont), Tormaresca with the two wineries Tenuta Bocca di Lupo and Masseria Maìme (Apulia) and Montenisa with a sparkling wine Franciacorta (Lombardy).