Unfortunately there is no information about Wiener Gemischter Satz DAC available.

The capital of Austria is also one of the nine federal states and, with around 1.9 million inhabitants, the most populous and, at 415 square kilometres, the largest city in the country. Until 1986, Wien was also the capital of Lower Austria, the largest province in the east, when it was replaced by St. Pölten. The Danube flows through the city from north to south-east over a length of more than 20 kilometres. With over 600 hectares of vineyards, Wien is the city with the largest wine production worldwide. 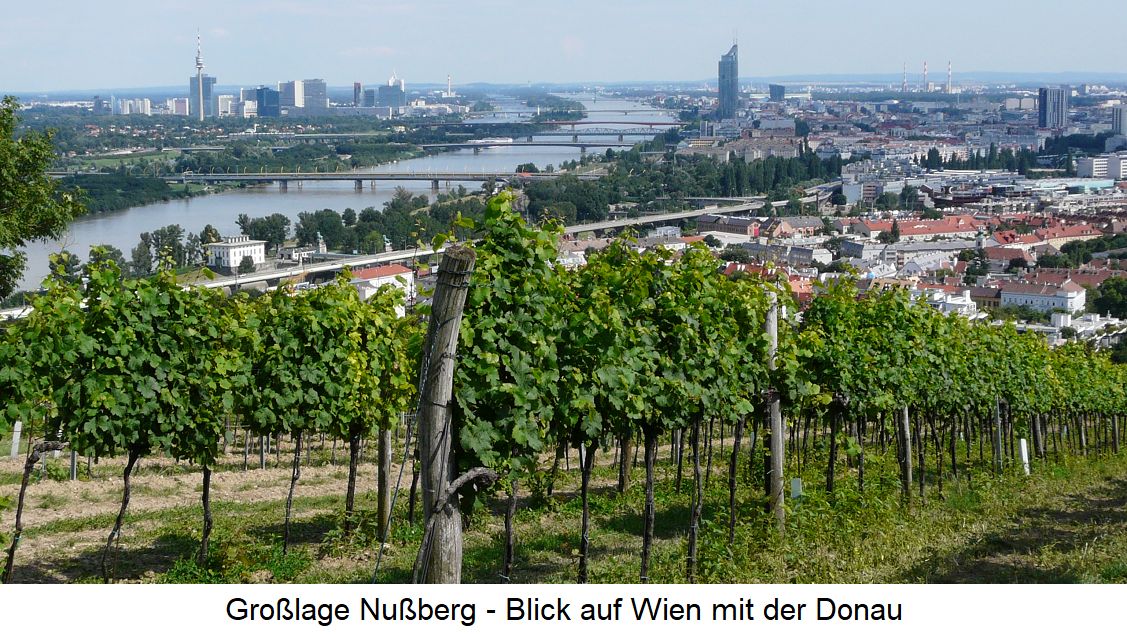 Even in the late Middle Ages, the largest parts of what later became Vienna's 21 districts were full of many vineyards, also in today's core area of the city within the so-called belt with districts from one to nine. There are documents attesting to vineyards in the present-day districts or boroughs of Stadtpark, Minoritenplatz, Rennweg, Alserbach, Alsegg, Matzleinsdorf, Linke Wienzeile, Weißgerberlände, Landstraße, Wieden and Mariahilf. Throughout the Middle Ages, viticulture was one of the main sources of income in Wien and many Viennese lived directly and indirectly from it. Even in the early Middle Ages, the innkeeping trade was considered a lucrative business and there is documentary evidence of wine tavern names from the 14th century.

From the middle of the 14th century, exports began to flourish and Viennese wine was sold to the Holy Roman Empire (Germany), Poland and Bohemia. At the beginning of the 15th century, vineyards in Wien and the surrounding area grew rapidly and almost completely displaced arable farming. Therefore, in 1426, Duke Albrecht V forbade the planting of new vineyards in order to secure the city's food supply. Emperor Ferdinand I. (1503-1564) designated wine as the first food of the cit Wieny in a city charter . The wine book by the clergyman Johann Rasch (1540-1612) describes in detail viticulture, wines, vineyard cultivation, cellar techniques and also drinking culture in this period.

Emperor Ferdinand III. (1608-1657) financed the defence of Vienna against the siege of the Swedes during the Thirty Years' War (1618-1648) with wine, so to speak, by introducing a special wine tax of one groschen per stored bucket of wine in 1639. It was successful in repelling the Swedes. The captured Swedes were given a glass of the taxed wine as a mockery, which was called "Swedish wine". The best wines were stored in the three-storey imperial and royal court cellar deep below the castle. Hofkeller deep under the castle. The then Emperor Leopold I. (1640-1705) commissioned the construction of a giant barrel with a volume of 5,050 buckets, which was 285,000 litres of wine. A wine history of Vienna would be incomplete without mentioning the famous balladeer Lieber Augustin (lived in the 17th century). Worth reporting is the year 1443, when the wine was so extreme acid that allegedly even the tyres of the barrels were attacked. In the Viennese vernacular, which has always known how to "get to the heart of things", the term " Reifbeißer " was therefore created.

Wien is both a generic and specific wine-growing region. Together with Lower Austria and Burgenland, it forms the winegrowing region Weinland. Around 500 winegrowers cultivate vines mainly in the west and north of the city. There are vineyards in 9 of Vienna's 23 districts, namely in 1010 Innere Stadt, 1100 Favoriten, 1130 Hietzing, 1160 Ottakring, 1170 Hernals, 1190 Döbling, 1210 Floridsdorf, 1220 Donaustadt and 1230 Liesing. The majority of the 145 vineyards are located in Döbling (86 with over 300 hectares of vineyards ), Floridsdorf (33) and Liesing (11). An initiative Lagenklassifizierung (vineyard classification) was launched by the Winzervereinigung WienWein in 2017. The vineyards of the city Wien are divided into five major sites: 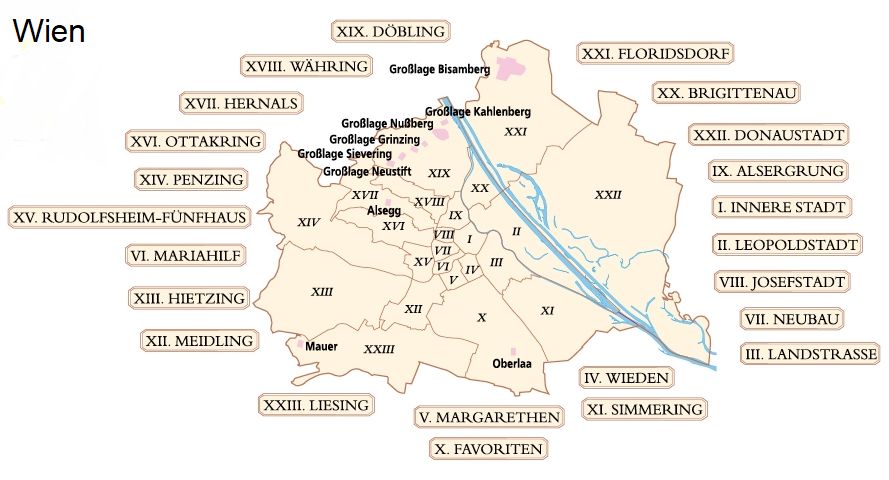 A provincial law that came into effect in 2015 now stipulates that Vienna's vineyards must be managed; this means that they are, so to speak, under monument protection. All cultivators or property owners of Viennese vineyards are obliged to use them for viticultural purposes. Even areas that were cleared after the law came into force must be replanted after eight years at the latest. The winegrowers of the WienWein association had campaigned for this. In the past, Vienna's vineyards were always threatened by real estate speculation, because existing zoning and development plans offered too little protection. The law put an end to that.

A curiosity is the smallest vine yard in Vienna with only 75 vines on about 170 m² in a front garden of the Ringstrasse palace "Wiener von Welten" at Schwarzenbergplatz 2 in the 1st district. It was planted around 1900 by a caretaker from Transylvania. Every autumn, the first grapes are harvested by the Viennese mayor with media attention. The vinification is done by the Mayer winery on Pfarrplatz in Döbling. The harvest yields about 50 to 60 bottles of Gemischter Satz (mainly Grüner Veltliner), which are auctioned off in December on the occasion of the humanitarian campaign "Licht ins Dunkel". 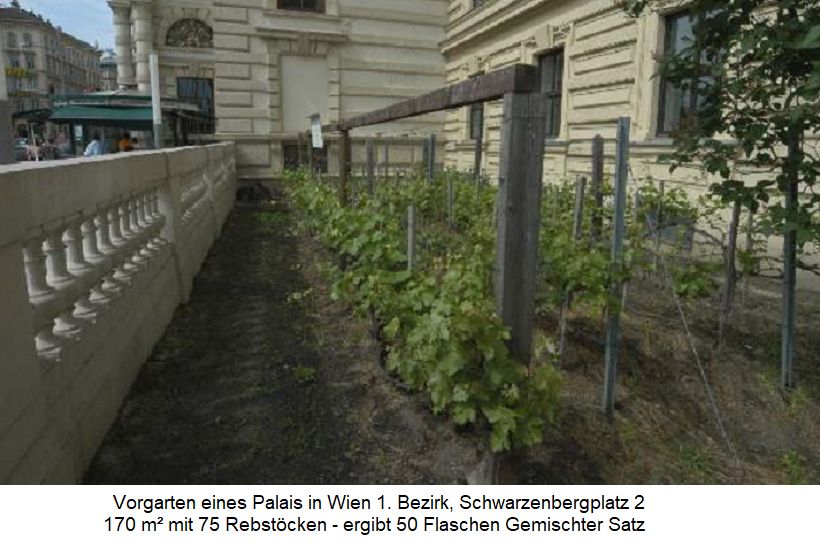 The fact that Wien and wine are inseparable is also manifested by the fact that the two words are formed from the same letters. In the Middle Ages, in several German dialects (for example in Lower Rhine), the city was referred to as "Weyn". The well-known wine author Hugh Johnson writes that no city is as full of wine bliss as Wien . The Viennese Heuriger is known worldwide and many guests come to Wien(also) for this reason. In the 180 Heurigen establishments, the sale of high-quality bottled wines by the glass has also become established. Well-known wine villages with many Heurigen are Grinzing, Heiligenstadt, Jedlersdorf, Mauer, Neustift am Walde, Nussdorf, Oberlaa, Sievering, Stammersdorf and Strebersdorf.

In 2016, the vineyards covered a total of 637 hectares of vines. Compared to 2009 with 612 hectares, there was an increase of 4%. The share of the clearly dominant white wine varieties amounts to 83%, the share of red wine varieties to 17%. The white mixed grape variety displaced Grüner Veltliner from the top position.