The federal state of Styria with its capital Graz is located in the south-east of Austria. It borders the federal states of Carinthia in the southwest, Salzburg (west), Upper Austria and Lower Austria in the north, Burgenland in the east and Slovenia in the south. The Celts practised cultivated viticulture as early as the fourth century BC. As in all of Central Europe, the Frankish Emperor Charlemagne (742-814) gave new impetus to viticulture. In the Middle Ages, the Roman Catholic Church and its monasteries, especially Rein Abbey of the Cistercian monastic order, made a great contribution to Styrian viticulture. In 1406, 535 places with 6,000 vineyards were already documented. In the 16th century, the vineyards covered 35,000 hectares, which was about eight times as much as today.

The Habsburg Archduke Johann (1782-1859), who is still highly revered in Styria today, owned a castle in what is now the Schilcher centre of Stainz. In 1822 he founded an experimental vineyard near Marburg, thus setting the course for quality-oriented viticulture. The Archduke had the grape varieties Traminer, Sauvignon Blanc, Silvaner, Riesling and Pinot Blanc, which had been unknown locally until then, planted and tried out new forms of education. He also promoted the training of winegrowers and hygiene in wine production. In 1872, the Styrian School of Fruit and Viticulture was founded in Marburg. The first director Hermann Goethe (1837-1911) was one of the most distinguished viticultural experts and ampelographers of his time. Today, Styrian winegrowers are trained at the viticulture school in Silberberg near Leibnitz.

After the First World War (1914-1918), a large part of the vineyards were lost to Slovenia as a result of the Treaty of Versailles. The Second World War (1939-1945) brought great devastation, as Styria was a combat zone in many places. Viticulture suffered a decline and in the early 1960s the area under vines was only about 1,600 hectares. Thanks to targeted support from the Styrian provincial government in the form of winegrowing plans with the renewal and increase of vineyards and conversion to modern forms of cultivation, the number of vines was increased again to about two and a half times its original size.

The climate lies at the interface of the southern European Mediterranean climate in the west and south, and the Pannonian climate with hot, low-precipitation summers in the southeast. Annual precipitation amounts to 1,200 millimetres in the west, but only 800 millimetres in the east. Large temperature fluctuations between day and night in autumn give the wines a variety of aromas. In the south-eastern area around Bad Gleichenberg, Kapfenstein, Klöch, Riegersburg and Straden, soils of volcanic origin with towering Vuklan cones, sandy loams, clays and basalt weathering predominate. In the Sausal there is a siliceous rock brown earth over mica schist and gneiss. Around Fürstenfeld and north of it around Hartberg and Weiz there are slate weathering soils. In the hill country of Gamlitz, Glanz, Grassnitzberg, Plössnitz, Zieregg and Zoppelberg there is sandy-toned sedimentary rock known as opok, mixed with shell limestone. 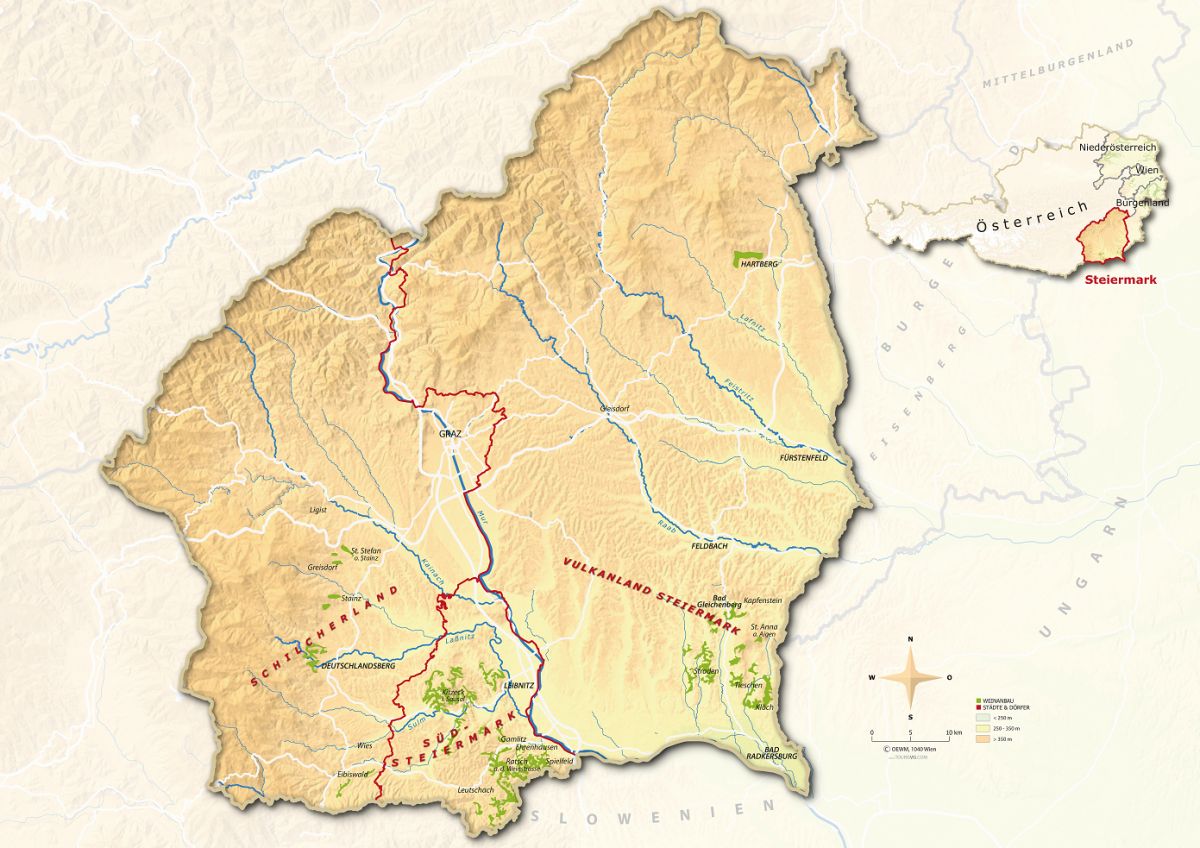 All vineyards are located in the south near the border with Slovenia. The vineyards are widely scattered and are mainly planted on steep southern slopes up to 650 metres above sea level (Vulkanland Steiermark, Ringkogel near Hartberg). Around 70% of the vineyards are partly terraced slopes with a gradient of more than 26% and are thus classified as "mountain vineyards" according to Austrian wine law. The emblem of Styrian viticulture is the Klapotetz, a wind-powered device against harmful birds. The numerous wine roads are worth mentioning. Since 2018, there has also been a "Grazer Stadtwein" (Graz city wine) from revitalised vineyards of the Kehlberg in Graz. 75% of the wines produced are white, mostly dry and fruity. A Styrian speciality is Schilcher from the Blauer Wildbacher variety.

In contrast to the two federal provinces of Burgenland and Lower Austria (where the individual DAC areas were realised one after the other), an overall concept applies to all three specific wine-growing areas. There is a three-level pyramid of origin with regional wine, local wine and Riedenwein. Styrian varietal diversity is taken into account in different ways (see graphic). In the case of regional wine, it is preserved; in the case of local wine and partly also in the case of Riedenwein, local leading varieties have been defined differently for each wine-growing region. The regional wines may be marketed from 1 March, the ried wines and the local wines from 1 May of the year following the harvest. An exception is made for wines made from Welschriesling and Schilcher, which may be marketed as early as 1 December of the year of harvest. There is also an exception for Steirischer Junker, which is traditionally presented at the beginning of November. 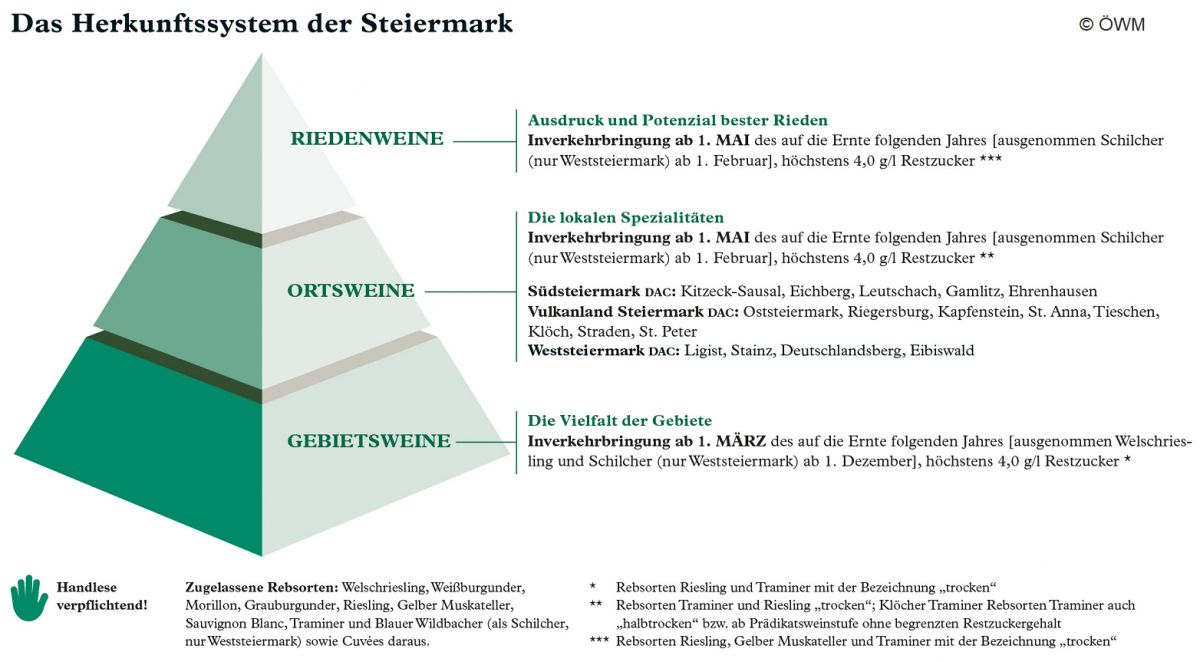 Verein Wein Steiermark represents over 750 members, other large winegrowers' associations are Steirische Terroir & Klassikweingüter and Erzherzog Johann Weine. The wineries are listed under the wine-growing regions.