Viticulture in Spain has an ancient tradition, as vines were cultivated here at least 5,000 years ago. The Phoenicians founded the city of Gadir (Cádiz) around 1100 BC and traded heavily in wine in the Mediterranean region. The first flowering occurred in 200 BC, because the Romans loved the wine from Baetica (Andalusia). Development was halted by the Moorish invasion in 711. For religious reasons, the Muslims cleared large parts of the vineyards or only allowed the production of sultanas. They brought with them the art of distillation, which was not used for alcoholic beverages, however, but for essential oils, as scents and fragrances. It was only after 700 years that the Christians succeeded in reconquering and, advancing southwards, they planted new vineyards. As in many other countries, it was mostly Catholic monastic orders that planted vines near their monasteries for the preparation of Mass wine. In the following centuries, viticulture developed into an important economic and export branch. From the beginning of the 16th century, the conquistadors brought huge quantities of wine to the newly discovered America. The Spaniards planted European vines in many areas there and thus initiated viticulture on this continent, especially in Central and South America. They thus made a significant contribution in many countries of the New World. 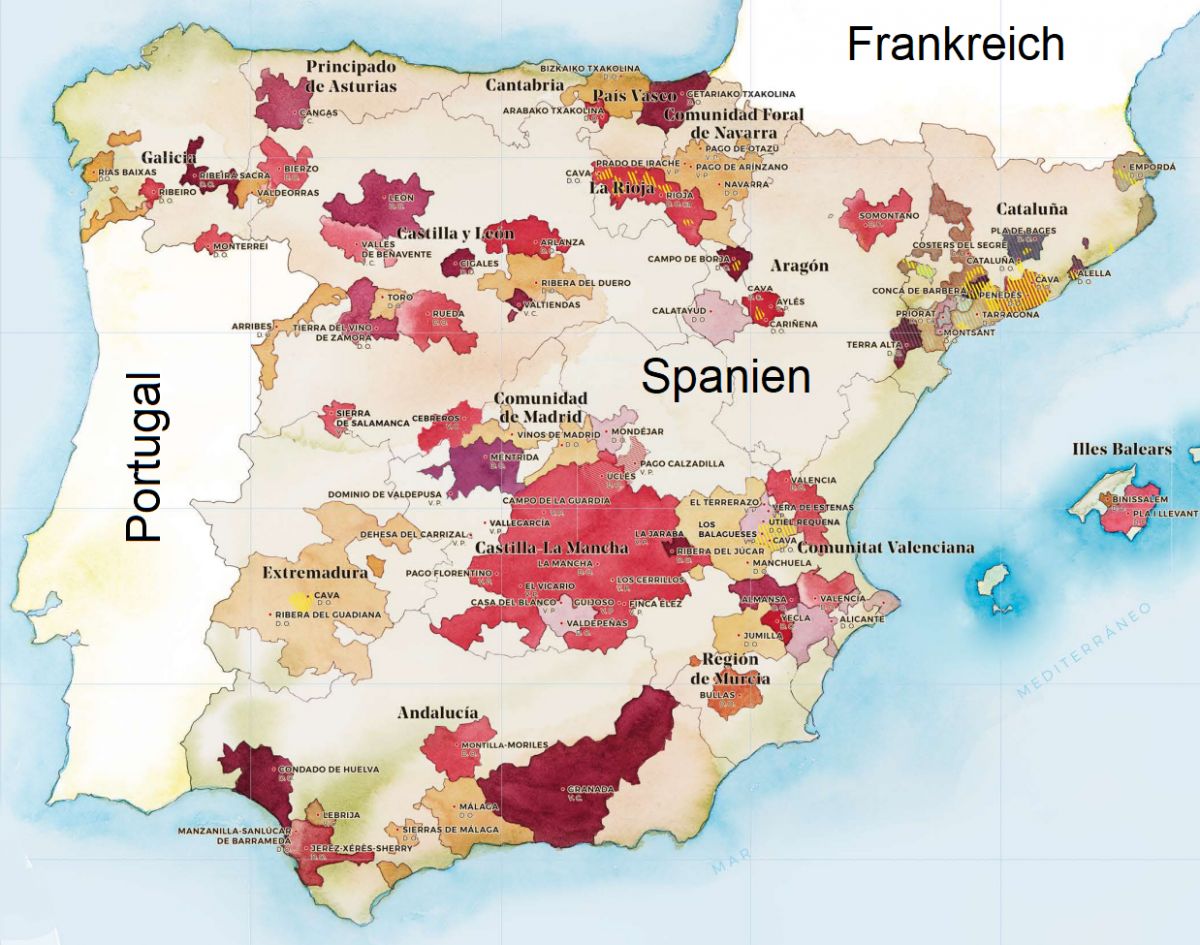 In the second half of the 19th century, as in all European countries, phylloxera invaded Spain and destroyed a large part of the vineyards. But the Rioja area was spared for the time being and when the pest reached this area at the beginning of the 20th century, most of the vineyards had already been planted with grafted vines. With the vineyards destroyed by phylloxera, the French could no longer meet the demand for wine in their own country. At first, French merchants bought large quantities of wine in Spain, and later many French winegrowers emigrated to Spain and practised viticulture. Their sophisticated cellar techniques have left a lasting mark on viticulture to this day.

Between July 1936 and April 1939, a civil war broke out between the democratically elected government of the Second Spanish Republic and the right-wing putschists under General Francisco Franco (1892-1975). During this time, vineyards and many wineries were destroyed on a large scale. After the opening of the borders and the accession to the European Union in 1986, there was a new beginning in Spanish viticulture. From the 1960s onwards, a great boom began with the original Spanish wines Rioja and Sherry. Today, Spain is one of the most dynamic wine countries in the world.

Spain is one of the most mountainous countries in Europe. The western mountain ranges are largely composed of metamorphic and crystalline rock. Slate is the most common parent rock of the country's best vineyards. This occurs mainly on the Catalan coast, in the Priorato highlands, in the Rioja region and in the Douro port wine region. in large areas of the lowlands in the north and east, the parent rock consists of sediments. In the coastal regions, light, sometimes sandy soils dominate. In the sherry region of Jerez, the Albariza soil is very calcareous. The Canary Islands, on the other hand, are of volcanic origin.

The country is crossed by several large bodies of water that have a positive influence on viticulture. These are mainly the Ebro and Duero in the north, the Tagus in the west, the Guadiana in the south and the Júcar and Turia in the east. Spain is divided into three major climatic zones. In "Green Spain" in the north with Aragon, Asturias, Basque Country, Galicia, Cantabria, Catalonia, Navarre and La Rioja, there is a high amount of precipitation with hot summers and cold winters. In the centre lies the vast central plateau of Meseta (table land) with the regions of Extremadura and La Mancha. It is characterised by extremely hot summers, cold winters and low rainfall. The third zone is the coastal strip with southern Catalonia, the Levante and Andalusia. Here, sea breezes alleviate the hot summers, but there is little rain.

In 1970, a classification system with controlled designation of origin was introduced, based on the Italian and French wine laws. The regions with the classified areas (DO, DOCa): 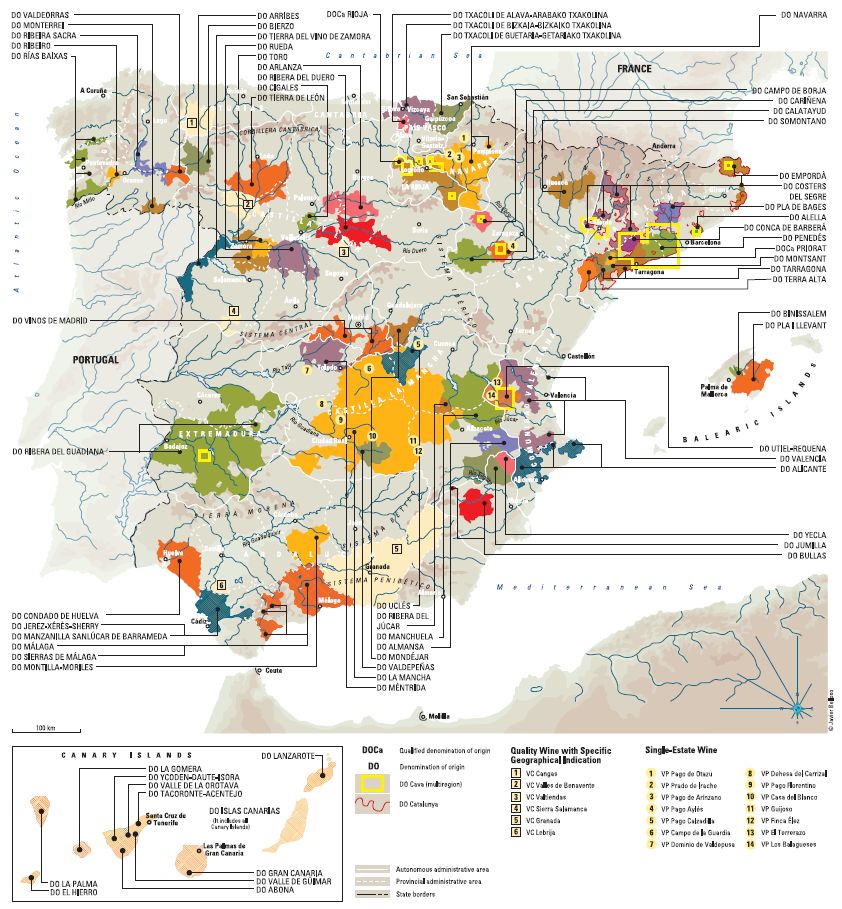 The vineyards cover 975,000 hectares of vines, from which around 40 million hectolitres of wine have been produced (see also under wine production volumes). This puts Spain at the absolute top of the world. There are over 600 grape varieties, the majority of which are autochthonous. The grape variety index 2010 (Kym Anderson):

The central body for all quality wines is the INDO (Instituto Nacional de Denominaciónes de Origen), whereby each DO region has its own supervisory authority, the "Consejo Regulador". This is made up of employees of the Ministry of Agriculture, winegrowers, producers, traders and biochemists. With the "Reglamento", this authority defines the permitted grape varieties (and also decides on new plantings), the permitted rootstocks, the yield in hectolitres per hectare, the stocking density, the pruning and the vinification methods(ripening technique, alcohol content, residual sugar, dry extract values). Only after organoleptic examination of the wines by a committee of the Consejo is the label approved. In August 2009, the EU wine market regulation became valid for all member countries with fundamental changes to the wine designations and quality levels; the new designations are (see also under quality system):

DOP (Denominación de Origen Protegida): For quality wines, there are five different categories within the designation DOP, which may continue to be used as traditional designations:

VCIG (Vino de Calidad con Indicación Geográfica): these are quality wines of geographical origin with regional characteristics in terms of grape varieties and vinification (in the past this was, so to speak, a step between country wine and quality wine or a DO preliminary stage). There are seven such areas.

DO (Denominación de Origen): There are 67 DO areas

DOCa (Denominación de Origen Calificada): This level was introduced in 1988 (and corresponds roughly to the DOCG in Italy). It is only awarded to wines from outstanding areas whose production is particularly carefully controlled. Only two areas have been classified so far, Rioja in 1991 and Priorato in 2001. Ribera del Duero is mentioned as the next candidate.

Vino de Pago (DO) or Vino de Pago Calificado (DOCa): This designation was introduced in 2003 for vineyards or vineyards with a special character. They can be located within a DO or DOCa area, but also outside of it. They are usually owned by a single winery. A detailed description as well as a complete list of the 17 classified areas can be found under Vino de Pago.

In addition, there are still a variety of traditional designations related to winemaking or quality. The most important of these are:

Maturity: Traditionally, Spanish wines are only marketed when they are ready to drink. Depending on the type of wine, there are specifications for the maturation period in barrel and/or bottle. Top producers often exceed these deadlines by far. White and rosé wines only have to mature for six months in the barrel and may be marketed one year earlier; there are hardly any reservas or gran reservas. For the red wines there are the following designations:

Joven: young wine that is already sold the year after the grape harvest and has only matured for a short time (maximum six months) or not at all in the barrel. These are intended for immediate consumption.

CrianzaThese wines must be aged for at least 24 months, including six months in cask and 18 months in bottle.

ReservaThese wines must be aged for at least 36 months, of which at least 12 months in cask and the rest in bottle. Reserved for DO and DOCa wines.

Gran Reserva: These wines must have matured for at least 60 months, of which at least 18 months (until 2005 it was 24) in the barrel and the rest in the bottle. Reserved for DO and DOCa wines.

Ageing classification: Independent of the regulations for Crianza, Reserva and Gran Reserva, there are designations that may be used depending on the ageing and type of maturation. These are Añejo (24 months), Noble (18 months) and Viejo (36 months). These certify wines with a higher age as being of "better quality".

Cards: Foods and Wines from Spain

Sources of Purchase for Spain 45

Fedellos do Couto — Galicia 2018 Cortezada
» Wine rating only available for Premium Members Up to 20.00 €

In this section you will find
currently 144,826 Wines and 22,894 Producers, including 2,432 classified producers.
Rating system Their sources in Wine Guide Wine Samples