The production area is located in the federal state of Saxony in Germany. There is no evidence that the cultivated viticulture goes back to Bishop Benno of Meissen (1010-1106). A vineyard on the Elbe was first mentioned in 1161 in a deed of gift from Margrave Otto of Meissen (1156-1190) to a Cistercian monastery. Elector Christian I (1560-1591) issued the first set of viticultural rules in 1588. At the beginning of the 17th century, Württemberg winegrowers were brought to the Elbe to introduce cultivation methods "Württemberger-style" such as terracing the steep slopes with dry stone walls. As viticulture was carried on as far as the lowlands of the Elbe, where it had replaced food production, Elector Johann Georg III issued a decree on the cultivation of wine. (1647-1691) issued a ban in 1684 on "Where the plough can go, no vine shall stand". The Saxon royal family owned vineyards in Pillnitz and Wachwitz, as the Royal Vineyard indicates. In the middle of the 19th century there were still almost 1,700 hectares of vines, but a large part of them were destroyed by mildew and phylloxera.

The vineyards cover 501 hectares of vines north of the 51st parallel and stretch for 50 kilometres along the slopes of the Elbe and its tributaries. The easternmost German vineyard lies on the border with Poland. Since 2006, some vineyards in the federal state of Brandenburg with the four municipalities of Burkersdorf, Luckau, Neuzelle and Schenkendöbern have also been part of the Saxony wine growing region. The Saxon Wine Route runs from Seußlitz in the north along the Elbe to Pirna shortly before the border with the Czech Republic. The soils consist mainly of slate with sandstone, clay, loam and loess. There is a continental climate with hot, dry summers and occasionally harsh winters with late frosts. 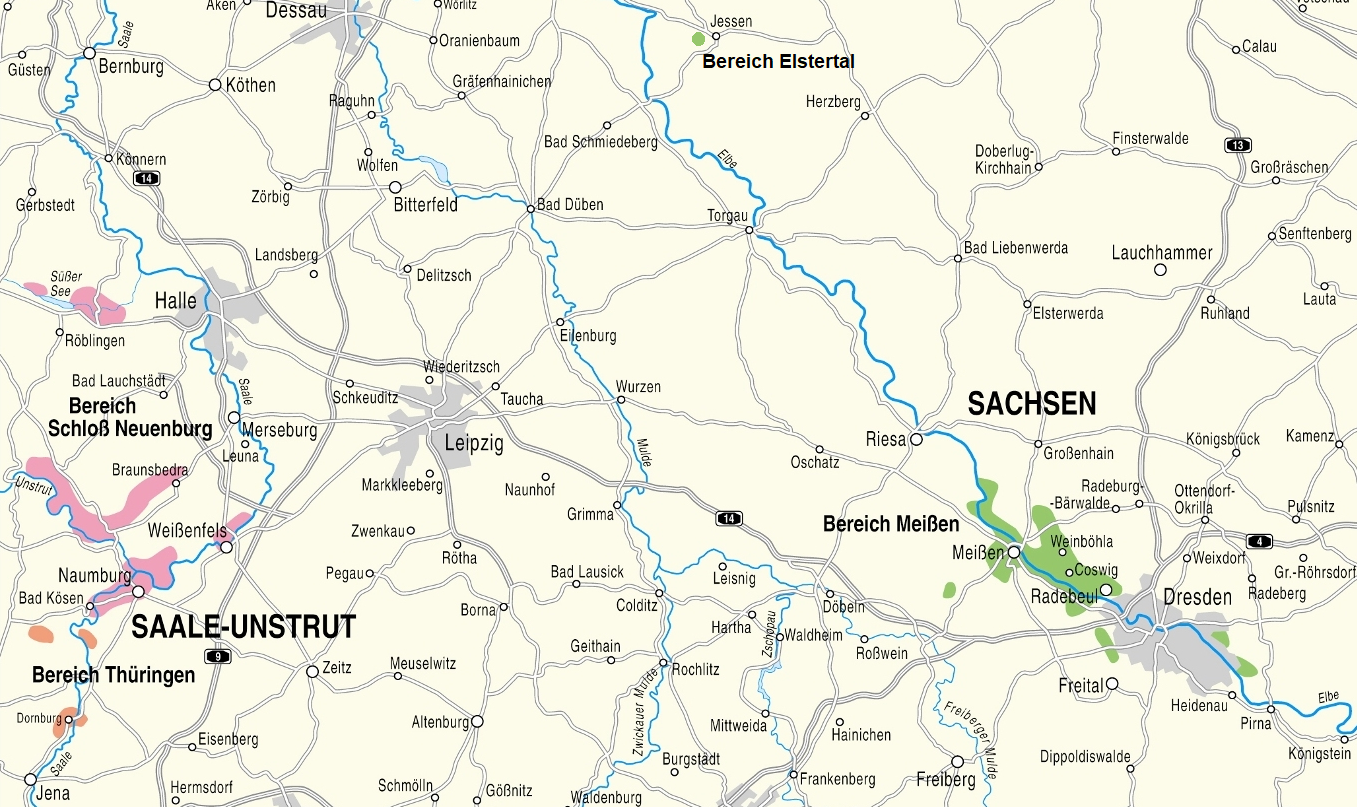 There were no major changes compared to 2009. There is no clearly dominant grape variety as in most other growing regions. At the top are the fouri white wine varieties Müller-Thurgau, Riesling, Pinot Blanc and Pinot Gris with similar quantities. The status 2018 (0 = less than 0.5 ha):