The Rhône, over 800 kilometres long, is one of the most important wine rivers in the world. Like all bodies of water, it has a positive effect on viticulture or creates the conditions for it by forming valley slopes, some of which are very steep. The river rises at the Furka Pass as a glacial stream in the Swiss Alps of Uri, flows through the canton of Valais and Lake Geneva under the name Rotten, crosses the French border, turns south from Lyon and flows into the Mediterranean south of Arles-sur-Rhône. In the 6th century BC, the Greeks founded the Rhône. The Greeks founded the city of Marseille (Massilia) at the mouth of the Rhône in the 6th century BC and brought the vine to the valley. The Celts (Gauls) were also already cultivating vines in today's Côte Rôtie and Hermitage (Crozes-Hermitage) appellations. Allegedly, they taught the Romans the art of refinement.

The Roman scholar Pliny the Elder (23-79) reports of a grape variety called Allobrogica, which was supposedly cultivated here by the Celtic tribe of the Allobrogians. At the beginning of the second century, the area became part of the Roman province of Gallia Narbonensis. Roman viticulture is attested by many finds of amphorae, statues of the wine god Bacchus and mosaics with wine motifs. Many exhibits are on display in the "Musée de la Civilisation Gallo-Romaine" in Lyon. At the beginning of the 14th century, the papal court was moved to Avignon, and seven popes ruled here from 1309 to 1377. This gave a strong impetus to viticulture, as most of the wine at the papal table came from the Rhône Valley. The name Châteauneuf-du-Pape was derived from the castle Pope John XXII (1245-1334) had built as a summer residence north of Avignon.

The Rhône wine-growing region or "La Vallée du Rhône" refers to the approximately 200-kilometre stretch from Lyon south to Avignon in south-eastern France. On both sides of the Rhône and its tributaries are around 80,000 hectares of vineyards spread across the six départements of Ardèche, Drôme, Gard, Loire, Rhône and Vaucluse. But only a small area in the far north is in the Rhône département and, amazingly, this is where 70% of the production of Burgundy, its northern neighbour, comes from. For over 150 kilometres, the Rhône runs parallel to the Loire, which gave its name to the region to the east. The two rivers are only about 50 km apart along this stretch, but flow in opposite directions.

The elongated region is divided into "Rhône Septentrional" (septentrional = northern) and "Rhône Méridional" (méridional = southern). The two sections are very different in terms of climate, soil and grape varieties. Common to both, however, is the mistral, a cold and dry north wind, against which many vineyards are lined with cypresses and poplars. The wines from the left (eastern) bank are generally considered heavier and higher in alcohol. Overall, the region produces over 90% red wines from 6,000 wineries, with the remainder being rosé and a very small amount of white wines. 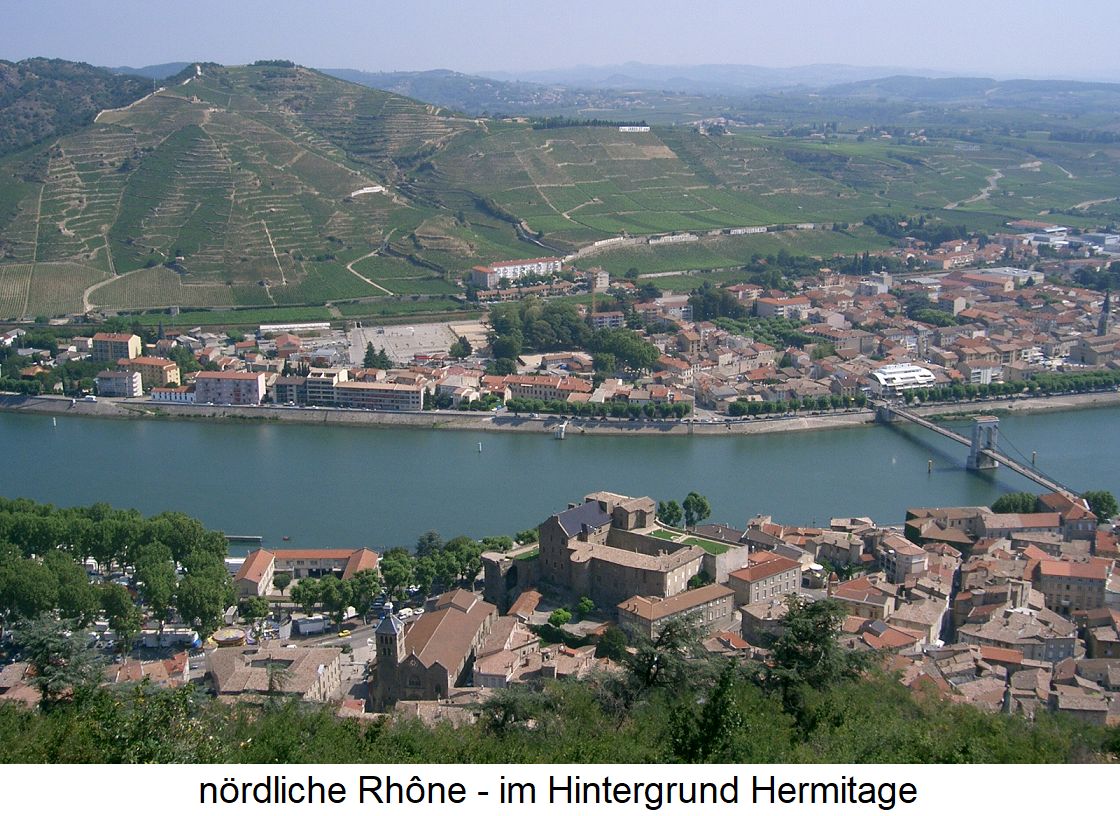 This area begins at the town of Vienne, near the three appellations of Château-Grillet, Condrieu and Côte Rôtie. It extends straight south to the city of Valence with the Cornas and Saint-Péray appellations located here. The climate is continental and the soils are mostly slate and granite. The vineyards are often situated on extremely steep terraced slopes with inclinations of up to 65° (214%). Some of them are among the steepest vineyards in Europe. The Romans had their slaves do the extremely arduous cultivation. Syrah dominates here and is the only red grape variety permitted. The most important white wine varieties are Marsanne, Roussanne and Viognier. For the most part, dark and tannin-rich red wines are also produced in larger quantities as single varietals. These are often aged classically, i.e. less in new oak. In the northern section, less than 10% of the wine volume is produced.

Further south, there is a gap of about 50 kilometres in the course of the river without viticulture or vineyards. However, further east of this is an area sometimes referred to as the middle section on the Rhône tributary the Drôme. Here lie the four appellations of Châtillon-en-Diois, Clairette de Die, Coteaux de Die and Crémant de Die, each named after municipalities, with an already very old sparkling wine production.

This area begins at Montélimar and extends south to Avignon in the department of Vaucluse. Compared to the northern section, the climate is Mediterranean and the soils consist mostly of limestone subsoil interspersed with clay. There are many cave coopératives here, which produce around two-thirds of the volume. Here, too, mainly red wines are produced, the most important variety being Grenache Noir (Garnacha Tinta). Around 20 grape varieties are permitted, resulting in many cuvées of different wine styles. Other red wine varieties are Carignan Noir, Cinsaut, Mourvèdre and increasingly, as in the northern section, Syrah. The typical blend here is called Rhône Recipe. 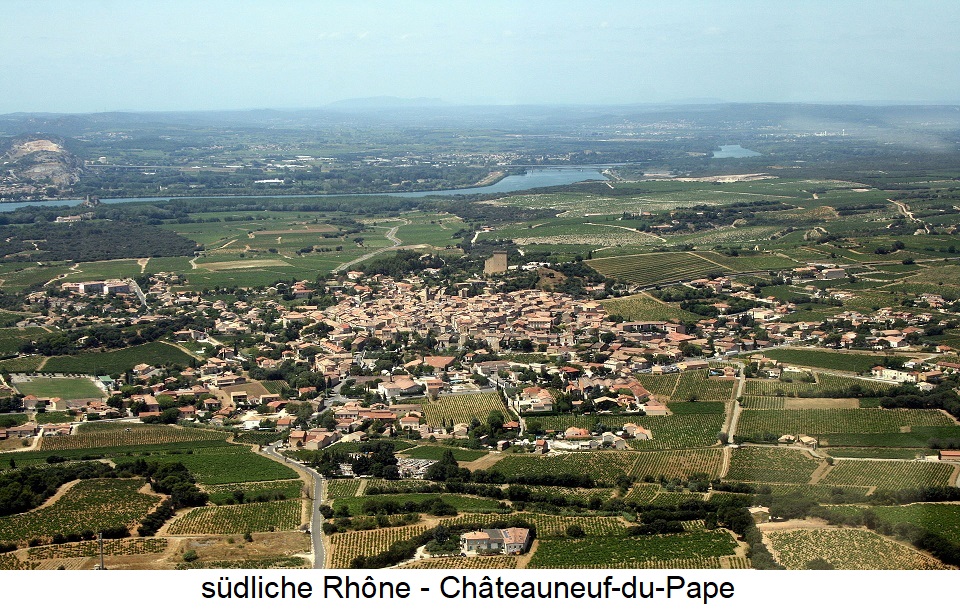 The southern section is dominated by the regional appellation Côtes du Rhône (which also includes smaller areas in the northern section) and the Côtes du Rhône-Villages class, which is only found here. Among the best-known appellations is the aforementioned Châteauneuf-du-Pape area. A special feature is the Tavel area, which is exclusively approved for rosé wines. Sweet vin doux naturel are produced in the Beaumes-de-Venise and Rasteau areas. Somewhat remote appellations are Côtes du Vivarais, Grignan-les-Adhémar, Luberon and Ventoux. Far to the south is the Costières de Nîmes appellation, which geographically belongs to the Languedoc but wine-wise to the Rhône. This group is also called the "Nouvelle École de la Vallée du Rhône" (New School of the Rhône Valley). A total of 16 areas have the regional status of "Cru", which means the rank of a top Rhône appellation. In a broader sense, they belong to the Côtes du Rhône appellation, which is why "Cru des Côtes du Rhône" is also mentioned on the label.

Sources of Purchase for Rhône 71