A peninsula of around 21,000 km² (neo-Greek Morea) in the south of mainland Greece; the name means "Island of Pelops" after a mythological figure. It is completely separated from the mainland by the narrow Corinth Canal, which was artificially constructed in 1893 and is over six km long. Here are the strongholds of ancient culture such as Epidaurus, Mistra, Mycenae, Olympia (the venue of the Olympic Games of antiquity) and Sparta. A flourishing wine culture existed here even in ancient times. On the south-western tip is the port town of Monemvasia, which was a famous transhipment point for sweet dessert wines in the Middle Ages and from which the name Malvasia, used for many grape varieties or wines, is derived. In 2010, Monemvasia-Malvasia was created as the fourth POP appellation, reviving the historic sweet wine. 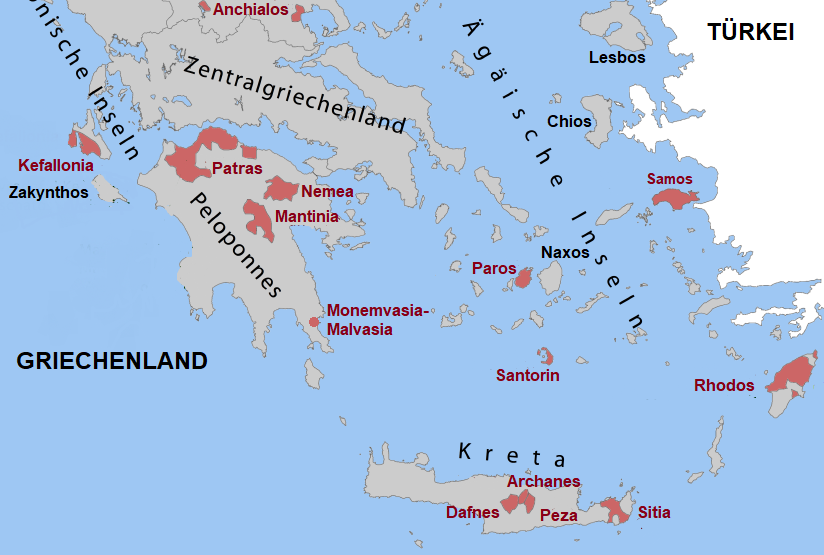 The Peloponnese produces about a quarter of Greece's wine. Table grapes and sultanas (currants) are also produced in large quantities as important export items. These vineyards are mainly located along the coast of the Gulf of Corinth and the Ionian Sea. The climate varies greatly, with abundant rainfall in the west, but long dry periods with little rain in the east.

Most of the production is concentrated in the north in the largest POP area, Patras, with about 4,000 hectares. In the mountainous centre are the POP areas of Nemea (2,100 hectares) and Mantinia, which are situated at altitudes of up to 800 metres. Well-known producers are Constantin, Gioulis, Douros, Etko, Kokkalis, Kourtakis, Lafkiotis, Mercouri, Monemvasia, Oenoforos, Papantonis, Spyropoulos, Skouras, Stavropoulos and Tetramythos.