DO area for the famous dessert wine in the Spanish region of Andalusia, named after the province or provincial capital on the Costa del Sol (south coast). In the same area, normal white, rosé and red wines are also produced under the DO designation Sierras de Málaga. Málaga is one of the oldest types of wine mentioned in writing and was already famous in ancient times. The city was founded by the Phoenicians around 800 BC. Around 600 BC, the Greeks settled in Malaga and brought their wine-growing skills with them. Around 202 BC, the city came under Roman rule under the name "Flavia Malacita". In 743 it was conquered by the Moors. During the Arab occupation there was a ban on alcohol with the death penalty for drunks. Later this was replaced by fines and taxes. 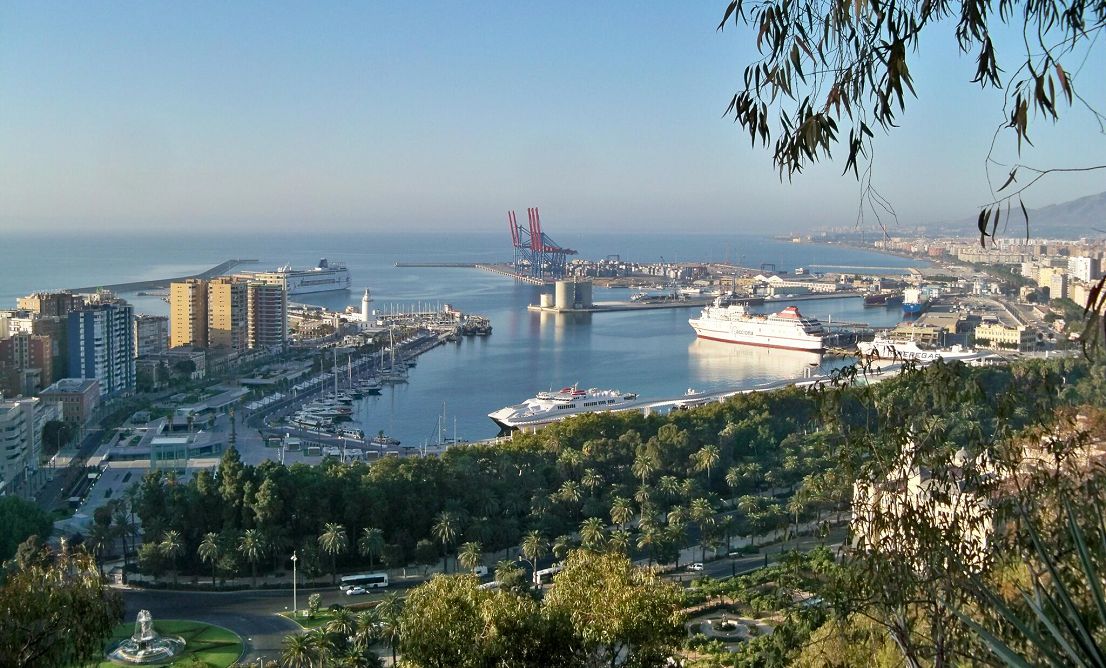 In 1223, the King of France, Philip II. August (1165-1223), organised the "Battle of the Wines". At this event, the most prestigious wines of the era were presented. Málaga wine was called the "cardinal among wines". It was not until August 1487 that Málaga came back into the possession of the Christian kings in the course of the Reconquista. For this reason, a 10-day-long exuberant festival is celebrated every year in this month. In the 18th century, the wine was already known far beyond its borders. In 1791, the Spanish ambassador in Moscow gave the Russian Tsarina Catherine II. (1729-1796) a few cases of it. She was delighted and decreed that in future it could be imported duty-free. In the Victorian era under Queen Victoria (1819-1901), its popularity reached a peak.

In 1806, the "Casa y Compañía de Comercio de Viñeros de Málaga" was founded by royal decree: " In order to prevent the grapesfrom being pannedas far as possible, marks of origin, which are difficult to forge, are applied to the jars, crates or bales containing them. Two intelligent people are chosen to ensure that the wines are as perfect as possible". In the middle of the 19th century, the province of Málaga was still the second largest Spanish wine-growing region with 100,000 hectares of vines. There was a considerable reduction, mainly due to the phylloxera disaster. In 1900, strict regulations were adopted and the origin was certified by a certificate of origin. 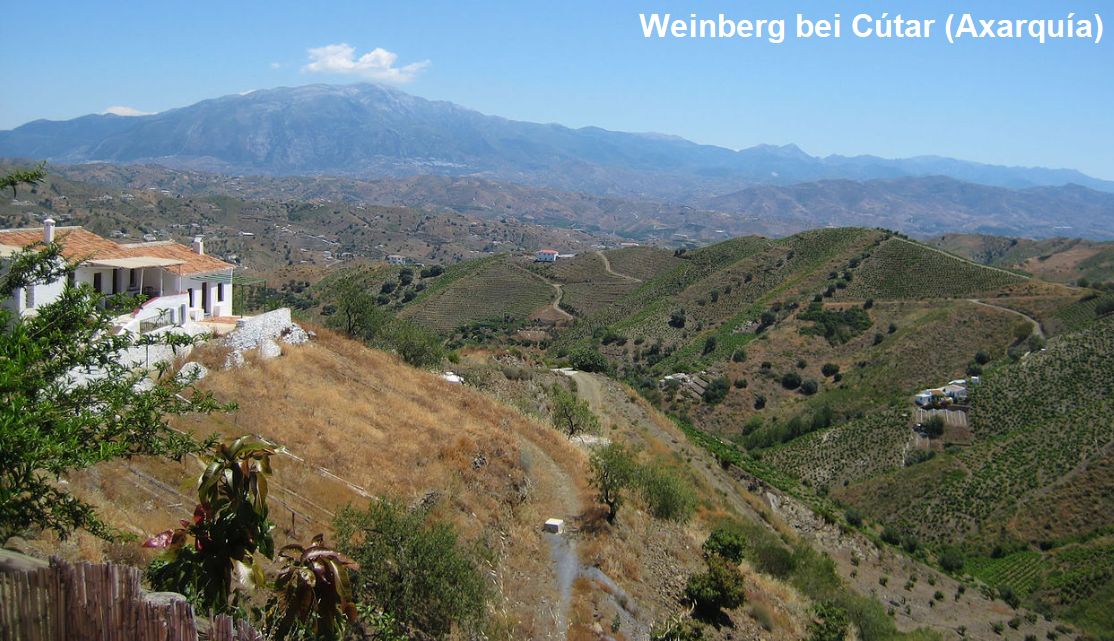 Area of origin and production

Today, the vineyards cover only about 12,000 hectares, of which the DO area is only one tenth with 1,200 hectares of vines. It is divided into five sub-areas: Axarquía (picture), Norte, Costa Occidental, Montes and, most recently, Serranía de Ronda. The vineyards are located in 54 municipalities around the cities of Málaga and Estepona and inland to the banks of the Genil at an altitude of up to 700 metres above sea level. In the north, the soils are interspersed with limestone. In the Axarquía in the northeast, clay slate predominates. In the east there are chalk soils and on the Sierra sandy loam soils.

A Malaga can be extremely long-lived. A bottle bottled in 1875 from the estate of the Duke of Wellington (1769-1852) was tasted in 1995 and showed no deterioration. It should be noted, however, that this is an exception not the rule and there are also very easy qualities to be enjoyed young. Malaga must be made from the Pero Ximén (Pedro Ximénez) and/or Moscatel varieties. Moscatel mainly means Moscatel de Alejandría (Muscat d'Alexandrie), but Moscatel Morisco (Muscat Blanc) is also permitted. Concentrated musts and dry wine of the Doradilla, Lairén (Airén) and Romé varieties up to a maximum of 30% may also be used.

After harvesting, the fully ripe grapes are spread out on straw mats and sun-dried for up to three weeks. Evaporation of the water results in raisined grapes with the highest sugar content. According to DO regulations, the wine must be matured in the bodegas of the city of Malaga. Similar to sherry, Malaga is (alternatively) also produced with the solera system and different wines and vintages are blended together. The sweetness is mostly achieved by stopping the fermentation by spriting with wine spirit. Other types are sweetened with arrope (unfermented, boiled down must) before or after fermentation. Most types are aged oxidatively in oak barrels for up to five years or longer.

Details on the bottle label

On the bottle label there is information about sweetness level, colour, ageing (in the barrel), alcohol content and type.

There are around 15 types of Malaga, ranging from dry to sweet, with an alcohol content of between 15 and 22% vol.

Pedro Ximénez (Pero Ximén) and Moscatel: The name of a variety may be used if the wine is made from at least 85% of the corresponding variety, minus the amount of products possibly used for sweetening.

Pálido: Name for the Pedro Xyménez and Moscatel types to which neither arrope nor alcohol has been added and which have not undergone ageing.

Pajarete (Paxarete): A fortified wine or vino dulce natural without the addition of arrope. The dark amber coloured wine ages for at least two years and has a residual sugar content between 45 and 140 g/l.

Dulce Color: This is the classic Málaga - sweet, dark coloured and high in alcohol. It must have at least 300 g/l residual sugar content and (before spriting) at least 13% vol. Alcohol content. The wine, with up to 15% arrope, is mainly made from Pedro Ximénez, but may also contain small amounts of Moscatel.

Lágrima and Lacrimae Christi: For the top product, only the free-run must (Lagrima = tears) drained from the uncrushed grapes is used, similar to the Eszencia in Hungarian Tokaj. The mahogany-coloured wine has a caramel and roasted aroma and is fortified to between 14 and 22% alcohol by volume. A Lágrima aged for more than two years is called "Lacrimae Christi" (Tears of Christ).

There are about 425 winegrowers and 16 wineries (bodegas) that produce about 60,000 hectolitres of wine annually. More than a third of this is exported. Well-known producers are Barceló, Gomara, Larios, López García, López Hermanos, López-Madrid, Muñoz Cabrera, Pérez Teixera, Quitapenas, Schatz, Scholtz Hermanos (closed in 1996 - but wines are still on offer), Telmo Rodríguez and Tierras de Molina.

In this section you will find
currently 144,756 Wines and 22,894 Producers, including 2,432 classified producers.
Rating system Their sources in Wine Guide Wine Samples