Unfortunately there is no information about Côtes du Rhone AOC available.

The regional appellation stretches along both banks of the Rhône for over 200 kilometres, from Vienne in the far north to Avignon in the far south. The classification was granted as early as 1937. It includes some areas of the northern and large parts of the southern section of the Rhône. This is why this appellation is sometimes used as a synonym for the entire Rhône valley. The vineyards cover 42,000 hectares of vines in the six departments of Ardèche, Drôme, Gard, Loire, Rhône and Vaucluse. More than 90% of the wines produced are red and only 2% white, which is also true for the entire region. The majority are light, fruity red wines produced by means of carbonic maceration, which are marketed as primeur for quick enjoyment. 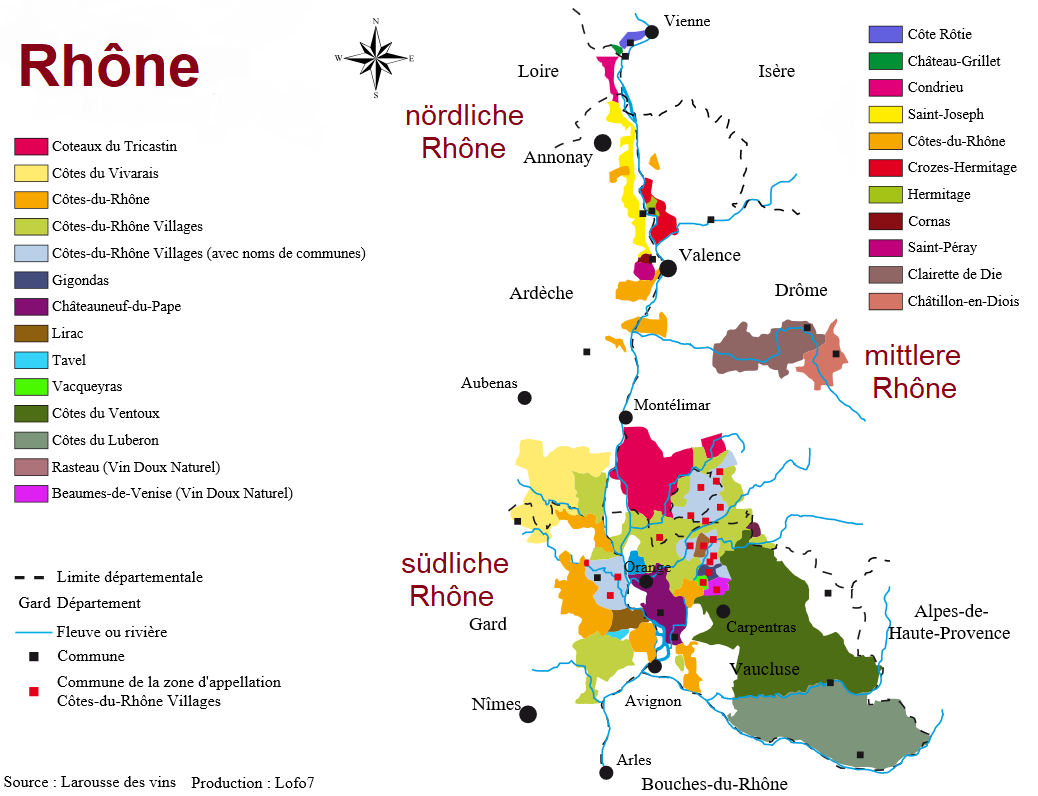 From DalGobboM in the Wikipedia on frz. - Own work, GFDL, Link

The most important red wine varieties are Carignan Noir, Cinsaut, Grenache Noir (Garnacha Tinta), Mourvèdre (Monastrell) and Syrah, the most important white wine varieties are Clairette, Grenache Blanc (Garnacha Blanca), Marsanne, Roussanne and Viognier. The next higher quality level is formed by the Côtes du Rhône-Villages wines (see the best-known producers there) with stricter regulations such as lower maximum yields. Of the 105 communes, 20 are allowed to indicate the commune name. A total of 16 Rhône areas have the regional status "Cru", which means the rank of a top appellation. In a broader sense, these belong to the Côtes du Rhône appellation, which is why "Cru des Côtes du Rhône" is additionally stated on the label. They are the top quality appellation.

In this section you will find
currently 153,238 Wines and 24,003 Producers, including 2,374 classified producers.
Rating system Their sources in Wine Guide Tasting samples Editorial schedule