Unfortunately there is no information about Collio Goriziano DOC available.

DOC area (often just Collio for short) for a wide range of red and white wines in the Italian region Friuli Venezia Giulia. The name means "hill of Goriziono". The zone includes the municipalities of Capriva del Friuli, Cormons, Dolegna del Collio, Farra Isonzo, Gorizia, Mossa, San Floriano del Collio and San Lorenzo Isontino in the province of Gorizia (Gorizia). To the north, the DOC area Colli Orientali del Friuli in the province of Udine adjoins, the border being formed by the river Judrio. The area with about 1,500 hectares of vineyards stretches over the hilly country between the rivers Judrio and Isonzo in the west to the Slovenian border in the east. Both areas, which are similar in terms of geology and wines, once belonged to the Habsburg Empire. However, while the province of Udine became Italian as early as 1866, Gorizia only joined Italy after the First World War. The soil consists of calcareous marl and sandstone, which is heavily interspersed with minerals. This is called "flysch of Cormons" after a commune. Around 80% of the wines produced are fragrant white wines. Pinot Grigio in particular caused an international sensation from the 1980s onwards and established the fame of the white wines. 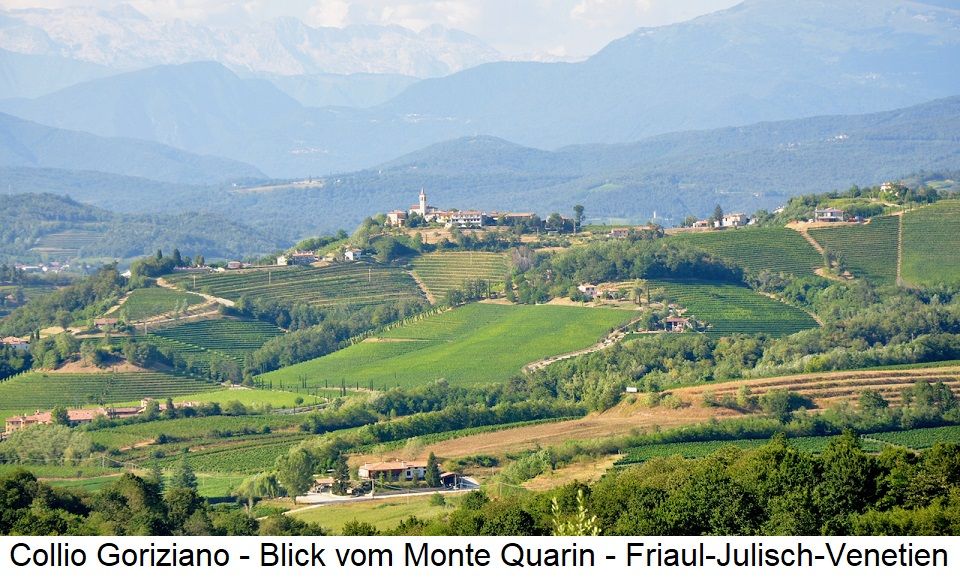 The single-varietal wines are produced from at least 85% of the respective variety and a maximum of 15% of the other authorised varieties. The white wines are Chardonnay, Friulano (Tai = Sauvignonasse), Malvasia (Malvasia Istriana = Malvazija Istarska), Müller-Thurgau, Picolit, Pinot Bianco (Pinot Blanc), Pinot Grigio (Pinot Gris), Ribolla or Ribolla Gialla, Riesling Renano (Riesling), Riesling Italico (Welschriesling), Sauvignon (Sauvignon Blanc) and Traminer Aromatico (Gewürztraminer). The red wines are Cabernet (Cabernet Franc and/or Cabernet Sauvignon), Cabernet Franc, Cabernet Sauvignon, Merlot and Pinot Nero (Pinot Noir). All wines with an alcohol content of at least 12% vol. (Picolit 14% vol.), as well as an ageing period of at least 20 months for the white wines and at least 30 months for the red wines may be called Riserva be called

In this section you will find
currently 147,125 Wines and 23,233 Producers, including 2,225 classified producers.
Rating system Their sources in Wine Guide Tasting samples