Unfortunately there is no information about Chateauneuf-du-Pape AOC available.

The history of this famous French wine in the southern Rhône is closely linked to the Roman Catholic Church. From 1309 to 1377, the city of Avignon was the seat of the popes and, from 1378 to 1408, of two counter-popes. Clement V (1264-1314) became the first Pope in exile here in 1309, followed by six more. One of them was Pope John XXII (1244-1334), born in Cahors, who chose Châteauneuf Castle as his summer residence. He had the castle converted into a summer residence and gave important impulses to viticulture. He brought in winegrowers from Cahors, who established viticulture here and produced a red wine called "Vin d'Avignon". This was, so to speak, the predecessor of Châteauneuf-du-Pape, but this name only became common in the 19th century. The present-day municipality of Châteauneuf-du-Pape was called Châteauneuf Calcernier until 1893. The symbol of the city of Avignon with two crossed keys (those of Saint Peter) and the Pope's tiara is a reminder of this past. A great lover of Châteauneuf-du-Pape wine was the President of the Republic, Charles de Gaulle (1890-1970) 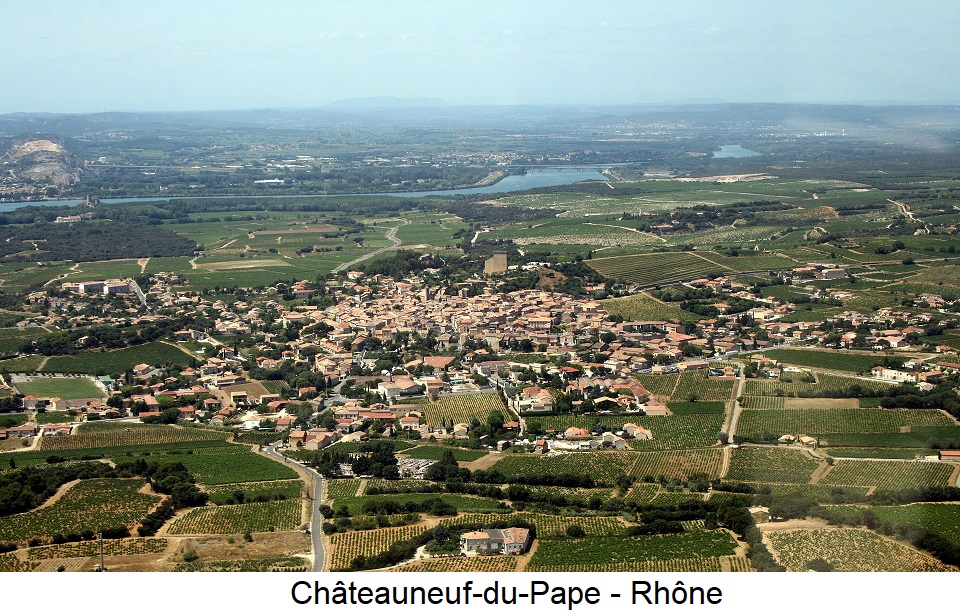 The boundaries of the approximately 3,200-hectare area were established as early as 1929, and recognition as one of the first appellations followed in 1936. Classified as a cru (top appellation), the area is located in the southernmost part of the Côtes du Rhône-Villages area on the left bank of the Rhône (see top of picture in background). It includes the commune of Châteauneuf-du-Pape as well as some sites in Bédarrides, Courthézon, Orange and Sorgues. Characteristic are the large, rolled pebbles (galets roulés) mixed with red, sandy loam, which release the heat stored during the day to the vines at night (see bottom of picture). However, there are also sandy soils. The climate is hot and dry. On 130 days a year the mistral blows, a cold, dry and often strong downdraft wind that dries the grapes quickly even after heavy rain showers. Equally typical are the bush formations known as garrigue on shallow soils, which give the wines earthy tones with tart plant aromas. At least 2% of grapes of insufficient quality must be discarded (le râpé). The average yield is 30 hl/ha. The alcohol content must be at least 12.5% vol. 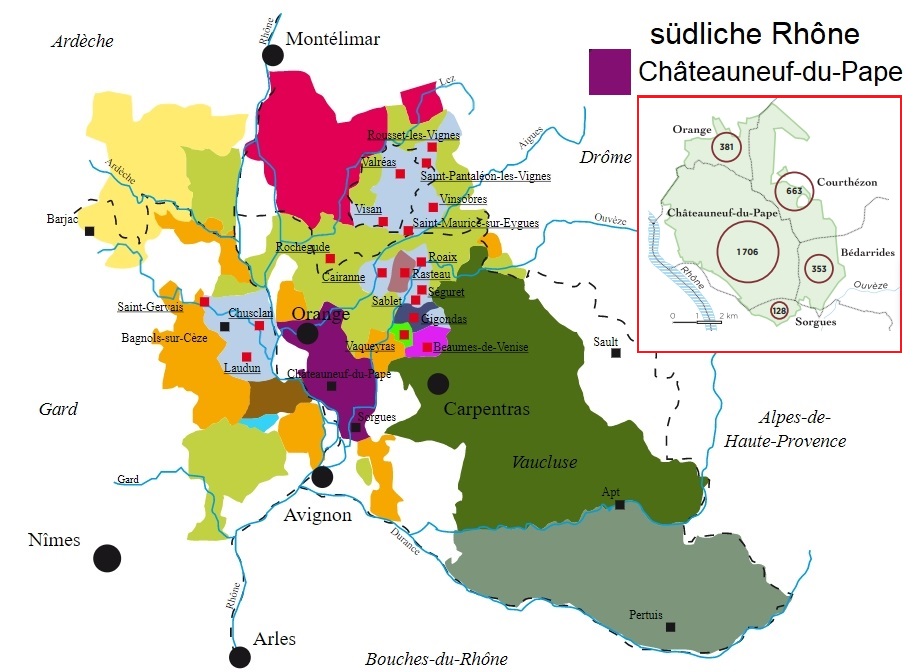 There are red wines and white wines (no rosé); 13 grape varieties are permitted. Pierre Le Roy de Boiseaumarié (1890-1967), the owner of Château Fortia, defined ten in 1923 - three more were added in 1936. The reds are Cinsaut, Counoise, Grenache Noir (Garnacha Tinta), Mourvèdre (Monastrell), Muscardin, Piquepoul No ir, Syrah, Terret Noir and Vaccarèse (Brun Argenté). The white varieties are Bourboulenc, Clairette Blanche, Grenache Blanc (Garnacha Blanca), Oeillade Blanche (Picardan), Piquepoul Bl anc, Roussanne and Terret Bl anc. Grenache, Piquepoul (Picpoul) and Terret are available in red and white; in fact, 18 varieties are permitted. The use of the varieties is completely up to the winemaker.

The usual red wine blend is Grenache Noir (50-70%), Mourvèdre (10-30%), Cinsaut, Counoise, Syrah and Vaccarèse (up to 20%), and the white Bourboulenc, Clairette Blanche and Piquepoul Blanc (up to 10%). However, there are also single-varietal types made from Grenache Noir, such as from Château Rayas, but also (rather few) wineries, such as Domaine de Beaurenard, which use all 13 varieties. The red wines account for around 93% of the production volume. The white wines are always vinified dry and, depending on the vintage, are relatively full-bodied with low acidity

The different terroir and the arbitrary cuvée (mixture of grape varieties) make a generally valid description very difficult. In the past, a distinction was made between two basic types. The spicy type, produced according to the traditional method, is deep dark, high in alcohol up to 14% vol. and can be stored for several decades. The second type is produced with the method carbonic maceration (carbonic acid mashing), has a marmalade-like taste and resembles Beaujolais. Today, however, 14% is almost the lower limit; in the meantime, at least 15% and even 17% are the rule.

Even today, the best Châteauneuf-du-Pape of the traditional type have all the facilities for a maturing period, some of which can last for decades. One should be more careful with the more modern, thick-fruited and particularly alcohol-rich examples. Many of them impress in their youth and receive the highest ratings, but one can always experience disappointment with them after a few years of maturity. Maturation takes place in various containers such as foudre, demi-muid, in smaller quantities barrique (especially for the two varieties Syrah and Roussanne), stainless steel and above all concrete. No minimum ageing period is prescribed; as a rule, white wines age for 9 months and red wines for 12 to 18 months. Great vintages are 1978, 1990, 1995, 1998, 1999, 2001, 2007, 2010, 2015 and 2017. 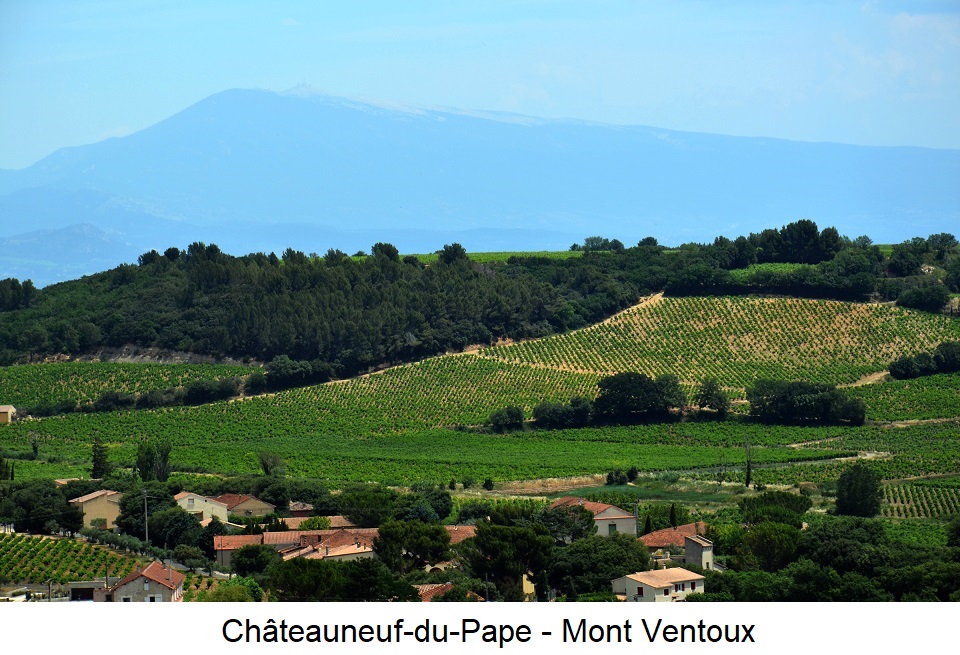