Viticulture in Belgium has a long tradition despite its low economic importance. In the 9th century, under Emperor Charlemagne (742-814), wine was cultivated by monks in southern Belgium. There were vineyards along the Meuse (which was also an important transport route) around Antwerp, Brabant, Hainaut, Liège and Naumur. Even in the early Middle Ages, wines from Flanders (today the two provinces of East and West Flanders, the remaining part is in France) were highly valued and the centre of the northern European wine trade. In the 15th century, due to climatic changes related to the Little Ice Age and competition from Burgundy, viticulture was abandoned. 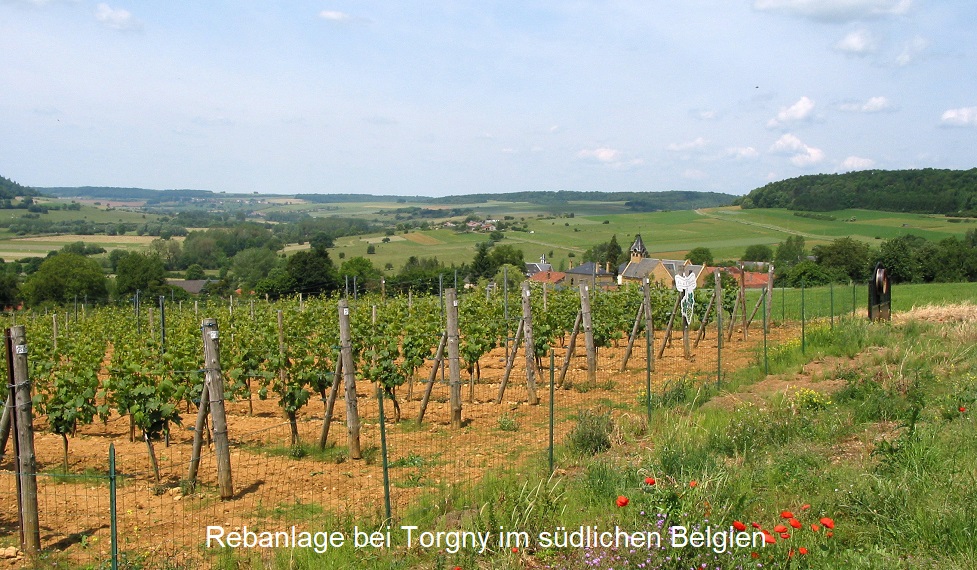 In the 1970s, vineyards were planted again for the first time. Belgian wine law closely follows that of neighbouring France. There are some AOC quality wine areas (Kwaliteitswijn) and country wine areas (Landwijn). In the Flanders region, these are Hagelland, Haspengouw, Heuveland and Maasvallei Limburg (together with the Netherlands). In the Walloon region, these are Côtes de Sambre et Meuse, and the two sparkling wines Crémant de Wallonie and Vin mousseux de qualité de Wallonie. The country wines Vin de pays des jardins de Wallonie (Wallonia) and Vin de Pays Flamand (Flanders) can each be produced in the entire region. Certain grape varieties are permitted for each AOC. These are the white wine varieties Auxerrois, Bacchus, Chardonnay, Kerner, Müller-Thurgau, Optima, Ortega, Pinot Gris, Riesling, Schönburger, Siegerrebe and Würzer as well as the red wine varieties Domina, Dornfelder, Gamay, Lemberger (Blaufränkisch) and Pinot Noir.

The cultivation of table grapes is of great importance. In 1862, Felix Sohie established cultivation under glass in Huldenberg. Today, there are thousands of greenhouses where the likes of Alphonse Lavallée and Leopold III are grown. The wine production volume is around 7,000 hectolitres. The largest wine-growing company is Wijnkasteel Genoels-Elderen. However, Belgian wine demand is mainly covered by imports from France.

Sources of Purchase for Belgium 1

Airén
In this section you will find
currently 154,643 Wines and 24,125 Producers, including 2,472 classified producers.
Rating system Their sources in Wine Guide Tasting samples Editorial schedule