Unfortunately there is no information about Beaujolais AOC available.

The French wine-growing region is part of Burgundy in terms of wine law and is located in the extreme south of this wine-growing region. Historically, however, Beaujolais has never been part of it. An exception is the northern part, which belongs to the département of Sâone-et-Loire and thus administratively to Burgundy. The major part, however, with the capital Villefranche-sur-Saône, belongs administratively to the Département Rhône and thus to the Rhône-Alpes region. The southernmost part of the Beaujolais forms its own appellation, Coteaux du Lyonnais. This is an ancient wine-growing region, as, among other things, remains of Roman vineyards have been discovered at Mont Broully (one of the cru communes). In the 7th century AD, Benedictine monks planted more vineyards. This is therefore a very old wine-growing region. 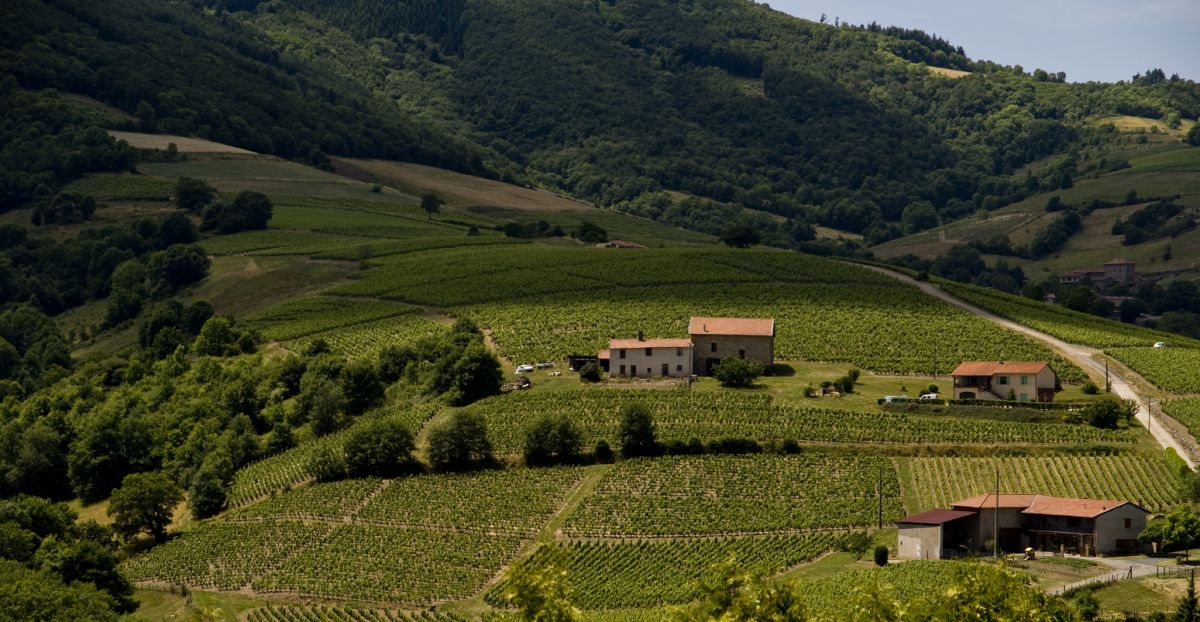 The name derives from the Burgundian high noble family of the Beaujeu, who ruled here in the period from 950 to 1400. At the foot of their castle fortress, the small town of Beaujeu was founded in the 10th century. Its independence from Burgundy came with the edict of Philip II the Bold, Duke of Burgundy (1342-1404), which banned the cultivation of the Gamay grape in Burgundy proper. Until the middle of the 17th century, however, viticulture played only a minor role here. This was also due to the poor transport possibilities of the wine to the large places of purchase, the wine was therefore mainly consumed in the area itself. It was not until the construction of the Briare Canal, which connected the Loire and Seine rivers from 1642 onwards, that the market finally opened up to Paris.

The area extends over 50 kilometres in length and 30 kilometres in width. To the east lies the Sâone river valley, and to the north borders the Burgundian area of Mâconnais, with which Beaujolais overlaps to a small extent. There are two distinct geological areas. In the north, where the best quality wines are produced, granite predominates, but in the south limestone is predominant. The temperate climate, ideal for viticulture, has continental, Atlantic and Mediterranean influences. The vineyards occupy some 22,000 hectares of vines at an altitude of between 200 and 450 metres in 96 municipalities. The market is dominated by large winegrowers' cooperatives. Around 2,500 winegrowers own only small vineyards of a few hectares.

The red Beaujolais is mostly produced from the classic Beaujolais grape Gamay, whose special feature is its white pulp (the full name is Gamay Noir à Jus Blanc). Nowhere else does this variety have any significance. It accounts for 99% of the vineyards. This extreme monoculture resulted after the phylloxera disaster. The tiny remainder is occupied by Aligoté, Chardonnay, Pinot Gris and Melon de Bourgogne for white wine, but these are also allowed up to a maximum of 15% for red wine and rosé. Pinot Noir was allowed to be blended with red wine up to 15% until 2015. Beaujolais Blanc and Rosé are almost unknown outside the area and play no role. The red Beaujolais must be vinified dry and are usually soft or low in tannin, fresh and aromatic.

For the wine known as Beaujolais Nouveau for export or, especially on the French market, as Beaujolais Primeur, the intact, whole grapes are fermented using the carbonic maceration method, which produces a lot of carbonic acid. The fermentation lasts one to two weeks. This allows the aromatic potential of the Gamay grape to be fully developed. The bright ruby-red to bluish wine has relatively high acidity and a fruity aroma. It may be marketed from the third Thursday in November and can be drunk young within a year. The new vintage is released with a big festival in Beaujeu on the Wednesday before the third Thursday in November. There is a torchlight procession, a feast and dancing. At the "Mise en Perce" at midnight, the tapping takes place. Every year, 60 million bottles of the world's favourite wine are produced, 50% of which are exported to 200 countries.

This rapidly produced wine has its lovers, otherwise it would not be so successful. But its critics even deny the drink, also called "lollipop wine", the right to call itself "wine". Due to the special form of fermentation technique used by many winemakers, dropy aromas of bananas, sweets, chewing gum and, at worst, nail varnish (solvent clay) come to the fore. In the book "Burgundy", the British wine author and MoW Anthony Hanson mentions a well-known winegrower from the Beaujolais region who disparagingly calls this fermentation technique "carbonic acid masturbation". So even in Burgundy, despite the sales success, people have an aversion to this type of wine.

The longer-lived and more tannic wines are vinified with the classic mash fermentation and are usually bottled only after one year. Every year on the second Sunday of December, there is an auction (sale) of wines with a charitable purpose. This "Hospices de Beaujeu" was first held in 1797. That was 62 years before the much more famous Hospices de Beaune. The price of a bottle post must be outbid until the flame of a candle is extinguished. The association owns 65 vineyards. A special feature in Beaujolais is the traditional serving bottle Pot Lyonnais with an extremely thick glass base, which allows the previously chilled wine to be kept cool on the table for longer.

The multi-level quality pyramid is based on the Burgundy classification for vineyards or wines, which is common throughout the region. Instead of four, however, there are only three levels, which means there are no Grands Crus:

This simple appellation is open to all winegrowers, but most of it is only used in the southern half of the region, which has around 10,000 hectares of vineyards. Here, clayey limestone soil with sandstone predominates. The wines produced here are much lighter than in the north and do not reach their quality. At least 10% alcohol by volume is required. The most important producers are large cooperatives such as Cave Beaujolaise du Bois-d'Oingt, Cave Coopérative Beaujolaise de St-Verand and Les Vignerons de la Cave Bully. The Beaujolais Supérieur appellation applies to wines with 10.5% alcohol by volume.

The appellation covers around 5,000 hectares of vineyards in the north. The notional dividing line to the south is the commune of Villefranche-sur-Saône. The soils consist of granite, porphyry and slate with sand and clay (without lime). The weathering of the granite rock in the form of quartz sand forms a layer ten centimetres to several metres thick in certain places. This is the soil on which the Gamay grape produces the best results. A total of 38 communes have the right to bear the name after Beaujolais on the label, of which the ten listed below have cru status. If it is a blend of two or more communes, "Beaujolais Villages" must be used. Eight communes have the right to market the wines as Mâcon-Villages and four of them also as Saint-Véran.

Ten communes in the northern area have cru status, but unlike the other appellations, this applies exclusively to red wines. Their vineyards cover around 7,000 hectares. These wines in particular have made the name Beaujolais famous. At first glance, many of them are not recognisable as Beaujolais, as often only the commune appears on the label. Field names and sites can also be added. The communes are Brouilly, Chénas, Chiroubles, Côte-de-Brouilly, Fleurie, Juliénas, Morgon, Moulin-à-Vent, Régnié and Saint-Amour. The wines of the Crus Chénas, Morgon and Moulin-à-Vent are considered the best. Nine crus (except Régnié) may also market wines from Gamay as Bourgogne. Everywhere else in Beaujolais, this is only denied to the (few) wines made from Chardonnay or Pinot Noir.