The liqueur wine area is located in the wine-growing region of Roussillon at the foot of the Pyrenees directly on the Spanish border. It is the southernmost appellation in France. The grapes not used for liqueur wine production are used to produce the AOC Collioure, whose area is congruent with that of Banyuls. The vineyards on steep slopes on the coast facing the Mediterranean Sea cover around 1,400 hectares of vines on slate soils in the four municipalities of Banyuls-sur-Mer, Cerbère, Collioure and Port-Vendres. This is where one of the most famous sweet, fortified vin doux naturel is produced. Due to the poor soil, there are only very low yields of less than 20 hectolitres per hectare. The grapes reach a high degree of ripeness and often shrivel up on the vine like s ultanas (roughly comparable to a Trockenbeerenauslese). In some cases, the mash is already sprayed (mutage sur grains), which causes an intensive extraction of the colour and aroma substances. 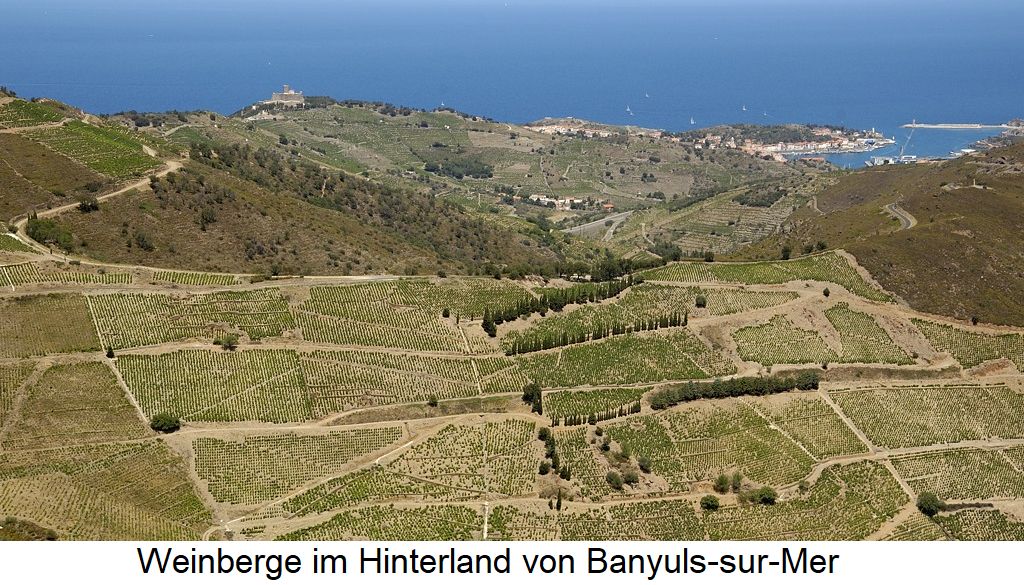 Through frequent decanting, contact with oxygen or oxidative ageing is forced. However, there are also variants without oxygen contact. There are red, rosé and white varieties. When aged, however, there is hardly any difference between the white and the red. They are all blended from Grenache Noir (Garnacha Tinta) with at least 50%, Grenache Gris (Garn acha Roja), Grenache Blanc (Garnacha Blanca), Macabeo, Malvoisie du Roussillon (Torbato), Muscat Blanc and Muscat d'Alexandrie, and a maximum of 10% Carignan Noir (Mazuelo), Cinsaut and Syrah.

The Banyuls Rancio appellation applies to wines aged for up to two years in oak barrels exposed to sunlight. These often develop an amber colour and have the typical rancio flavour (French: goût du rancio, a pronounced aged tone). The designation Banyuls Grand Cru applies to wines that consist of at least 75% Grenache Noir, are vinified from destemmed grapes and have matured for at least 30 months in oak barrels. There is also a Banyuls Grand Cru Rancio.

In this section you will find
currently 147,125 Wines and 23,233 Producers, including 2,225 classified producers.
Rating system Their sources in Wine Guide Tasting samples