The renowned winery in the community of Rohrendorf near Krems in the Lower Austrian wine growing region of Kremstal is one of the oldest and largest in Österreich. In the year 1040 Emperor Heinrich II...
More

The qualities can vary here, but as a rule good to very good wines come from two-star producers, which can be worth looking for.
Learn more about our rating

Weinkellerei Lenz Moser AG, Rohrendorf bei Krems is not a premium member of wein.plus yet.

Set a new bookmark for the wines of Weinkellerei Lenz Moser AG. The currently tasted wines then appear on your personal Wine Reviews homepage.

The renowned winery in the community of Rohrendorf near Krems in the Lower Austrian wine growing region of Kremstal is one of the oldest and largest in Austria. In the year 1040 Emperor Heinrich III. (1017-1056) donated to Ebersberg Abbey from the Order of the Benedictines in Bavaria vineyards and the associated cellar in today's winegrowing community of Rohrendorf. However, parts of the estate cellar were already dug into the mighty loess terraces between 970 and 980. A "Moser" first appears as administrator of Ebersberg Abbey in 1124, he is an ancestor of the Moser family, which has been fully documented since the 16th century. After several changes of ownership and the abolition of serfdom, Anton Moser became the owner of the vineyards and the cellar in Rohrendorf in 1849. In 1880 Laurenz Moser I took over the cellar in Rohrendorf and expanded the vineyard areas.

His son Laurenz Moser II succeeded him in 1913. His son Dr. Laurenz Moser III. (1905-1978) graduated in 1922 from the Klosterneuburg Viticulture Institute. Afterwards he undertook study trips to almost all European wine-growing regions. He took over the estate in 1929 and from the end of the 1920's onwards he undertook experiments with a form of education supported by wire frames, which he called high culture and which is also called Lenz Moser education or Moser culture after him. From 1936 onwards, this was used exclusively in his own company. The textbook "Weinbau einmal anders", published in 1950, was translated into many languages. Moser gave numerous lectures and published many publications at home and abroad.

After the severe winter frost in 1956, the final breakthrough of high culture was achieved. As a result, almost the entire Austrian viticulture was converted to the system within a few years. Laurenz Moser III was mayor for many years and afterwards honorary citizen of his home town Rohrendorf. For his services he was awarded an honorary doctorate from the University of Natural Resources and Applied Life Sciences in Vienna in 1970, and was named "Professor". Out of gratitude, a monument was erected in Rohrendorf in 1980 by the Austrian winegrowers. His son Laurenz Moser IV. (*1929) propagated organic viticulture on a large scale as a pioneer already from the mid 1970s onwards. Under his leadership, the first attempts were made in Austria to develop red wines in barrique (from Mailberg) and he also obtained the cultivation permit for the Cabernet Sauvignon variety from 1982 onwards. In 1986, the vineyards were separated off with the in Rohrendorf and a business under Sepp Moser was run on two sites by Nikolaus Moser.

On September 1, 1986, the Lenz Moser winery was affiliated to the GHG Linz (subsidiary of VOG AG). As number 15 in the family generation, Lenz Moser V. (*1956) took over the management of the company until 1997. At the end of this year he moved to the Californian wine multinational Mondavi and built up the European branch "Robert Mondavi Europe" in Frankfurt am Main in Germany. After the sale of Mondavi to the US Multi Constellation Brands, he returned to Austria in 2005 and founded the independent wine company Laurenz V with two partners.

Already in 1998 the winery had been converted into a public limited company. Today Walter Holzner and Andreas Pirschl manage the "Weinkellerei Lenz Moser AG". Ing. Ernest Großauer is responsible as cellar master. The head office is in Rohrendorf near Krems, from where all marketing and sales activities are controlled. Vinification is carried out per wine type and grape variety in steel tanks, large wooden barrels and barriques. There are often cooperations with winegrowers and winegrowers' cooperatives from Lower Austria and Burgenland that have existed for decades. The winegrowers work according to agreed quality guidelines and are supervised by Lenz-Moser oenologists.

A special feature is the historic 1,000 bucket barrel with a volume of 56,500 litres or 75,333 bottles and an empty weight of 13,000 kilograms. The barrel is decorated with elaborate carvings. The barrel, which has not been used for a long time, has been completely renovated at great expense using oak wood from local forests while preserving the barrel base. In autumn 2017 it was filled with red wine for the first time. The festive inauguration with wine baptism of the barrel was held in November this year. 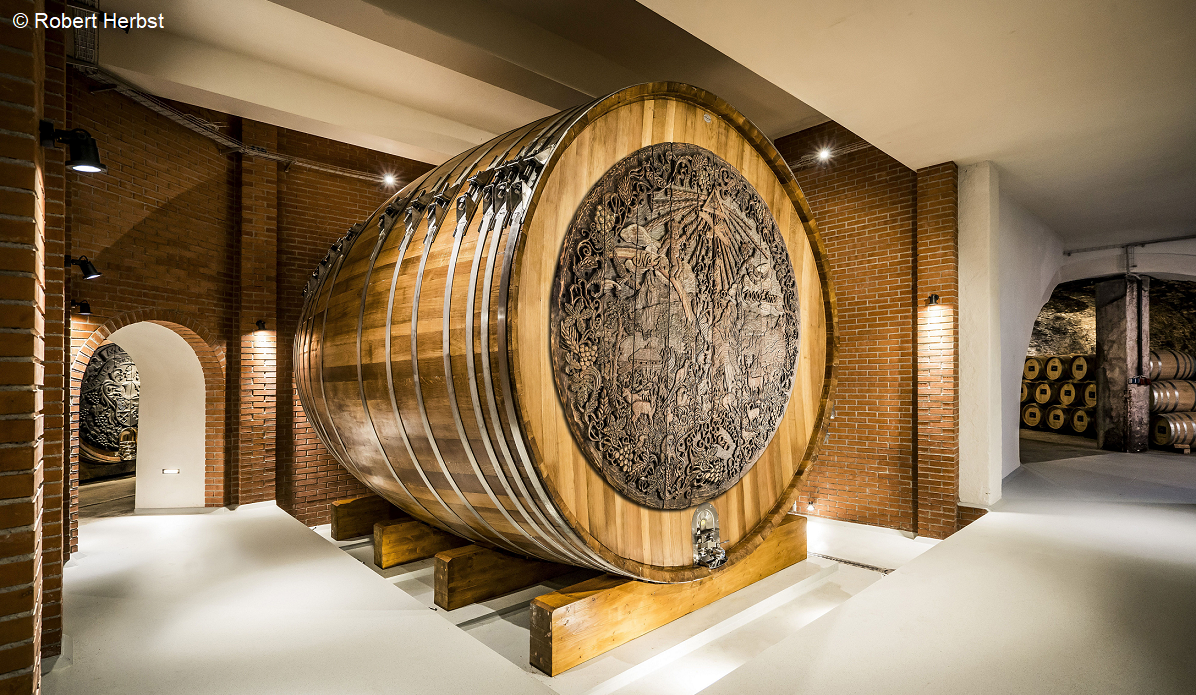 In addition to the parent company, the Klosterkeller Siegendorf in the Leithaberg area of Burgenland has been managed since 1988, and since 1969 the Schlossweingut Malteser Ritterorden in Mailberg in the Weinviertel with a total of 75 hectares of vineyards. The total area is about 2,700 hectares. Around 19 million bottles of wine and sparkling wine are produced annually, of which around a third is exported to Germany, the most important market. The most important wine brands or wine lines are Lenz Moser Prestige, Lenz Moser Selection, Alter Knabe, Fête Rosé, Pfiffikus, Storch and Servus. See also under Lenz Moser Family.