Website: www.weinhof-scheu.de
Social Media:
Work time:
Saturday from 10 to 17 o'clock we are available for tasting, consultation and your purchase. From Monday to Friday via appointment. Please understand that our winery is closed on Sundays and public holidays.

Set a new bookmark for the wines of Weinhof Scheu. The currently tasted wines then appear on your personal Wine Reviews homepage.
Only Members can bookmark

The wines keep constant high level and are usually the best in their respective category in the area.
Learn more about how we rate

About Producer Weinhof Scheu, Schweigen is a premium member of wein.plus 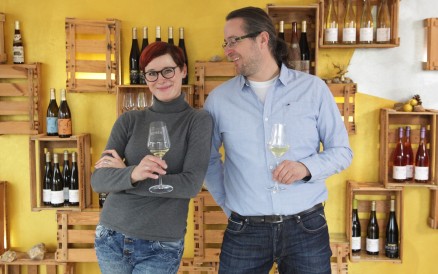 The winery is located in the municipality of Schweigen-Rechtenbach (Südliche Weinstraße area) in the German wine-growing region of Pfalz It was founded in 1964 by Friedel and Günter Scheu, initially a...
More

The winery is located in the municipality of Schweigen-Rechtenbach (Südliche Weinstraße area) in the German wine-growing region of Pfalz. It was founded in 1964 by Friedel and Günter Scheu, initially as a mixed farm and vine-growing business with less than one hectare of vineyards at the time. Since 2009, it has been run by Klaus Scheu. In summer 2015, the construction of a new vinotheque was completed. The modern building is used for events as well as tastings. The vineyards cover 14 hectares of vineyards in the single vineyard Schweigener Sonnenberg. The varieties Riesling (about one third), Pinot Blanc, Pinot Gris, Pinot Noir, Scheurebe and Gewürztraminer are cultivated with a planting density of about 6,000 vines per hectare. The majority of the area is located on French territory in Alsace in the sub-areas of Raedling and Strohlenberg, which earned the owner the name "The Border Crosser", but this is also meant to refer to the style and vinification of the wines

The grapes, which are consistently harvested at low yields and average 45 hl/ha, are mostly harvested by hand in several passes. Vinification is done traditionally by hand. 80% of the wines are matured in stainless steel, the rest in oak barrels. They are marketed in the lines estate wines, local wines (best vineyards) and site wines (best plots). A speciality is the "Philipp Cuntz" wine named after the grandfather of the current farm manager. He discovered a vine in the vineyards that was clearly different in terms of the appearance and taste of the wine. After propagation, this wine has been pressed from it ever since. The customer structure is divided into private customers (30%), trade (60%) and gastronomy (10%). Exports are made to Belgium, the Netherlands, Sweden, Switzerland, the USA and Japan. The winery is a member of the Südpfalz ConneXion association.
Weinhof Scheu Region: Germany Pfalz Südliche Weinstraße
One of the best producers of the region
wein.plus Business Premium Member
In this section you will find
currently 157,948 Wines and 24,563 Producers, including 2,634 classified producers.
Rating system Find+Buy Tasting samples Editorial schedule
Bookmark